Msgr. Mark Merdian, pastor of St. Pius X in Rock Island, shows students from Jordan Catholic School what can be found in a sacristy. "As a priest, you're always teaching," said the Distinguished Pastor of the Year. (Provided photo)

ROCK ISLAND — Most Wednesday afternoons you can find Msgr. Mark Merdian at Jordan Catholic School, where he teaches religion. He had the seventh-graders before the Christmas break, and is working with the eighth-graders this semester. It’s not really an option for him. “Ever since I’ve become a pastor, I’ve made a commitment to teach […] 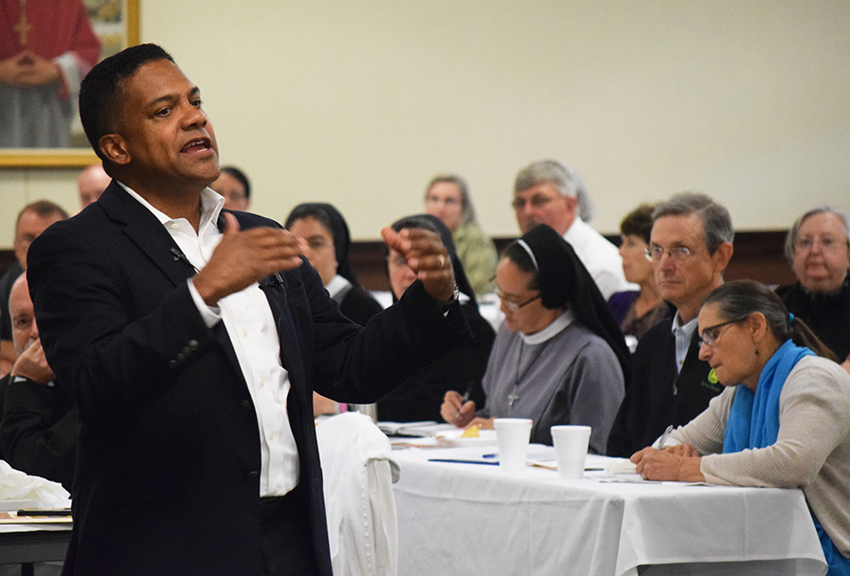 Damon Owens, keynote speaker for a dicoesan conference celebrating the 50th anniversary of Blessed Paul VI's encyclical "Humanae Vitae," makes a point during one of his three presentations Aug. 18 at the Spalding Pastoral Center in Peoria. (The Catholic Post/Tom Dermody)

Acknowledging that to question contraception in today’s culture is “like talking against toothpaste and deodorant,” speakers at a diocesan conference celebrating the 50th anniversary of “Humanae Vitae” invited Catholics to approach the issue with an open heart and faithfully follow Blessed Paul VI’s “clear and true teaching on the meaning of human sexuality.” “I invite […]