MOLINE — A century after a “great historical event” took place at the corner of 17th Avenue and 13th Street, it happened again.

And while that wasn’t really World War I hero Belgian Cardinal Désiré Joseph Mercier waving to cheering crowds that lined both sides of 17th Avenue, the joy and the hope for the future was the same on Sunday as Sacred Heart Parish reenacted the 1919 laying of its church cornerstone.

“We give thanks today that our church has been a beacon of hope in the Moline community for more than 100 years,” said Father Mark DeSutter, pastor, during an outdoor Mass that preceded the reenactment. “And we ask that the persistent prayer that our parishioners have offered throughout the decades would continue in the decades to come.” 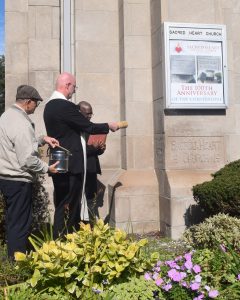 Father Mark DeSutter, pastor, blesses the cornerstone of Sacred Heart Church in Moline, reenacting ceremonies that took place 100 years ago as construction started at the corner of 17th Avenue and 13th Street. (The Catholic Post/Tom Dermody)

The 2019 celebration took place in the shadow of what on Oct. 23, 1919, was only a dream for Belgian immigrants in Moline just after World War I — a magnificent Gothic church with high ceilings and stained glass that reflected the churches of their homeland.

A BEACON THROUGH JOYS, SORROWS

But that dream was energized 100 years ago when Cardinal Mercier — then an internationally renowned figure for his bravery in speaking against the war crimes of the Germans — stopped in Moline during a tour of major U.S. cities to thank our nation for its support.

It became a public holiday, and thousands lined the streets as the cardinal arrived in a parade that took him from the Moline train station to the church.

In the 2019 reenactment, the role of Cardinal Mercier was played by Msgr. Mark Merdian, pastor of St. Pius X Parish and the vicar of the Rock Island Vicariate.

“I hope that doesn’t go to his head,” joked Father DeSutter.

“That’s an interesting thing, isn’t it?” asked Father DeSutter when the announcement drew a few good-natured chuckles. “How far we’ve come in 100 years!”

In her own remarks, Mayor Acri noted how the morning’s weather had changed from a foggy and dreary start to bright sunshine by the end of Mass.

“It’s a nice representation of how Sacred Heart Church has served our community,” she told the group. “In the dark times and cold times we come here as a place of healing, and in the joyful times we come here to celebrate in fellowship.” 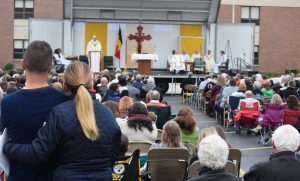 Melissa Schreiner and Ryan Reyes listen as Father Mark DeSutter delivers the homily at the outdoor Mass at Sacred Heart Parish in Moline on Sunday, Oct. 20. The Mass on the parish parking lot preceded the reenactment of the laying of the church cornerstone 100 years ago. (The Catholic Post/Tom Dermody)

“It’s a wonderful thing to see, everyone joined together,” said Mayor Thoms.

The 2019 celebration also united two nations. In the assembly at the outdoor Mass and taking part in the parade was a delegation from Belgium. The Belgian anthem was played during the reenactment.

In his homily, Father DeSutter paid homage to his maternal grandfather, who came to the United States alone at the age of 17 near the turn of the 20th century.

“He was placed on an ocean liner to America,” said Father DeSutter. “He had just a few dollars in his pocket. He spoke no English. He had a fifth grade education.”

He would go on to fight for the United States in World War I, work in a foundry, and farm in the Kewanee area.

“He hung onto his faith tenaciously,” said Father DeSutter, adding that his grandfather’s life parallels the history of Sacred Heart Parish, which was founded by Father John Baptist Culemans, an immigrant from Belgium.

During the Mass, descendants from parish charter families took part in the offertory procession, and a chalice that belonged to Father Culemans was used in the liturgy. Among the concelebrants was Msgr. Dale Wellman, former pastor. 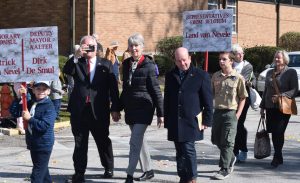 Representatives from Belgium march in the parade toward Sacred Heart Church in Moline on Oct. 20. (The Catholic Post/Tom Dermody)

Members of various religious communities that served at Sacred Heart and Seton schools — including the Heading Avenue Franciscans and the Rock Island Benedictines — were in attendance and recognized.

Msgr. Merdian prayed that Sacred Heart Church will “continue to be a sign of God’s love and healing among us here today. He ended his remarks with the Latin phrase, “Ad multos annos,” which means “Many more years.”

“Can you say that in Flemish?” quipped Father DeSutter.

EDITOR’S NOTE: More than a dozen additional photos from this event at Sacred Heart, Moline, have been posted to The Catholic Post’s site on Facebook.