Love was at the heart of Msgr. Mark Merdian’s homily at the annual Jubilarian Mass on June 21 — the love that Jesus has for all people and the love that priests are called to give in imitation of the Good Shepherd.

“In every parish where I have loved my people as Jesus loved and spent myself in their service, I have been abundantly blessed, and the parish has grown spiritually,” said Msgr. Merdian, pastor of St. Pius X in Rock Island, who is celebrating his 25th anniversary of ordination this year. “Whenever I have selfishly served myself, I have not been a good witness to Jesus, who came to serve and not be served, and I have not helped our people grow closer to the Lord.” 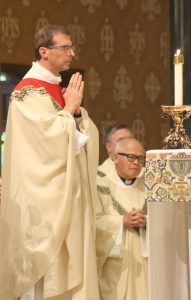 Msgr. Mark Merdian, who is celebrating 25 years of priestly ministry, and Msgr. Jerome Ham, who is marking his 50th anniversary, concelebrate the Jubilarian Mass with Bishop Jenky on June 21 at St. Mary’s Cathedral in Peoria. Msgr. Merdian was the homilist for the annual liturgy. (The Catholic Post/Jennifer Willems)

Serving like Jesus served includes working together to lead the people of God to heaven, he said.

At the beginning of the liturgy at St. Mary’s Cathedral in Peoria, Bishop Daniel R. Jenky, CSC, expressed his gratitude to the jubilarians for doing just that.

“Thank you for all you’ve done to build up the body of Christ in this diocese,” he said.

The bishop also heard words of thanks before the Mass ended.

“As we honor our jubilarians — in fact, as we honor all our priests on their jubilees — we want to especially congratulate Bishop Daniel Jenky for his leadership of the diocese and the leadership he has given each of us, his brother priests,” said Msgr. Paul Showalter, who recently retired as vicar general of the Diocese of Peoria. He added that they gladly serve the bishop and the diocese.

Recognized in a special way at the Mass were Father Richard F. Bresnahan and Father David F. Roche for 60 years of priestly service, and Msgr. Jerome Ham for 50 years.

In addition to Msgr. Merdian, the priests who are celebrating their 25th anniversary of ordination are Father Deus-Dedit B. Byabato, Father Thomas Gibson, Father Michael Menner, Father Jeffery A. Small, and Father Stephen A. Willard.

The two newest priests of the Diocese of Peoria, Father Ryan Mattingly and Father Andru O’Brien, also received a warm welcome during the Mass. 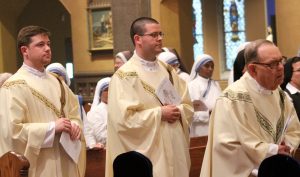 The newest priests of the Diocese of Peoria, Father Andru O’Brien and Father Ryan Mattingly, process into St. Mary’s Cathedral behind Msgr. James Swaner of Uitca, a senior priest, at the beginning of the Jubilarian Mass on June 21. (The Catholic Post/Jennifer Willems)

In his homily, Msgr. Merdian acknowledged that no matter how long a priest has been ordained, he has probably seen the breakdown of the family, dysfunctional marriages and people hurting for a variety of reasons.

“These are challenging times, aren’t they? But they are not without hope and joy,” he said.

“When we accompany people and help them encounter the Lord Jesus, we will be given the strength to see that the people are full of understanding and are God-loving people, that there is goodness, holiness, spiritual beauty, sacrificial love and generosity emanating from the faith of the people,” he told the priests, women religious and lay people gathered in the cathedral.

He said the most important lesson he has learned is that priests help the people entrusted to their care by loving and serving as Jesus did, as well as through their sacramental ministry and a life of dedicated prayer.

“May we always be priests in the image and likeness of Jesus, our high priest, who lived and gave himself in love,” Msgr. Merdian said.