ROCK ISLAND — Beating the heat is something the children of Amka Afrika School in Babati, Tanzania, work at most of the year. They will have help soon, however, thanks to the children of Jordan Catholic School and Sewing for Jesus.

The club, started last September by fourth grade teacher Debbie Patronagio, taught the students how to sew, but for a purpose. Using pillowcases, they made dresses for their African counterparts to wear when not in class. 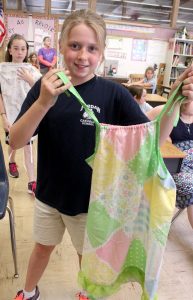 Fourth-grader Hailey Ross (left) holds up the dress she made out of a pillowcase as part of Sewing for Jesus at Jordan Catholic School in Rock Island. (The Catholic Post/Jennifer Willems)

They reached their goal of 100 dresses and were able to add about 40 more with help from Patronagio and other interested parishioners. The teacher also collected two boxes of shorts so the Amka Afrika boys would not feel left out.

Attached to each dress was a signed note, handwritten in Swahili, from club members: “Made with love by Sewing for Jesus, Jordan Catholic School.”

All of the clothing was blessed by Msgr. Mark Merdian, pastor of St. Pius X Parish in Rock Island, and presented to Ann McConachie, founder of the Amka Afrika School Foundation, when she visited May 18.

“I’m impressed with all the borders and extra details you put on each dress,” McConachie, a retired teacher from Downers Grove, told club members. “The girls are going to be excited by all the special things you did. . . . They’re just darling. You should be very proud.”

She added that their thoughtfulness provides more than just a change of clothes.

“It helps our kids to know that there are people all the way over in the United States who care about them. That makes a big difference to them,” McConachie said.

“They don’t have a lot over there, so the fact that you were willing to do that — they will be very appreciative of your efforts,” she said. “Thank you very much.”

Sewing for Jesus grew out of Patronagio’s desire to do something that would make a difference. She was inspired by a project called “Little Dresses for Africa.” 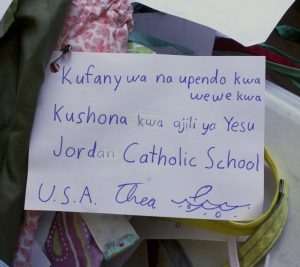 Each dress bears a signed note, handwritten in Swahili, that says “Made with love by Sewing for Jesus, Jordan Catholic School.”

“In Africa or any other Third World country they don’t have the means to repair zippers or buy buttons,” she explained, noting that the dresses made of pillowcases are gathered at the neck and have ties at the shoulder.

She opened the club to students in fourth through eighth grades, but found it was most popular with third-, fourth-, and fifth-graders because they weren’t involved yet in sports or other outside activities. Sewing for Jesus met after school on the first and third Mondays of the month and attracted about 20 members, including some homeschool students and boys.

The pillowcases and notions used to make the dresses were donated.

While they were sewing, they talked about the corporal works of mercy and used St. Mother Teresa as an example.

“We talked about how lucky we are for all that we have and that any little thing that we can do, we’re doing it for Jesus,” Patronagio said.

They learned more from McConachie, who fielded questions about life, food, games and school in Africa for nearly 30 minutes.

She told them Amka Afrika School started with about 25 students in 2011. It now has 420 students from preschool (age 3) to Class Seven, which is roughly the same as seventh grade in the United States.

She was introduced to Amka Afrika, which means “Wake up, Africa” in Swahili, while on a safari with a group of 25 people, including Vern and Loma Wegerer of Moline. She visited for a week and returned to Illinois determined to help the fledgling school. 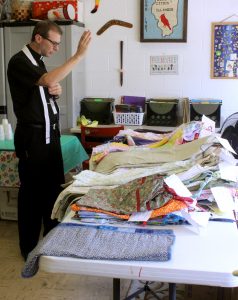 Msgr. Mark Merdian blesses the dresses made by Sewing for Jesus. (The Catholic Post/Jennifer Willems)

“I could see that it was something I had the skills to do. It was just kind of a fit,” McConachie told The Post.

She doubted whether she could make a big change and worried that she was in over her head, but said people “came out of the woodwork” to help her.

Vern Wegerer, who has managed such diocesan projects as construction of the Spalding Pastoral Center in Peoria, was one of them. He set about furnishing the school, which had a dirt floor and no windows or doors, with surplus desks, tables, chairs, filing cabinets, maps and other supplies from the former St. Joseph and Sacred Heart schools in Rock Island.

In addition, he and Loma have sponsored a bright, friendly girl at Amka Afrika who wants to be a doctor. Education for girls is not a priority in that society, he said.

“If she’s got a goal to be a doctor and she’s an outgoing person and she’s got an education in front of her, I hope she makes it,” Wegerer said.

Sewing for Jesus gave students an opportunity to try something new and “just do something nice for Tanzania,” said fourth-grader Hailey Ross.

“It’s fun to know that they know we care, that we made these for them and have been thinking of them,” added Alyssa Wright, also a fourth-grader at Jordan Catholic.

Patronagio said she is thinking of having club members make sit-upons for Amka Afrika next year.

If the club continues next year, would the girls be part of it again?

“Definitely,” they said in tandem.

For more information on the Tanzanian school, visit the website for the Amka Afrika School Foundation.