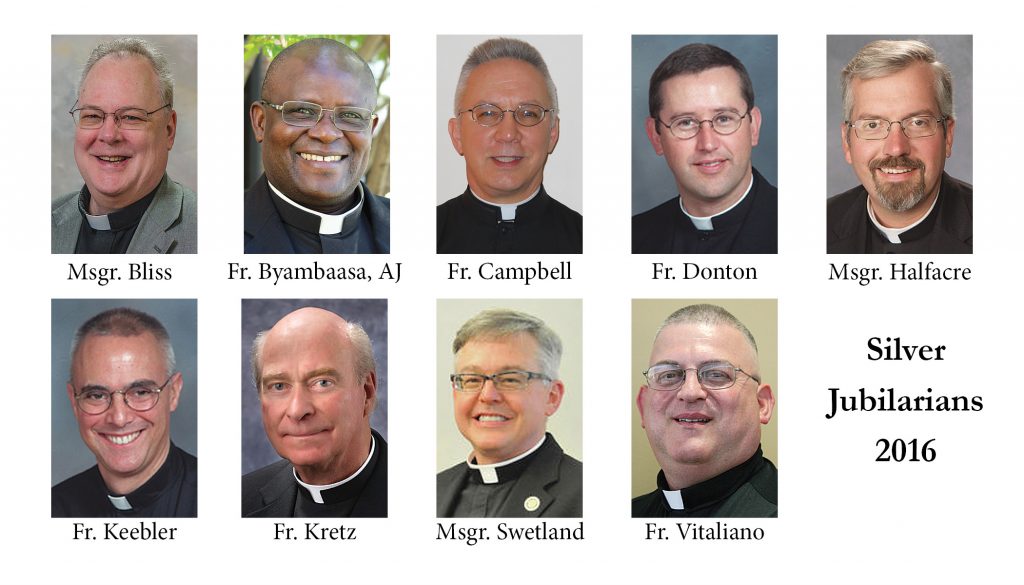 Part of the largest ordination class the Diocese of Peoria had seen in a quarter of a century, the priests who are celebrating their silver jubilee this year did not even fit in the sanctuary of St. Mary’s Cathedral in Peoria when it came time to lay prostrate during the Litany of the Saints. The center aisle of the cathedral had to be used to accommodate them all.

Msgr. Michael Bliss, Father Dwight Campbell, Father Joseph Donton, Msgr. Philip Halfacre, Father William Keebler, Father James Kretz, Msgr. Stuart Swetland and Father Dominic Vitaliano, were among those who were ordained on May 25, 1991, by Bishop (now Archbishop) John J. Myers. They will be honored in a variety of ways this spring for 25 years of priestly service given to the Diocese of Peoria and the church at large.

Father Rogers Byambaasa, the chaplain at OSF St. Joseph Medical Center in Bloomington, is also celebrating his silver jubilee in 2016. He was ordained for the Apostles of Jesus Missionaries on July 7, 1991.

The Catholic Post posed nine questions to each of the silver jubilarians and asked them to answer at least five of them. Their responses, as well as a listing of their assignments and celebration plans, can be found by clicking on their names above.