Msgr. Swetland is the president of Donnelly College in Kansas City, Kansas, and also serves as professor of Leadership and Christian Ethics there. Prior to that, he was vice president for Catholic Identity and Mission and held the Archbishop Flynn Chair of Christian Ethics at Mount St. Mary’s University in Emmitsburg, Maryland. 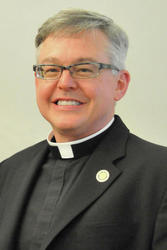 Born in Pittsburgh, Pennsylvania, Msgr. Swetland holds a bachelor’s degree in physics from the United States Naval Academy. He was elected a Rhodes Scholar in 1981 and received bachelor’s and master’s degrees in politics, philosophy and economics from Oxford University in England. While there, he entered the Catholic Church.

He studied for the priesthood at Mount St. Mary’s Seminary, earning a master’s degree in divinity in 1990 and a master’s degree in moral theology in 1991. He also holds a licentiate and a doctorate in sacred theology from the Pontifical Lateran University, having studied at the John Paul II Institute for Studies on Marriage and Family in Washington, D.C.

After ordination, Msgr. Swetland assisted at St. Peter in Peoria while he served as administrative assistant to Bishop (now Archbishop) John J. Myers. He would be named pastor at St. Peter and chaplain at the St. Joseph Newman Center at Bradley University in 1992, and pastor at St. Martin de Porres in Peoria in 1993, retaining his duties as chaplain at the Newman Center.

When he returned from his graduate studies, Msgr. Swetland was assigned to be chaplain at St. John’s Catholic Newman Center at the University of Illinois in Champaign. He was named director of campus ministry for the Diocese of Peoria in 1998, and episcopal vicar for social justice in 1999.

He was made a Prelate of Honor with the title of monsignor in 2000.

Msgr. Swetland began his ministry at Mount St. Mary’s University and Seminary in 2006. He has been leading Donnelly College since 2014.

He has also served as executive director of the Center for the Advancement of Catholic Higher Education, executive secretary for the Fellowship of Catholic Scholars, and theological adviser to the Catholic Conference of Illinois.

While he doesn’t have a celebration planned, Msgr. Swetland hopes to be leading a pilgrimage to France in June.

I knew at a very young age that I was called to ministry; however, it took me answering the call to become Catholic to realize that call to ministry was a call to the priesthood. If you had asked me what I wanted to be around age 5 or 6, I would have answered something in the realm of ministry. It was after college and graduate school, when I became Catholic, that I began to recognize God’s call to Holy Orders, in my prayer and meditation. It was after several years of being Catholic, when I realized I should have answered the call already, that I joined the seminary.

Who has been the biggest influence on your vocation and why?

This is probably what most priests would say, but to be honest, it was my mother who helped me realize my vocation to ministry. Although she did not become Catholic until toward the end of her life, her very strong influence on the importance or prayer, Sacred Scripture, and recognizing that God has a plan and purpose for every person helped me to recognize Gods call to ministry.

My mother had many phrases she used to encourage a holy life, one being “to whom much is given much is expected.” In fact, many of the phrases she used have found a place in and around my office. One important phrase was, “The will of God will never lead you where the grace of God cannot keep you.” She also used to say, “If God bid ye to ride, he will find ye the horse.” All of these I have carried with me through my discernment and ministry as a priest.

When I was ordained, I was full of enthusiasm for the church’s teaching. I would even go as far as to say I was much more polemic than prudent. I was also very involved in the “cultural wars” that were around at the time, which seem quaint compared to the issues and problems we face today. I’ve realized that it is much more important to serve people where they are at, and I hope that I have grown in my sense of inclusiveness and diversity. I have also spent a great deal of time serving those who would not otherwise be served, making sure that all people are included in what the church has to offer.

Nothing gives me more joy than to celebrate the sacraments, especially Mass and reconciliation. I would also like to add to that list my love of preaching and teaching. As the Second Vatican Council taught, the primary vocation of the priest is the proclamation of the Gospel to all. To achieve this call, we must celebrate the sacraments, as well as preach and teach the Gospel. My vocation has been focused on those three things.

I could go on and on about prayer and its importance, but it is Scripture and meditation that is the center of my prayer life and subjectively the center of my spiritual life. Objectively, however, the most important part is the Mass, which is the source and summit of who we are as Christians.

We are more attentive to those on the margins and those in need. We also recognize the great need for healing and mercy in our time. You will not be successful preaching the Gospel if you try to argue anyone into faith. We should be in the business of helping people come into the relationship with God.

Romans 8:28: “For we know that all things work together for good for those who love God and are called according to his purpose.”

This letter of Paul to a church he did not know and did not found is an amazing statement. For Paul, what it means to be a Christian is to be a person who knows that if you are following the will of God as best as you can discern it and you are loving the Lord with all your heart mind and soul, as best you can, then everything will work together for good. It might not be how you plan it or want it but it will work together for good. I have seen that time and time again in my priesthood and in the lives of others as well.

Name a profound experience of mercy, either given or received, and the impact it has had on your priesthood.

There was once a place where I was serving and I decided to put on an extra time for confession. I was unsure if this was something that I should do – I did it almost on a whim at the request of some people. So I prayed to God as I started this new time of confession that if he wanted me to do this, he should make it clear I was doing the right thing.

The next week he sent me an incredible number of people who wanted the sacrament and many, many people who had been away from the sacrament for years. It was an amazing answer to prayer and a sign that God wanted as many times as possible for the confessional to be open and available to people in this great sacrament of mercy.