Father Rogers was born in Kabale, Uganda, in East Africa. He was considered a late vocation when he entered the Apostles of Jesus at 23 to study for the priesthood.

His perseverance paid off, however. Of the 56 men who started the novitiate, only 14 went on to the priesthood — including Father Rogers. 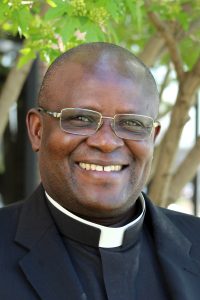 He taught and offered spiritual direction at the Apostles of Jesus Kiserian minor seminary in Kenya for a time and worked as pastor of St. Luke Church in Loitikitok and Ugandan Martyrs Church in Kibirichia, both in Kenya, before coming to the United States in 2001. He was named assistant chaplain at OSF Saint Francis Medical Center in Peoria that year, and has been chaplain at OSF St. Joseph Medical Center in Bloomington since 2013.

Father Rogers will celebrate a Mass of Thanksgiving on Thursday, July 7, in the chapel of OSF St. Joseph. It will begin at 11 a.m.

He is planning another Mass of Thanksgiving on Dec. 27, in Nyabirerema village, Bukinda sub-county, Kabale district, Uganda, which will begin at 10 a.m. (East Africa Time). A lunch will follow.

Everyone is invited to both celebrations, he said.

I was born and raised in a Catholic family by parents who were very staunch Catholics with great faith. . . . As far (back) as I can remember, we never ate lunch or dinner without praying. I grew up going with my parents for Mass on Sundays. Our eldest brother was in the seminary but dropped out. So I grew up knowing that my parents would be happy to have any of their sons as a priest.

One of my pastors, the late Father Didas Barisigara had a very good voice and used to sing very well the Second Eucharistic Prayer during Mass. I used to listen attentively and I liked it. He was inspiring with his beautiful voice.

There was another priest, the late Father Simeo Bakandusya, who was a visiting priest at our parish. After Mass on Sunday he spent his time greeting and talking with parishioners. He was well-dressed in black pants, black clergy shirt, black belt and black shoes. He really looked good and was a happy priest. I liked that way of dressing as a priest. So my Catholic family background and the two model priests were my early indicators . . . to liking priesthood. There are many other examples that paved my way into liking the Catholic faith and Catholic priesthood.

How did you know you were being called?

When I was in the seventh grade, I wanted to join the seminary but I failed the interview with my pastor then, who could not recommend me because I was not one of the altar boys at the parish.

I applied to join the minor seminary of the Apostles of Jesus, but our grade school principal did not submit my application in time and, therefore, I was not admitted to the seminary.

In 1983, I left my paid teaching job and joined the Apostles of Jesus as a late vocation, as it was called back then. Being evaluated and allowed to continue at different stages of religious and priestly formation, such as postulancy, novitiate, first profession of vows, perpetual profession of vows, diaconate and finally priesthood on July 7, 1991, while many of my classmates dropped out or were discontinued because of one reason or other . . . were critical moments of reflection, of decision-making, and signs or indicators to know that I was being called by God to serve as a priest in his church and the religious institute of the Apostles of Jesus. . . .

My parents (deceased), siblings, nephews and nieces, and all of my relatives. These have always formed a strong family support system and encouragement for me.

And there are two priests of the Apostles of Jesus who passionately love the gift of priestly vocation and are very happy and grateful that they are priests. When I talk with them, I notice that passion and the love for priesthood and the efforts they make to keep and protect the dignity and integrity of priesthood in their daily lives. . . .

I now understand better that priesthood is a vocation, not a career. You must love it and sacrifice without any benefits. It is not something you do for a living but it is a sacred call to serve God and the church. The different work experiences, such as grade school and high school teacher, spiritual director in a seminary, assistant pastor and pastor, and hospital chaplain for the last 15 years have made me grow into a mature, responsible priest.

I was born and raised in Uganda, however, I have had an exposure to different peoples and cultures of different ethnic groups by working in countries such as Kenya and the United States since my priestly ordination. . . . This exposure has enriched me in many ways in a spirit of the enculturation of the Gospel and acculturation that is adapting to other cultures and acquiring knowledge and skills specific to that culture in order to preach the Gospel.

Celebrating the Holy Eucharist of the Mass for the people of God and other sacraments which nourish the faith and bring people closer to Jesus has given me the most joy in my priesthood. Also being part of the essential ministry of Jesus of healing the wounded, binding what is broken, and bringing home what has been lost, especially in a hospital setting for 15 years is the most joyful experience.

Feeling accepted for who I am and for what I am in all my working places and having priest-friends who are close have also given a lot of joy in my priesthood.

My first assignment was in the minor seminary as a spiritual director and a teacher. . . . I was asked to teach Christian religious education in the junior and senior classes. By the time I left for another assignment, the students had already developed great interest in the CRE lessons and at the end-of-year national examinations, 18 out of 24 students in the senior class got a B+ grade. This was a big achievement, that I could impact the students to like the CRE lessons. . . .

Another highlight is in the hospital as a chaplain for the last 15 years. Being there as a Catholic priest for Catholic and non-Catholic patients who are dying, who are very critical, in the emergency room, and being there for the families at the bedside, bereaved families, has been the greatest apostolate of my 25 years of priesthood. I thank God every day for such a sacramental ministry in a hospital setting.

There are three Scripture passages that stand out for me: “How shall I make a return to the Lord for all the good he has done for me? The cup of salvation I will take up, and I will call upon the name of the Lord (Psalm 116:12); “The Almighty has done great things for me, and holy is his name (Luke 1:49); and “If you, O Lord, were to mark our guilt, Lord who would survive? But you, Lord, are full of mercy and forgiveness (Psalm 130:3).