Father Keebler was born in Daytona Beach, Florida. He attended Stetson University in DeLand, Florida, and studied for the priesthood at Holy Apostles Seminary in Cromwell, Connecticut, where he earned a master’s degree in theology and a master of divinity degree. 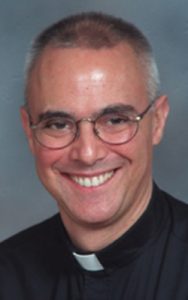 His first assignment was as parochial vicar at Immaculate Conception in Streator. He went to St. Edward in Chillicothe in 1993, and St. Patrick in LaSalle in 1994. He served as chaplain at St. Joseph Nursing Home in Lacon for two years before being named pastor at St. Theresa in Alexis and St. Aloysius in Wataga.

In 1998, Father Keebler was assigned to St. Lawrence in Penfield and Holy Trinity in Rankin, which he would serve as administrator for one year and then pastor for one year. In 2000, he was named pastor of the Penfield parish and St. Elizabeth of Hungary in Thomasboro, and in 2001, he was given responsibility for the Penfield and Rankin faith communities, and St. Charles Borromeo in Homer.

Father Keebler was released for work in the Archdiocese of Indianapolis in 2006. When he returned in 2009, he served as pastor of St. Patrick in Tolono for two years and then as administrator of St. Rose in Rushville for one year. He has been parochial vicar at St. Mary in Pontiac, St. Joseph in Flanagan, and St. John in Cullom since 2012, and added St. Paul in Odell in 2013.

When I was in high school I was not even a Catholic. I remember reasoning that since there is a good God, then there is a church in which a relationship with His people would be established. Since God is good, His desire to  enter into a relationship with His people through the sacraments, especially the Real Presence and the Mass, is the total offering of God to the Father and to the church. With that I become a Catholic.

The parish priest at Good Shepherd Parish in Winchester, Tennessee, Father John Baltz, took an interest in me and basically taught me the faith and brought me into the church (this was 1972 and there was no RCIA that I knew of at that time). I remember waiting for Mass to begin and looking at the tabernacle knowing that here is where God dwells among ordinary, everyday people. The good impact that priest made on me in those days was far greater than I can grasp, but what I knew was that what he was is what was meant for me. I was given a great example of priestly holiness and for that I am truly grateful.

I would say I am much different and here’s why. The basic structure of the liturgy and prayer, as well as the entire structure of the church, guarantees something entirely different from a life of sin and separation from God. Over the years entering more deeply into the mystery of the church, the Body of Christ, gave me the possibility of personal virtue, and taking advantage of God’s grace in the good sense literally makes you a good man and a good priest and this I strive for.

What has given me the most joy in the priesthood is knowing that I am doing what God wants me to do and through Divine Providence being where I am supposed to be. As a priest, the liturgy and sacraments, prayer and other aspects of a priest’s life, particularly being with His people, has given me the greatest joy. ‘

The highlights of my various assignments are many. . . . I remember one moment in particular when, during the Jubilee Year 2000, I was able to be present at and help out with Communion at St. Peter’s in Rome during the Mass of Sts. Peter and Paul. Pope St. John Paul II was the celebrant of that Mass and I was just feet away from the saintly pope along with many other priests from various parts of the world. It was an outdoor Mass on the square and that was an experience I will be able to take with me forever. I am truly grateful for my vocation.