Msgr. Bliss was born in Florissant, Missouri. He has a bachelor’s degree in political science from Christendom College in Front Royal, Virginia, and studied for the priesthood at Holy Apostles Seminary in Cromwell, Connecticut, where he earned a master’s degree in Scripture and a master’s of divinity degree. 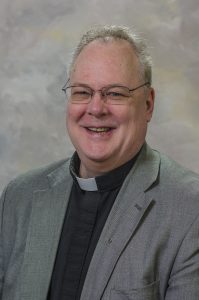 After ordination he served as parochial vicar at Sacred Heart Parish in Moline for two years and at St. John’s Catholic Chapel in Champaign for three years. He began his hospital ministry in 1996, when he was named assistant chaplain at OSF Saint Francis Medical Center in Peoria. He has been chaplain since 1998 and is also director of pastoral care there.

The seed of my vocation was first perceived when I served as an altar boy. It was later more fully realized during my college years.

The memories of the parish priests when I was a boy continue to inspire me. The faith of my parents. The example of many of the priests of the Peoria diocese.

How are you a different priest today than when you were 25 years ago?

I feel more confident with experience. I see my vocation more as a means to continue to develop my relationship with God — understanding Him, loving Him, being a friend of Him — as opposed to service or doing things for Him. That part is secondary to the continuing development of a loving friendship with Him.

Presenting the Truth to a person and see him/her respond to it with recognition and acceptance. The greatest sorrow is to have a person recognize the Truth but walk away like the young rich man in the Gospels. Such an experience gives me insight into the sorrow our Lord felt when others walked away.

All the fundamentals: the Mass, the Divine Office, the rosary, Eucharistic Adoration, stories of the saints, as well as the faith of others.

Name a profound experience of mercy, either given or received, and the impact it has had on your ministry.

The salvation of a young man suffering from alcoholism. It taught me never to give up on someone or think that a situation is hopeless, “that no one is beyond the gaze of our Heavenly Father.” (Pope St. John Paul II)