A native of Pennsylvania, Father Kretz attended Temple Tech Institute in Philadelphia, where he earned an associate’s degree in computers and electronics. He also holds a bachelor’s degree in marketing from Temple University. 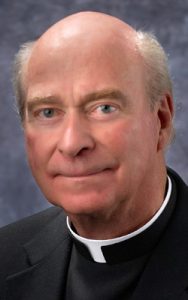 He received a master’s degree in philosophical theology from Holy Apostles Seminary in Cromwell, Connecticut.

Father Kretz’s first assignments were as parochial vicar at St. Patrick Church of Merna in Bloomington and Epiphany Parish in Normal. In 1993 he was named pastor of St. Ann Parish in Toluca and Sacred Heart in Rutland. He would remain there until 2008, when he was assigned to serve as a chaplain at OSF St. Joseph Medical Center in Bloomington.

He was granted senior priest status in 2009.

Father Kretz said he is planning a private celebration for his anniversary. Mail may be sent to him at 2705 Westbrook Drive, Bloomington, IL 61705.

We who answer the call to priesthood become “continuators” of our Lord and Savior Jesus Christ. We continue the word of the Son of God that He began more than 2,000 years ago. We are given the command to save souls through forgiveness of sins and through the distribution of the sacraments.

We were not called to be administrators, financial wizards, accountants or maintenance men, even though those duties and many other non-sacramental responsibilities take up the majority of our time. Our primary mission given to us by the authority of Jesus Christ through Peter and his successors is the power to remit sins and to offer the Most Holy Sacrifice of the Mass. We help to save those who have been saved by the Blood of Jesus.

But men continue to fall into the death of sin, so that it is necessary for them to be continuously washed in the Blood of Christ, 70 and 70 times seven, by those who have the authority to do so, so that they may not be a victim of eternal death. We, as continuators of Christ, fulfill this mission until the end of time.

We, as continuators, are commanded to convert the world and ourselves to Christ, who directed us to go forth and teach the Gospels to the whole world, baptizing them in the name of the Father, the Son and the Holy Spirit, and gave us the authority “whose sins you forgive they are forgiven” (John 20:23), always performing this action in all meekness, patience and compassion.

This is what drew me to the priesthood through an interior calling to help others as well as myself along the bumpy, pot-holed, debris-stewn road toward salvation.

Even though the mission of the priesthood always remains the same, the priest is constantly being honed through many diverse experiences, and so one becomes a little smarter as each year passes and one becomes closer to the Blessed Trinity with a deeper understanding of one’s responsibility to do everything possible to prevent even one soul from being lost to God.

Jesus Christ instituted the Sacrament of Holy Orders and the Holy Eucharist at the Last Supper, as the Council of Trent teaches, when He made priests of his apostles and enjoined them, “Do this in memory of me.” (1 Corinthians 11:24) He did not say, “Tell this story, describe this action of mine to your children and to future generations.” He said, rather, “Do this, re-do this, continue to do this which I have done.”

It is very important that we realize the Holy Sacrifice of the Mass is both a sacrament and a sacrifice. The Eucharist as sacrament comes to us from the sacrifice of Jesus Christ on the cross. Without the cross there would be no Sacrament of the Eucharist or any of the other sacraments, including the priesthood.

Over the last generation the perception of the dignity of the priesthood has changed due to the influence of worldly allurements and the perceived changes in the church since Vatican II and its leadership within the highest ranks causing some confusion in the minds of the laity between dogma and doctrine. But the mission will always remain the same — the salvation of souls for Christ.

If the sacraments should ever change and the Most Holy Eucharist is no longer considered to be the body and blood, soul and divinity of Jesus Christ, but rather some global symbol of common oneness, then the Mass and the priesthood will no longer exist and without the Mass, the world itself would no longer have a reason to exist.

The past 25 years have seen the majority of my time spent as a parish priest, with my last year as hospital chaplain. I enjoyed both positions very much, the obvious difference being that the people of the parish didn’t need me in the same way as the hospital patients. However, I was delighted to experience both ministries because of the gratitude and kindness demonstrated toward the priesthood of Jesus Christ.