Born in New Jersey, Father Vitaliano grew up in Miami, Florida. He enlisted in the U.S. Air Force in 1979 to serve his country and see the world, and discovered a deep love for his Catholic faith and a priestly vocation along the way. 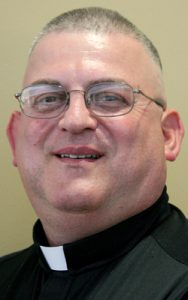 He studied for the priesthood at Holy Apostles College and Seminary in Cromwell, Connecticut, earning master’s degrees in divinity and dogmatic theology. He told The Catholic Post in 2013 that he decided to apply to the Diocese of Peoria after meeting seminarians from central Illinois during his seminary days.

Father Vitaliano served as parochial vicar at St. Mary in Pontiac and St. Pius X in Rock Island, before being named pastor for St. Lawrence in Penfield and Holy Trinity in Rankin. He would also lead St. Thomas in Philo and Immaculate Conception in Bongard, and then St. Luke in Eureka before seeking permission to go back to the Air Force as a chaplain in 2000.

Since he returned to Diocese of Peoria three years ago, Father Vitaliano has served as pastor of St. Bernard in Bushnell and St. Augustine in St. Augustine, as well as chaplain at St. Francis of Assisi Catholic Newman Center at Western Illinois University in Macomb.

He will celebrate his anniversary with a Mass of Thanksgiving at 4 p.m. on Saturday, June 11, at St. Bernard.

What drew you to the priesthood? Who has been the biggest influence on your vocation?

God gave me the gift of Father Dick Dzik, a retired Chicago policeman who became a priest and then went into the military as a chaplain. He was my spiritual director, a good friend, and one day he invited me to a young adult weekend retreat. During the retreat he said to me, “Dominic, you have to live your life the way you want it written on your gravestone. If you do not like the way you are living your life, you have to change it today. Change it today, because you may not have a tomorrow.” Those words were prophetic and soul searching for me.

Father Dzik and I had long talks about the priesthood, about my job in the military and the seminary. Looking back, God was speaking through him. After all of this I think God was calling me to the priesthood all my life, but I just did not pay attention. Well, God caught my attention. The Monday after that weekend retreat when Father Dzik gave me that speech, he had a massive heart attack and died in the back office at Chapel 2 at Kadena Air Base, Japan. Father Dzik was a very big influence on me in my call to the priesthood.

Of all the popes, St. Pope John Paul II had the greatest influence on me as a priest and my vocation. He set the theological path for me and what a joy it was to shake his hand in Denver at World Youth Day in 1993. I shook the hand of a saint. I will never forget how he looked into my eyes and stared deeply into my soul, not letting go of my hand, encouraging me to be strong and faithful to Christ.

There have been many other joys such as baptizing so many infants, children and adults, preparing couples for the sacrament of marriage, completing lots of marriage cases and giving some well-prepared homilies. It is always a joy to offer the Mass and to nourish God’s people, giving them sustenance for their spiritual journey. There is the joy of the People of God, loving and trusting their pastor, because he keeps them close to his heart as a shepherd cares for his sheep. I still get calls and emails from people in the military.

It is a joy to anoint a Catholic who is dying before they pass on to Jesus and it reminds me that I, as a priest, am an instrument of His peace and grace. Absolving the repentant sinner is a great joy, especially when it has been 20 or 40 years since their last confession. What a joy to bring Christ’s mercy to souls!

My greatest joy was my ordination. . . .

All of this could not be possible without regular confession for me as a priest, praying the Divine Office, offering up the daily rosary and visiting our Lord in the Blessed Sacrament. It is the grace of God that has sustained me in all these years. . . .

The highlight of my priestly ministry was my 12 years and six months as an active duty Catholic chaplain in the U.S. Air Force. The greatest joy was to go back to Okinawa, Japan, and offer the Holy Sacrifice of the Mass in Chapel 2, near the office where Father Dzik died. . . . I was deployed four times formally and went on numerous airborne missions as the mobility chaplain for the Operations Group at McChord Air Force Base, an Air Mobility Command base, near Seattle, Washington. As a priest it was a joy to offer the sacraments to the faithful in the military and it was always a joy to do various activities to boost the morale of the military.

I remember in the United Arab Emirate during a hot summer in 2007, I was serving fruit smoothies to them and it was very much appreciated. I remember in Oman it was 144 degrees outside on a C-17 mission, and I bought 20 Gatorade drinks for the crew. They remembered me back in McChord as “their” chaplain. . . .

As a chaplain I did confidential counseling not just to Catholics but anyone on the base. I was a project officer for so many projects (Holocaust Memorial Luncheon, National Prayer Breakfast, MIA-POW Memorial Luncheon, etc.) I did the first community outreach activity for the humanitarian deployment in Thailand after the terrible tsunami in December of 2004, where 250,000 people died. I traveled all over the world – throughout the United States, Germany, Spain, France, Italy, Afghanistan, United Arab Emirate (UAE), Qatar, Oman, Portugal, Japan, South Korea, Thailand and Papa New Guinea. This was an education in itself.

In the military, I served under many commanders and witnessed both good and bad leadership. I want to say we have been honored to serve under some very faithful and dedicated bishops in our diocese. Bishop Daniel R. Jenky has been very supportive of me when I was in the military and he has always been approachable and amiable. He has done great things for our diocese.

Priestly ministry has not changed in its essence from a canonical, liturgical or catechetical view. On the diocesan front, we are faced with smaller populations in our rural Catholic parishes, the new technologies of communication, the agricultural changes from small farms to larger farms, fewer priests to care for the faithful, the demographic changes due to the movement of Catholics to job paying employment areas, the current non-approval of a state budget and the stress of maintaining old facilities with few or no funds. Although we were mostly trained in theology, we are now administrators and managers of large facilities such as rectories, schools and churches and many have never been formally trained in this area. Although some of our brother priests have left the ministerial priesthood by their own decision and others by their immoral actions, the holy priesthood of Jesus Christ is still very much alive and active, serving the People of God on their pilgrimage to the eternal Kingdom.

My prayer for all the faithful and the priests of our diocese, especially my fellow ordination classmates of 1991, is that we keep looking ahead to the eternal finish line as we go forward like St. Paul, to faithfully live out the Paschal Mystery in our lives. May the Lord continue to give us the grace to complete this mission. Ad multos anos.