Born in Chicago, Father Campbell holds a bachelor’s degree from Loyola University Chicago and received a law degree from the Loyola School of Law in 1982. After practicing law in central Illinois for four years as an assistant state’s attorney, he entered Mount St. Mary’s Seminary in Emmitsburg, Maryland, where he earned master’s degrees in divinity and theology. 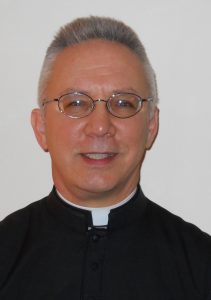 He was parochial vicar at St. Patrick in Urbana for one year before being named pastor at St. Lawrence in Penfield and Holy Trinity in Rankin, as well as chaplain at Schlarman High School in Danville. His other pastorates in the Diocese of Peoria include Sts. Peter and Paul, Nauvoo, and Sacred Heart, Dallas City, and St. Thomas, Philo, and Immaculate Conception, Bongard.

He was named associate pastor at St. John Vianney in Northlake in 2007, and St. Thomas More in Chicago in 2010.

With his ordination classmate, Father Benjamin Reese, he founded a society for diocesan priests, The Apostles of Jesus Christ, Priest and Victim. They served together at Our Lady of Mount Carmel and St. Therese of Lisieux parishes in Kenosha, Wisconsin, from 2011 until 2015, when Father Reese’s health declined.

Father Campbell continues as pastor of both parishes, and as adjunct professor of theology at Sacred Heart Seminary in Hales Corners, Wisconsin. Mail may be sent to him at Our Lady of Mount Carmel Church, 1919 65th St., Kenosha, WI 53140.

Both parishes will host a celebration for him on Sunday, May 22, at Our Lady of Mount Carmel. Another gathering with family and friends is planned for the following Sunday, May 29, in Chicago.

In grade school I served as an altar boy at St. Denis Parish on the Southwest Side of Chicago, but the thought of becoming a priest never entered my mind. It was the same throughout high school and college. I faithfully went to Sunday Mass, but I wanted to get married and have a big family.

It wasn’t until I was halfway through law school that God began to communicate His will to me about becoming a priest. My mother often read religious books and lives of the saints, and would share what she read with our family. After having read “The Dialogue of St. Catherine of Siena” by this great mystic and doctor of the church, which relates what God the Father communicated to St. Catherine, my mother gave the book to me. After reading it I recall thinking, “This is the truth, and nothing else matters.”

I had been attending daily Mass, and one day, shortly after having read this book, I was at St. Peter’s Church in downtown Chicago. The Gospel reading was Christ’s call to His disciples to follow Him, and I somehow knew that Our Lord was speaking to me personally.

I seriously considered quitting law school and entering the priesthood. My parents were supportive, and my mother said, “I thought this would happen if I gave you that book.” But I sought out an older priest for spiritual direction and he advised that I not rush my decision. . . . I completed law school and took a job in central Illinois as an assistant state’s attorney. I went to daily Mass, read Scripture and spiritual works, and prayed a lot, asking God to show me His will.

As time went on I kept thinking about the priesthood more and more, but before leaving the secular world I wanted to be sure that the Lord was calling me. Over the span of a couple of years I would periodically open the Bible, put my finger down and start reading — something I had seen my mother do when she had questions. . . . The last time I tried this, I was visiting my parents on a weekend. After everyone was asleep, I prayed, “Lord, give me just one more sign,” and I flipped open the family Bible. . . . I put my finger down and found the following words: “Then I heard the voice of the Lord saying, ‘Whom shall I send?’ Who will go for us?’ ‘Here I am,’ I said; ‘send me!’” (Isaiah 6:8). I then said, “OK, Lord, I’m yours. No more need for signs.” A few months later I was off to the seminary, and I’ve never looked back.

Who had the biggest influence on your vocation?

My mother. She was the “spiritual force” which helped to form and guide our family in the Catholic faith. My mother went to daily Mass, read books on the faith and the saints, and each evening would go off to her room and pray – the Rosary, her favorite form of prayer, which is mine as well. Over the years, and still today, whenever I or family members are in need of God’s help, we ask my mother for prayers.

I’d have to say the two greatest acts that the priest performs: offering the Holy Sacrifice of the Mass daily, and hearing confessions. For about the past dozen years I have been blessed to be able to offer the Extraordinary Form of the Mass at the parishes where I have served, and that has added another dimension to my priesthood and has helped me to offer the Ordinary Form of the Mass more reverently. There is a real beauty with the traditional Latin Mass, especially when sung with Gregorian chant.

Hearing confessions can be the most wearying of priestly duties, but it always brings tremendous satisfaction. I’m always amazed that penitents place their complete trust in me, a priest, and that they truly believe that when they confess their sins, they really confess them to Jesus Christ; that the priest absolves them by acting in the very person of Christ.

Talk about your prayer life — what feeds your ministry?

I’ve always viewed my prayer life as the foundation and source of strength for my priestly ministry. Prayer is the key to having a personal relationship with God; that goes for everyone, but especially for priests. As I tell people, if you don’t set a time each day to pray, it’s likely you won’t pray, because by the end of the day you’ll be worn out. Moreover, the devil knows that prayer keeps us close to God, and he tries to throw every obstacle before us to prevent us from praying.

Throughout the years of my priesthood I’ve tried to be faithful to a daily schedule of prayer, with the Liturgy of the Hours, the rosary, spiritual reading and meditation, and spending at least an hour before Our Lord in the Blessed Sacrament. Sometimes it’s difficult to make that time and be faithful to a daily schedule, but it’s worth the effort. I often find that when I’m tired and exhausted, God grants me the greatest consolations in prayer.

Through prayer and devotion to Our Lady I find the strength to persevere, answers to various issues and problems, and great peace of soul, knowing that God is in charge and I am just His lowly servant.

I think the Scripture passage which best sums up my priestly ministry is 2 Timothy 4:1-2, where St. Paul exhorts Timothy: “Proclaim the word; be persistent whether it is convenient or inconvenient; convince, reprimand, encourage through all patience and teaching.”

Love for the beauty of the truth of the Catholic faith, and a desire to make it better known and understood, is one of the things that motivated me to enter the priesthood. “Faith comes from hearing” (Romans 10:17), as St. Paul reminds us. For this reason I love to preach, and I look forward to the opportunity every weekend to go before my parishioners and try to lead them to a deeper encounter with Christ through reflecting on the weekly Gospel message.

I also love to teach, and in whatever parish I’ve been assigned, I have always sought out opportunities to teach. . . .

Name a profound experience of mercy, either given or received, and the impact it had on your priesthood.

A woman called from Louisiana to request that a priest visit her father who was dying in a nursing home and had been out of the church for 40 years, divorced and remarried. As I was making my way up to the room I was praying to St. Faustina. In the pocket of my clergy shirt I always carry a crucifix that I obtained in Rome years ago, which contains a relic of St. Faustina.

When I entered the room I saw that the man was unable to speak and his eyes were closed. The man’s current wife (from a civil marriage) was there and told me that on a couple of previous occasions priests had come when her husband was sick (called by the daughter who had called me) but he refused to speak with them. My heart sank a bit, because I could not in good conscience anoint him if doing so would be against his will; but then I placed the relic of St. Faustina on the man’s chest and again prayed for her intercession.

I spoke the man’s name and he was able to slightly open one eye. I asked if he were able to respond to me, and to indicate “yes” by squeezing my hand, and he responded. I asked if he would like to receive the Sacrament of Anointing of the Sick and he squeezed my hand. Then I asked if he would be willing to confess his sins and he again squeezed my hand. After asking the wife to leave the room I proceeded to ask him some questions pertaining to sins and asked whether he was sorry, which were followed by a series of hand squeezes. I then recited the Act of Contrition out loud and absolved him from his sins, after which I administered the Anointing of the Sick and bestowed upon him the apostolic blessing. After I left, in thanksgiving, I prayed the Divine Mercy Chaplet.

The next day I told his daughter what had happened, and she was overjoyed, telling me that throughout the whole of the previous day she and other family members were together praying the Divine Mercy Chaplet for her father. “Give thanks to the Lord for He is good, for His mercy endureth forever!” (Psalm 107:1)