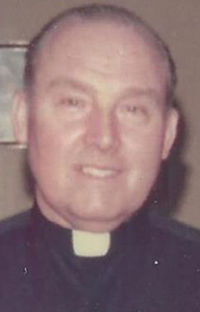 EDITOR’S NOTE: Following is the homily from the June 7 funeral Mass at St. Michael the Archangel Church in Streator for Father Richard Crawford. The homilist was Msgr. Philip Halfacre, vicar of the Ottawa Vicariate. Father Crawford died June 3, 2016, at the age of 95. His obituary is found here. Your Excellency, Monsignors and […]

“Goodbyes always make my throat hurt . . . . I need more hellos.” — Charlie Brown, from the comic strip “Peanuts” —– UTICA — Msgr. James Swaner, a Charlie Brown fan and collector, won’t have to say goodbye when he ends his 13 years as pastor of St. Mary Parish here by transitioning to […]

Born in New Jersey, Father Vitaliano grew up in Miami, Florida. He enlisted in the U.S. Air Force in 1979 to serve his country and see the world, and discovered a deep love for his Catholic faith and a priestly vocation along the way. He studied for the priesthood at Holy Apostles College and Seminary […]

Msgr. Swetland is the president of Donnelly College in Kansas City, Kansas, and also serves as professor of Leadership and Christian Ethics there. Prior to that, he was vice president for Catholic Identity and Mission and held the Archbishop Flynn Chair of Christian Ethics at Mount St. Mary’s University in Emmitsburg, Maryland. Born in Pittsburgh, […]

A native of Pennsylvania, Father Kretz attended Temple Tech Institute in Philadelphia, where he earned an associate’s degree in computers and electronics. He also holds a bachelor’s degree in marketing from Temple University. He received a master’s degree in philosophical theology from Holy Apostles Seminary in Cromwell, Connecticut. Father Kretz’s first assignments were as parochial […]

Father Keebler was born in Daytona Beach, Florida. He attended Stetson University in DeLand, Florida, and studied for the priesthood at Holy Apostles Seminary in Cromwell, Connecticut, where he earned a master’s degree in theology and a master of divinity degree. His first assignment was as parochial vicar at Immaculate Conception in Streator. He went […]