GALESBURG — Born in Bukoba, Tanzania, in East Africa, Father Deus-Dedit B. Byabato was accepted into the minor seminary in 1979. He said 200 had applied, but only 50 were selected, and of those 50, he was one of five seminarians who went on to ordination.

He was drawn to the priesthood by the happiness and holiness of his two maternal uncles, who were priests. 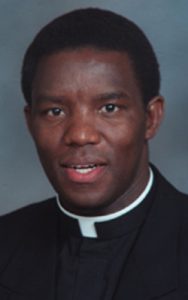 “I wanted to be like them,” Father Byabato said. “I attended the ordination of a priest from my village and that really confirmed, for me, my vocation.”

He also credits his mother as a major influence, saying her faith and prayers sustained him.

Father Byabato received a bachelor’s degree in philosophy and religious studies from Apostles of Jesus Seminary in Nairobi, Kenya. He completed his studies for the priesthood at Holy Apostles Seminary in Connecticut, where he earned a master’s of divinity degree and master’s degree in theology.

He was ordained Nov. 20, 1993, at the Cathedral of St. Patrick in Norwich, Connecticut.

LEAVE IT TO GOD

His first assignment was as parochial vicar for the Norwich cathedral parish. While working with St. Patrick’s seven nursing homes and two hospitals, he realized his call to chaplaincy.

When he transferred to the Diocese of Peoria in 1999 to join his uncle, the late Father Deo Gratias Mutefunya, and other family members, Father Byabato was assigned to be an assistant chaplain at OSF HealthCare Saint Francis Medical Center in Peoria.

After completing his clinical pastoral education in 2004, he was sent to OSF HealthCare St. Mary Medical Center in Galesburg, where he continues to serve as chaplain. In 2014, he was also named pastor of St. Aloysius in Wataga and said he considers himself “doubly blessed” to be involved in both ministries.

“The greatest joys in my priesthood have been celebrating daily Mass, administering the sacraments to the sick, and being able to draw the lost, even in their last moments, back to the Good Shepherd,” Father Byabato said. “As a chaplain it has been a blessing to be able to minister to Catholics, as well as those of other faiths.”

Another source of joy has been the ability to help seminarians in Tanzania and build four churches, a rectory and a school, thanks to the generosity of people in the United States, he said.

The greatest lesson he has learned in his first 25 years of priesthood is that prayer is very powerful. “It changes things,” according to Father Byabato.

“I have also learned that patience and flexibility are very important in the priesthood,” he said. “Staying calm is necessary. We do our best and leave the rest to Christ. After all, it is God’s Church, not mine!”

Father Byabato will celebrate a Mass of Thanksgiving on Sunday, Nov. 18, at 3 p.m. at Corpus Christi Church in Galesburg. A reception will follow in the Knights of Columbus Hall.

The celebration will continue in Africa, where he will celebrate Mass on Jan. 23, 2019, at 10 a.m. at Holy Cross Church in Kilimilile, Tanzania. All are welcome, he said.