PENFIELD — While he admired faithful priests and prayed the rosary daily, Father Michael Menner didn’t plan to be a priest.

“I tell people that I always wanted to marry a good girl and did not think much beyond that path of adventure,” he said. “I was in the business world for seven years and had a very good job, perhaps a superb job, but I was not fulfilled.”

When he took that to prayer, the Lord gave him numerous signs that pointed toward the priesthood. 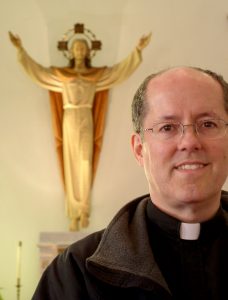 “I could dismiss any one of them as a coincidence, but so many succeeded in making me consider a vocation,” Father Menner said.

Born in Chicago, he earned a bachelor’s degree in biology from the National College of Chiropractic in Lombard in 1985. He would go on to earn a bachelor’s degree in philosophy from Our Lady of Grace Seminary in Boston in 1987 and completed his studies for the priesthood by earning a master’s of divinity degree at St. Charles Borromeo Seminary in Overbrook, Pennsylvania.

After ordination he was assigned to Sacred Heart, Moline, and would serve as parochial vicar until 1996, when he was named chaplain for the Daughters of St. Francis of Assisi in Lacon. While there, Father Menner assisted with chaplain services at King’s House in Henry. He was given pastoral care for Immaculate Conception, Lacon, in 1997.

Father Menner said the greatest influences on his vocation were his years in religious life and the Legion of Little Souls, a prayer and spirituality formation group, and its directress.

“The virtues of faith, hope and charity are really a path to God that must be a true goal sacrificially desired and practiced.”

Citing “Message of Merciful Love to Little Souls,” he said it “reminds us that God is only interested in our heartfelt love. . . . St. Thérèse, the Little Flower, was stressed by the Legion and I have been amazed at her depth of wisdom. I still have much to learn from her.”

The greatest lesson he has learned in priestly ministry to this point is that “the virtues of faith, hope and charity are really a path to God that must be a true goal sacrificially desired and practiced.”

“One of St. Thérèse’s sisters said her canonized sister should not be merely admired but imitated,” Father Menner said. “The ‘little way’ of holiness discerned by St. Thérèse is far richer than it appears and elusive to grasp due to its profound mysticism.”

He lists meditation, as well as solid friendships with priests and the laity, as a source of joy.

Father Menner will have a small celebration for family and close friends at a later date. Masses and cards are welcome, however. Mail may be sent to him at P.O. Box 49, Penfield, IL 61862.