Prior to ordination 25 years ago, God had called Fr. Thomas Gibson ‘Suddenly’

HOOPESTON — After attending vows ceremonies and ordinations for three older brothers, Father Thomas Gibson had no intention of becoming a priest. That changed “Suddenly” as he was preparing for his senior year at the University of Notre Dame.

“I worked as a stockbroker during the summers. The summer before senior year I actually landed a position in a brokerage firm after graduation,” said Father Gibson, who grew up in Oak Park as the 10th of John and Jane Gibson’s 13 children. “I was all set for professional life.” 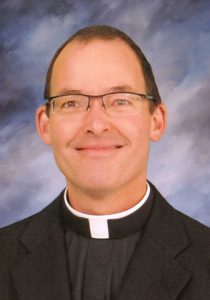 Helping out at a retirement home that summer, he remembers walking out to his car and hearing the Billy Ocean song “Suddenly.” One of the lyrics, “Suddenly, life has new meaning to me,” spoke to his heart and the idea of being a priest took hold.

“I had no idea why. I talked away the idea for a moment, but it kept coming back to me,” Father Gibson explained.

He worked with Missionaries of Charity in New York City for a year and Tijuana, Mexico for year — including two weeks with St. Mother Teresa herself. When he returned to Illinois, he applied to be a seminarian for the Diocese of Peoria on the recommendation of one of his priest brothers, who knew Msgr. Steven Rohlfs, the vocation director.

Father Gibson completed his studies for the priesthood at Mount St. Mary’s Seminary in Emmitsburg, Maryland, where he earned master’s degrees in divinity and systematic theology.

After ordination he served as parochial vicar at Holy Cross, Champaign, in 1993 and St. Thomas the Apostle, Peoria Heights, in 1994, before being named assistant chaplain at St. John’s Catholic Newman Center in Champaign in 1997. He also was parochial vicar at Sacred Heart, Moline, in 2000 and 2011.

As a pastor or administrator, Father Gibson has ministered to St. Patrick, Tolono, and St. Joseph, Ivesdale; and St. Mary, Moline, and St. Mary, East Moline. He has been the pastor at St. Anthony, Hoopeston, and part of the chaplain team at Schlarman Academy, Danville, since 2017.

With the Spanish he learned while working with the Missionaries of Charity in Mexico, he has also been involved in Hispanic ministry throughout his priesthood. That included service at St. Mary’s Cathedral, St. Bernard and Sacred Heart in Peoria. 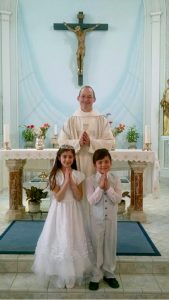 In addition, Father Gibson was granted permission to discern a vocation to religious life in 1999 and 2003.

Strong influences include his parents, who took their large family to Mass at 6:15 a.m. every morning, prayed the Liturgy of the Hours with their children every Sunday, and celebrated feast days more than birthdays.

“We had first name, middle name and confirmation name celebrations with 13 kids. That was a lot of feast days,” Father Gibson said with a laugh.

They also blessed the doorways on Epiphany, played instruments for Mass at Ascension Church on Christmas morning, and had an altar of devotion at home with everyone’s patron saint represented, along with images of the Sacred Heart of Jesus and the Immaculate Heart of Mary.

One particularly strong memory is serving Mass at a church near the Wisconsin campground where the Gibson family went for vacations. The last line of the priest’s private prayer of preparation for Communion is “Never let me be parted from you” and Father Gibson said it was the first thing he thought of when he got the idea to be a priest.

Celebrating Mass, as well as adoration of the Blessed Sacrament and devotion to the Blessed Mother, have given him great joy in his priesthood. He added that he is grateful for the support of his brother priests, who gather on a weekly basis in the Danville area.

Father Gibson said celebrating the sacrament of reconciliation “with anybody and everybody” is another memorable aspect of his ministry, especially when he can help someone who may have been away from the sacrament for many years.

The best and the greatest lesson he has learned is to meet each person where they are.

“If they’re Mexican, I’m Mexican. If they’re kids, I reach them at the kids’ level. If they have strayed — I loved to be with people who have strayed — to say, ‘I am exactly in your shoes. I know where you are,’” Father Gibson told The Catholic Post.

“Every day I wake up, I’m living on the prayers of other people. The priests depend on people praying for them. . . . And I pray for my bishop every day.”

A strong dependence on prayer — as much as three and a half hours a day — helps, as does the prayers of the people he serves.

“Every day I wake up, I’m living on the prayers of other people. The priests depend on people praying for them,” Father Gibson said. “And I pray for my bishop every day.”

Father Gibson will celebrate his anniversary with a Mass at 2 p.m. on Sunday, May 27, at St. Anthony Church in Hoopeston. A catered dinner for the parish will follow.