‘To love like Jesus loves’ is a key goal of Msgr. Mark Merdian’s 25 years of ministry

ROCK ISLAND — Msgr. Mark Merdian said it was “an interior call whereby I heard God calling me to explore service to Him as a priest” that brought him to priestly ministry.

“When I was younger, I had dreams of being a priest,” he told The Catholic Post. “I had a quiet love for the Lord and knew that serving the Lord would lead me to true happiness and help others in a greater way.” 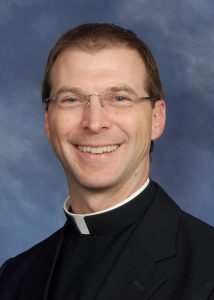 He said he also had good examples of priests from a young age.

Born in Peoria, Msgr. Merdian grew up in Chillicothe. He attended St. Edward School there and the Academy of Our Lady/Spalding Institute in Peoria, and went on to earn a bachelor’s degree in philosophy at Saint Mary’s University of Minnesota in Winona, Minnesota.

He completed his studies for the priesthood at Mount St. Mary’s Seminary in Emmitsburg, Maryland, where he earned master’s degrees in divinity and moral theology.

Msgr. Merdian’s parish assignments have included ministering as parochial vicar and pastor at St. Matthew in Champaign, and as administrator or pastor at St. Peter in Peoria from 1998 to 2001; St. Mary in Metamora and St. Elizabeth in Washburn from 2001 to 2012, adding pastoral care for St. Joseph in Roanoke and St. John in Benson in 2002. He has been pastor at St. Pius X in Rock Island and vicar of the Rock Island Vicariate since 2014.

On the diocesan level, Msgr. Merdian was administrative assistant to Bishop John J. Myers and vice chancellor from 1997 to 2001, and was appointed vicar for junior clergy in 2006 and episcopal vicar for health care in 2010.

A Knight of the Holy Sepulchre since 2003, he was named a Chaplain to His Holiness with the title of monsignor in 2009.

Msgr. Merdian was president of Peoria Notre Dame High School from 2012 to 2014.

Msgr. Merdian said his parents, family and parish priests all played a role in fostering his vocation.

“I saw my parents in prayer, striving to be faithful to the life of faith in Christ and that influenced me most. I’m sure the prayers of my mom didn’t hurt either!”

“I was blessed with a fun-loving and devout family. We were together often and there were priests and religious in my extended family,” he said. “I saw my parents in prayer, striving to be faithful to the life of faith in Christ and that influenced me most. I’m sure the prayers of my mom didn’t hurt either!” 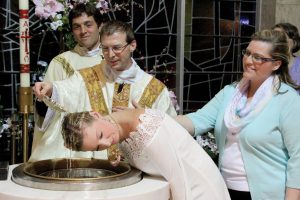 Interacting with people and bringing Christ to them in the liturgy has brought him the greatest joy.

“The Church’s liturgies are amazingly beautiful and grace-filled, especially when they are celebrated as the Church has asked,” Msgr. Merdian said. “I love celebrating the Church’s sacraments and I am filled with joy and peace when I celebrate Mass.”

Among the memorable moments he mentioned is the time he heard the confession of a fourth-grader from Latin America, who was dressed in white.

“After I finished hearing his confession, I said, ‘Go outside and say two Our Fathers for your parents.’ I meant outside of the confessional and into church,” Msgr. Merdian recalled. “You can imagine my amazement when I came out of the confessional looking for the boy and I saw his parents and motioned to them, ‘Where is he?’ They pointed outside. I looked and he was kneeling ‘outside’ saying his penance!”

When asked about the greatest lessons he has learned in his priesthood, Msgr. Merdian listed:

A Mass of Celebration is planned for 10:30 a.m. on Sunday, June 3, the Solemnity of Corpus Christi, at St. Pius X Church. There will be a gathering with family and close friends at the parish, which they are hosting.

“I will also be celebrating at Mount St. Mary’s in Emmitsburg in October at our reunion with my classmates from the seminary. I am very much looking forward to that,” Msgr. Merdian said.