WASHINGTON — When Father Stephen Willard was a second-grader at St. Thomas the Apostle School in Peoria Heights, Sister Mary Elizabeth O’Hara told him that one day he would be a priest.

His response was succinct: “No way!” 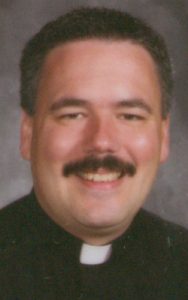 Eventually his mother, Barbara, encouraged him to speak to Father Tony Trosley, parochial vicar at St. Thomas, who put him in touch with Msgr. Steven Rohlfs, vocation director for the Diocese of Peoria. By the fall of 1985, he was enrolled at Immaculate Heart of Mary Seminary in Winona, Minnesota.

“I believed I needed to give God the first chance and eight years later, I was ordained for the Diocese of Peoria,” Father Willard said.

He received a bachelor’s degree in youth ministry with a minor in philosophy at Saint Mary’s University of Minnesota, and went on to Mount St. Mary’s Seminary in Emmitsburg, Maryland, where he earned a master’s of divinity degree and a master’s degree in church history.

After ordination, Father Willard served as parochial vicar at Holy Trinity, Bloomington, and in 1997 was named pastor at St. Mary, Downs, and chaplain at Central Catholic High School, Bloomington, with residence at St. Patrick, Bloomington. He was assigned to St. Thomas, Philo, and Immaculate Conception, Bongard, in 2003, and added pastoral care for St. Mary and St. Joseph, Pesotum, in 2004.

Father Willard was the pastor at Holy Cross, Champaign, from 2005 until 2013, when he started his current assignment as pastor of St. Patrick, Washington, and St. Monica, East Peoria.

“Celebrating the sacraments gives me the greatest joy of my priesthood,” he said. “I am blessed to celebrate Mass. I truly rejoice when people come to me and want to return to the faith after years away from the Church. I rejoice in being able to celebrate the beautiful sacrament of reconciliation with them.”

Father Willard added that Catholic education has been a wonderful part of his priesthood. He especially enjoys helping to form and guide students in their faith and said he was blessed to be a high school chaplain for six years.

The feeling is mutual. In 2016, Father Willard was honored as the Distinguished School Pastor of the Diocese of Peoria by the Office of Catholic Schools.

There have been several memorable moments over the last 25 years, including each time he got a call from the bishop transferring him to a new assignment.

“It is always bittersweet. Leaving a parish/school is difficult, but at the same time I know exciting new adventures lie ahead of me,” Father Willard said. “I know when this happens, God has a certain plan for me to serve and to use my gifts and talents. . . . I am also able to learn from the parishioners and to see the gifts and talents they bring to the parish.” 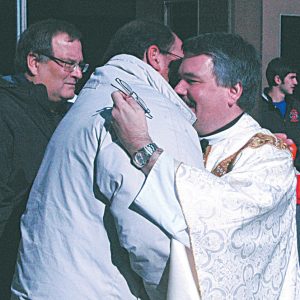 “It was amazing how our community pulled together and supported one another. I saw my parishioners in action living out their faith and being a community of ‘One Heart and One Mind.’” — Father Stephen Willard on the 2013 tornado that decimated Washington (The Catholic Post file photo/Tom Dermody)

One major moment occurred on Nov. 17, 2013, when he watched an EF4 tornado decimate Washington.

“It was amazing how our community pulled together and supported one another,” Father Willard said. “I saw my parishioners in action living out their faith and being a community of ‘One Heart and One Mind.’”

“Surrender each day to the Lord” and “be humble” are the two greatest lessons he has learned as a priest.

“I believe it is important to take each person where they are and lead them to Christ,” he added.

He will also be honored after each Mass at St. Patrick on Sunday, June 10. The gatherings will take place in the school gym.