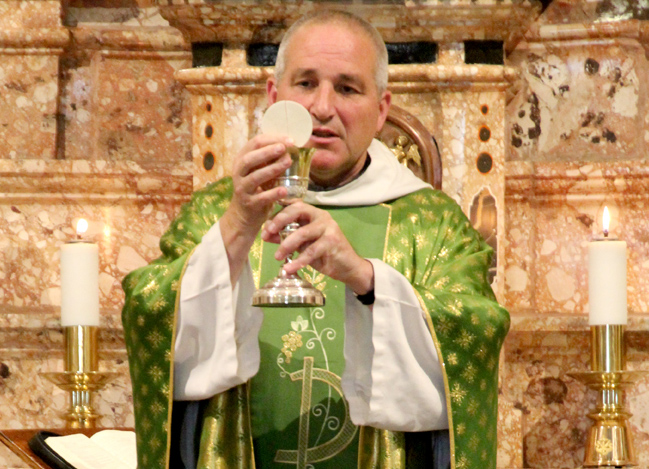 Father Joseph Mary Brown, CSJ, celebrates Mass at Padre Pio's altar in San Giovanni Rotondo in southern Italy on Oct. 25, 2015. He said "the mystery of the Holy Eucharist, that is, Jesus Himself" is what drew him to the priesthood. (Provided photo)

Ten priests serving in the Diocese of Peoria are marking their 25th anniversary of ordination this year. The first is Father Joseph Mary Brown, who was ordained for the Congregation of St. John by Bishop John J. Myers on April 26, 1997, at St. Mary’s Cathedral in Peoria.

The profiles for Father Chris Gerard Haake, Father Carl LoPresti, Father Gregory Nelson, Father Donald Roszkowski, Father Bowan Schmitt and Father David Whiteside, who were ordained May 24, 1997; Father Antonio Dittmer and Msgr. Jason Gray, who were ordained July 12, 1997; and Father John Bosco Mujuni, who was ordained Aug. 17, 1997, can be found by clicking on the links provided.

PRINCEVILLE — While his 25 years of priesthood have brought Father Joseph Mary Brown, CSJ, many moments of joy, he highlights three: celebrating Mass each, daily adoration of the Blessed Sacrament, and being able “to serve Christ’s people, day in and day out.”

That service is something the faithful have been able to count on even before Father Joseph Mary was ordained for the Congregation of St. John by Bishop John J. Myers on April 26, 1997, at St. Mary’s Cathedral in Peoria. He had been one of the chaplains at Bradley University’s Newman Center in Peoria since July 1996 and would continue that ministry after ordination.

One of the greatest lessons learned is remembering that Christ is in control — it is His Church, His sheep, and therefore He will guide His Bride to victory, to glory (with our little help) by way of the Cross.

Father Joseph Mary was named superior of the St. Joseph Novitiate in 2002, and has been prior to the Brothers of St. John at St. Joseph Priory in Princeville since 2019.

The son of James and Mary Brown, Father Joseph Mary was born on Nov. 23, 1961, in Bardstown, Kentucky. He attended Bellarmine College for two years and went on to earn a bachelor’s degree in philosophy from Christendom College, Front Royal, Virginia.

He entered the novitiate of the Congregation of St. John in Laredo, Texas, on Feb. 6, 1991, and completed his studies for the priesthood in St. Jodard and Rimont, France. Father Joseph Mary professed final vows on July 16, 1995, and was ordained a transitional deacon at the congregation’s motherhouse in Rimont on July 7, 1996.

I first discerned a call to the priesthood and religious life when I was around 18 years of age. The “call” became more distinct little by little as I gradually read the lives of the saints, spiritual books, the history of monasticism, and also by beginning to attend daily Mass and making a daily Holy Hour (thanks to the encouragement of Archbishop Fulton Sheen’s call to make a daily Holy Hour). Slowly the thought developed more and more that I, too, might be called to monastic life and to the priesthood. And thus, in the end, what drew me to the priesthood? It was, above all, the mystery of the Holy Eucharist, that is, Jesus Himself.

I cannot point my finger to one particular individual who had a decisive influence on my vocation. In fact, there were and still are innumerable positive influences on my vocation. As with all good things, the call first of all matured within my family where the Catholic faith was/is lived in a simple but fervent manner. In addition, parish priests, monks (particularly Thomas Merton’s “Seven Storey Mountain”), friends, educators and others helped me on my way to being “conformed to Christ” as His priest.

Two of the more memorable moments (among many!) in 25 years of priesthood have been concelebrating (Mass) with St. John Paul II in his private chapel during the Jubilee Year 2000, and offering Mass on the tomb of Christ in Jerusalem’s Church of the Holy Sepulcher.

One of the greatest lessons learned is remembering that Christ is in control — it is His Church, His sheep, and therefore He will guide His Bride to victory, to glory (with our little help) by way of the Cross. This frees a priest from unnecessary worries and anxieties about the state of the Church, and whether he is making a difference or not! The priest simply needs to keep his eyes continually on Christ, and let Christ do His work through the priest.

One of my favorite passages is from John 6:53 where Jesus declares, “Amen, amen, I say to you, unless you eat the flesh of the Son of Man and drink his blood, you have no life in you.” This highlights so well the fact that Jesus is our food and drink, our true life, and that without Him we cannot be truly alive.