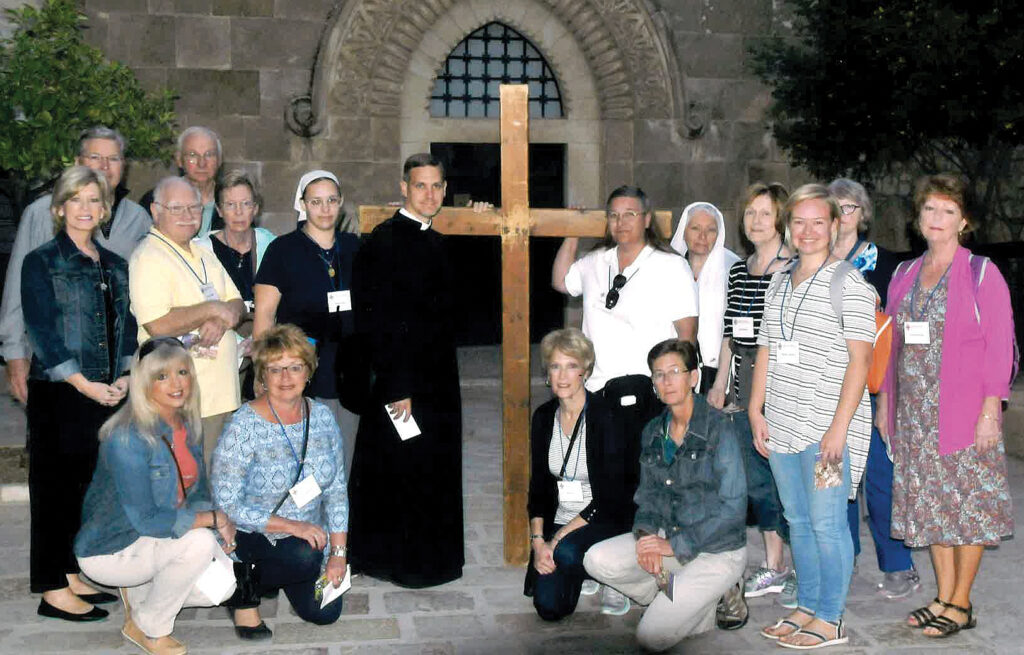 Father David Whiteside said leading pilgrimages has been a big part of his priesthood. Here he is ona pilgrimate to Israel in 2012. (Provided photo)

HAVANA — Growing up in a Catholic home and attending St. Philomena School in Peoria, Father David Whiteside said he thought about priesthood occasionally. But when he attended Emmaus Days for the first time, “the Lord revealed himself to me most powerfully.”

“I could feel the love of God and the presence of God so overpoweringly that it was undeniable,” he said. “My soul and life were transformed.”

The son of Frederick and Claralene Whiteside, Father Whiteside was born in Peoria on May 31, 1971. He went to the seminary after graduating from Peoria Notre Dame High School, and earned a bachelor’s degree in philosophy at Immaculate Heart of Mary Seminary in Winona, Minnesota.

He completed his studies for the priesthood at St. Charles Borromeo Seminary in Wynnewood, Pennsylvania, receiving master’s degrees in divinity and theology.

While continuing as the spiritual leader of the Havana and Manito faith communities, he added pastoral care for St. Mary, Lewistown, in 2017.

Father Whiteside will celebrate on Sunday, June 5, with a Holy Hour at 3 p.m. at Immaculate Conception Church in Manito. An open house will follow in the parish hall from 4 to 6 p.m. Everyone is invited to return to the church at 6 p.m. for a concert by pianist Eric Genuis. A dessert reception is planned afterward.

Growing up in a Catholic home and in a Catholic school (St. Philomena Parish in Peoria), I thought about the priesthood from time to time. I remember in second grade all of us students had to (act out) what we wanted to do when we grew up. I stood in front of the class and made the Sign of the Cross and then stood there with my hands folded in a prayer position. It was that year that I made my First Holy Communion and that my brother Jim tragically died. He was only 10 and it had a huge impact on me. I remember becoming very serious and the reality of God and eternal life was deeply impressed upon me. Six years later when I was in eighth grade and made my confirmation my sister Julie tragically died and I underwent the same experience.

In God’s providence the Emmaus Days retreat that changed my life was focused on Our Lady, the rosary and her various apparitions. I firmly believe that my vocation was born through the instrumentality of our Blessed Mother and her Divine spouse the Holy Spirit on that retreat.

It was just a couple years after that, that I attended Emmaus Days for the first time. During those three days the Lord revealed himself to me most powerfully. I could feel the love of God and the presence of God so overpoweringly that it was undeniable. My soul and life were transformed. It was there that I saw young priests and seminarians for the first time and a deep desire to give my life to the Lord was placed into my heart. I fell in love with the priesthood there and it continued to grow after I left and never departed from me. After the retreat I began praying the rosary every day and that led me to attending Mass every day, and that led me to adoration of the Blessed Sacrament, all of which nurtured my desires and my vocation.

The presence of God that enveloped me during the Emmaus Days retreat did not leave me but stayed with me for years to greater or lesser degrees and kept me focused on this new journey with God that I had discovered. As a result, I ended up joining the seminary after graduating from high school. And eight years later I was ordained.

My father influenced my vocation. He has always had a deep faith and desired to impress this faith upon me and my brothers and sisters. Periodically growing up I remember my dad asking me to consider the priesthood. Typically, I would roll my eyes a bit and say “No, I don’t think so” even though secretly in my heart I did think about it sometimes. I believe that our Blessed Mother had the biggest impact on my vocation. My father taught me how to pray the rosary when I was very young and even though I did not pray it often (prior to Emmaus Days) I had a deep sense that it was very important.

My father gave me a little book on Fatima that I read the year before I attended Emmaus Days which impressed me greatly. Then, in God’s providence the Emmaus Days retreat that changed my life was focused on Our Lady, the rosary and her various apparitions. I firmly believe that my vocation was born through the instrumentality of our Blessed Mother and her Divine spouse the Holy Spirit on that retreat.

Of course there have also been a number of good priests that influenced my vocation, especially my spiritual directors during my seminary years.

Lastly I need to say that the priests and brothers of the Community of St. John in our diocese had a big impact on my vocation. I have spent many retreats with them over the years both before and after my ordination and it is there that I learned to pray more deeply and grew in a deeper union with God.

First and foremost, Jesus in the Eucharist has given me the most joy in my priesthood. There is a certain joy that I feel in the celebration of Mass that is unique both in preaching and at the consecration of the bread and wine. . . . It is a sense of humbling privilege, that God is doing something great through an imperfect sinner like me.

First and foremost, Jesus in the Eucharist has given me the most joy in my priesthood. There is a certain joy that I feel in the celebration of Mass that is unique both in preaching and at the consecration of the bread and wine. I suspect this is true for most priests. It is a feeling of connection, a sense that this is why I was born into this world. It is a sense of humbling privilege, that God is doing something great through an imperfect sinner like me. It is a joy to witness hearts and lives being touched by God. I experience this not only in the course of the sacred liturgy, but also in one-on-one conversations, counseling and spiritual direction. I have also experienced a lot of joy when I have led groups on pilgrimage to various holy sites around the world.

There have been so many memorable moments in my priesthood that it is difficult to narrow it down. I have witnessed true healing miracles in the lives of people. I have watched people pass from this world to the next with a look of heaven on their face. I renewed my parents’ vows at their 50th wedding anniversary. I witnessed the dedication of our new church in Manito. I have celebrated Masses that logistically and humorousIy went wrong. I got to distribute Holy Communion with St. Pope John Paul II at St. Peter’s Square on New Year’s Day 2001. I celebrated the solemn daily Mass in the tomb of our Lord in Jerusalem, as well as celebrated Mass at many other holy sites in Israel. I even sang on stage with Kathy Troccoli (a Catholic Christian contemporary singer) at a youth concert.

These are bigger memories but I also treasure the thousands of little day-to-day memories that come with pastoral ministry and how so many people have touched my life over the years. It is because of my priesthood that I have met so many amazing people and am grateful to be able to call them my friends.

I have learned many lessons as a priest. Here are a few: 1) I do not have to save the world. Jesus already did that. 2) Keep things simple. 3) Little things matter. 4) People know if you love them. 5) It’s not about me, it’s about Him. 6) Daily adoration and rosary make ministry more fruitful. 7) Put your trust in God alone.

Matthew 6:25-34. I guess because I tend to be a worrywart. This passage has always spoken to me as the key to inner peace and fruitfulness of life (total surrender and dependence on God).