Fr. Haake seeks to offer ‘meaningful fatherhood’ through his priesthood 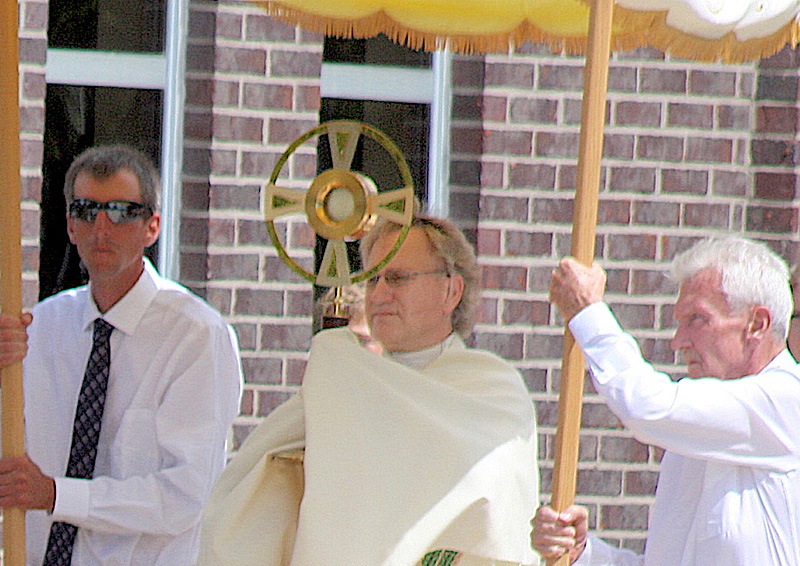 Father Christopher Haake leads a eucharistic procession around St. Patrick Church in Dwight. One of the greatest lessons he has learned over the last 25 years is to be faithful to daily prayer and eucharistic adoration. (Provided photo)

DWIGHT — Father Chris Haake started thinking about the priesthood when he was 6. His pastor at St. John the Apostle in Woodhull, Father Arnold Klauer, was a friend of the family and planted a seed from which his vocation would grow over time.

The son of James and Bernice Haake, Father Haake was born Feb. 8, 1968, in Highland. He earned a bachelor’s degree in electronics management from Southern Illinois University in Carbondale, and worked at IBM in St. Louis before entering the seminary. He studied theology at Mount Mary’s Seminary in Emmitsburg, Maryland, earning a master’s degree in divinity.

In addition, his ministry has included work as an assistant chaplain or chaplain at Notre Dame High School, Peoria, and Marquette High School, Ottawa, as well as spiritual director of the Cursillo/TEC program, and associate director of vocations.

Father Haake will celebrate with Masses of Thanksgiving at St. Patrick Church in Dwight and at his home parish of St. John the Apostle in Woodhull, followed by dinners for those with reservations.

It was a process that began at an early age, approximately 6 years old. Father Arnold Klauer — God rest his soul — was pastor of St. John the Apostle Catholic Congregation in Woodhull. He and I (through my parents) became very close. In fact (unable to do such these days) I would ride on his motorcycle (along with other family friends) to Hayward, Wisconsin, each summer on vacation; I once flew out to San Francisco and rode back with him (in his car) to Illinois. His pastorship to us and his friendship with us planted the seed of the vocation to the priesthood within me. It is important for families to invite their priests over for dinner, regularly, to form a friendship with all of them. I am so grateful to the parishioners over the past 25 years who invited me over, thus building a deeper friendship, or shall we say discipleship?

Psalm 100 summarizes for me how to live every day: pray, serve, know, submit, give thanks, and give praise to God; be joyful. He is good, merciful, and faithful.

I believe it was after I began to minister as an altar server that I would “play Mass” in the living room with my sister Colleen as my altar server.

During my adolescence and high school years, parishioners would ask me about being a priest: especially in high school this did not seem probable, but it would pop up in my thoughts every so often and I am very glad they would ask. It is so important for parishioners to help plant seeds in the youth of the parish about vocations, especially the priesthood and consecrated life.

While working for IBM St. Louis following graduation from Southern Illinois University . . . I began to take my spiritual life more seriously, including my prayer life. Praying, not just saying, the Holy Rosary became, and has remained, a very important part of my daily life, and thus the Blessed Virgin Mary herself. Around the same time Father Lambert Reilly (later Archabbot) was an interim pastor of St. John Parish. Although I did not know the term he became my spiritual director, and friend.

How did you realize you were being called?

In the summer of 1992 Father Lambert invited me to attend Emmaus Days — I only went because he invited me. In fact, on the way from Collinsville, where I lived at the time, I nearly turned back several times, but because Father asked, I was steadfast. I am so grateful for Emmaus Days: I pray that every young man attends at least once in his life.

Sitting at breakfast either Sunday or Monday of Emmaus Days, Deacon (now Father) Gary Caster said that God told him I was called to be his priest; I only took him somewhat seriously, but that statement resonated in my thought and prayer.

Two days following Emmaus Days, after discussing it with my parents, I called Msgr. Steven Rohlfs, who was the vocation director, and asked to join the seminary program.

It was near the end of Second Theology when Father Lou Kennedy, my spiritual director, God rest his soul, told me to let him know if I was planning on getting ordained. After inquiring with some of his other directees who were my friends, I found out I was the only one in Second Theology he asked this question. By the end of the spring semester, I told him I was planning on being ordained. It truly was the Holy Spirit guiding him as Third Theology was a very difficult time, mostly due to poor health, and it is likely that if I had not made the commitment, I would have left seminary formation.

This list would certainly include Father Arnold Klauer, Abbot Lambert Reilly, parishioners of my home parish, and without a doubt, my parents. During my seminary formation the list would expand to include the staff of Mount Saint Mary’s Seminary, the priests with whom I ministered at parishes; my home pastors Father Benjamin Reese and Father Bruce Lopez, may God rest their souls, who were very good to me and holy witnesses of priesthood.

Pop, my father, had been a great influence by his witness, especially in one particular area: Sometimes he would work “7/14s” — seven days a week and up to 14 hours a day — yet he never missed Sunday or Holy Day of Obligation Masses! This resonated loudly in my life, even in college, which was several hours from home. I never missed Sunday or Holy Day of Obligation Masses and neither did my close Catholic friends at SIUC. We would either go to Mass together or meet at church or the Newman Center, and afterward we would often get or make brunch. This impacted my preparation for my vocation.

Relationships formed within the many and varied ministries I have been a part of have influenced my desire to grow in spiritual fatherhood as a priest of Jesus Christ.

Priestly fraternity from within and from without the Diocese of Peoria, leading to a greater joy of celebrating the sacraments with and for parishioners, including those in other ministries such as Catholic high school, TEC, Cursillo, etc.; entering in the joys and sorrows of their lives with a more meaningful fatherhood via priesthood. Besides celebrating the Mass/Eucharist, I most enjoy the celebration of baptism and reconciliation.

My first Mass in a nursing home was shortly after ordination and prior to my first assignment. My maternal grandfather was a resident there, and he’d been unable to come for my ordination and Mass of Thanksgiving. He was also the first relative for whom I celebrated a Mass of Christian Burial, which was just one week prior to the first wedding over which I presided. It was for my sister Colleen, who married Arthur Cajigal; the second was for a friend I made at SIUC.

I also count as “Memorable Moments” the realization of the “holy glow” of holy people as they prepare to meet God face to face when the final sacraments are received.

To rely not on my own strengths, gifts, abilities, thoughts, etc., but on grace! God works through these capacities, but I must allow Him to enter into and work through them. I have to allow His grace to begin, continue, and conclude everything. I know that I need to be faithful to daily prayer (both Liturgy of the Hours and personal — vocal and mental) and Eucharistic Adoration.

Psalm 100. It is prayed on the first and third Fridays during Morning Prayer from the Liturgy of the Hours; it may also be prayed as the Invitatory to open the Liturgy of the Hours. It summarizes for me how to live every day: pray, serve, know, submit, give thanks, and give praise to God; be joyful. He is good, merciful, and faithful.