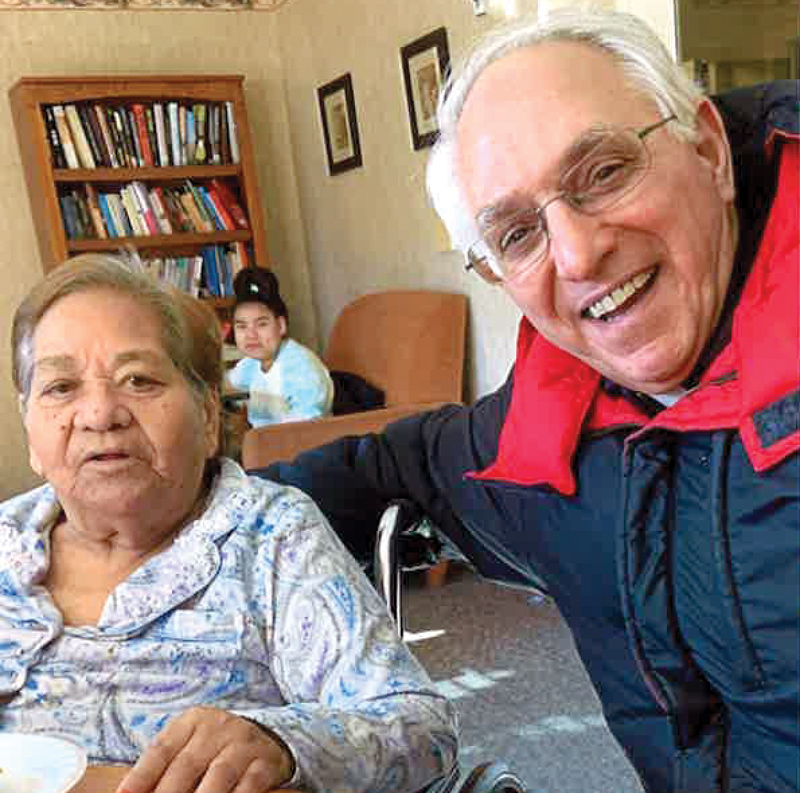 Father Carl LoPresti poses with octogenarian Maria Palafox, now deceased, who touched his soul with her love and joy of life. He called her "Mamasita di mi corazon" or "little sweet mother of my heart." (Provided photo)

FAIRBURY — Observing the power and effect of the sacraments has been the biggest influence on Father Carl LoPresti, especially those he administered to the elderly, sick and dying over the course of his priesthood.

“These privileged experiences are also among my most memorable, and grateful moments,” he said.

Father LoPresti was born in Indiana, Pennsylvania, on April 8, 1944, the son of Angelo and Frances LoPresti. He earned a bachelor’s degree in German and history from the College of Wooster in Ohio and a law degree from Washington University in St. Louis.

He would serve as a federal prosecutor, private practice attorney, and trial attorney for the U.S. Department of Justice antitrust division, before entering St. Charles Borromeo Seminary in Wynnewood, Pennsylvania, to study for the priesthood.

The greatest lesson learned in 25 years of priesthood is persevering patience with others, self, and with our Lord himself. Divine grace operates on our Lord’s schedule, not ours.

After his ordination, Father LoPresti served as parochial vicar at Immaculate Conception in Monmouth, St. Andrew in Oquawka, and St. Patrick in Raritan. He was appointed pastor of St. Joseph in Chenoa and St. Mary in Lexington in 1999, and added pastoral care for St. Joseph in Colfax in 2001. He was granted senior status in 2018.

Father LoPresti will celebrate his anniversary with a Mass of Thanksgiving for friends at his home.

“In lieu of cards, I would be most grateful for prayers of my parishioners and many non-Catholic friends, all of whom I was privileged to serve over the past 25 years,” he said. “I will, of course, gratefully include their intentions in my Mass of Thanksgiving to the Lord for the gift of priesthood.”

Other priests by their example drew me to the priesthood, and it was through my long friendship with them and their encouragement to pursue priesthood that I knew our Lord was calling me. These outstanding priests included Father Martin McCabe, OFM Cap., Father Thomas Aquinas Dieutkiewcz, OFM Cap., Father Matthew Robinson, OP, and Father Santos Mendoza, all of whom have now gone to God with my profound gratitude for their friendship and example.

In addition to ministering to the elderly, sick and dying, Father LoPresti recalled a retreat he attended shortly after his ordination. The speaker was Bishop Myers, who spoke about the many aspects of priesthood based on his own lived experience of it. “At the end of his prepared remarks, he closed his file, leaned forward into the podium, looking directly at us, paused, and then said, ‘Gentlemen, (priesthood) boils down to this: “Learn to love your people — even the stinkers!’ We chuckled, of course, but it was sage advice which has served me well and is as fresh in my mind today as it was 25 years ago, and will remain in my memory and guide me until our Lord calls me home.”

The greatest lesson learned in 25 years of priesthood is persevering patience with others, self, and with our Lord himself. Divine grace operates on our Lord’s schedule, not ours.

Luke 18:13. It explains for me in a single verse the entire purpose and meaning inhering in the Incarnation, public ministry, suffering, death and resurrection of our Lord. It sums up for me the essence and purpose of our Christian faith and the priesthood itself, and affirms that the fruit of God’s love for us is his unfailing Divine mercy, which St. John Paul II has described as “the Easter gift Christ gave to the church.”