Community important for Fr. Roszkowski, who needs and wants to be a companion 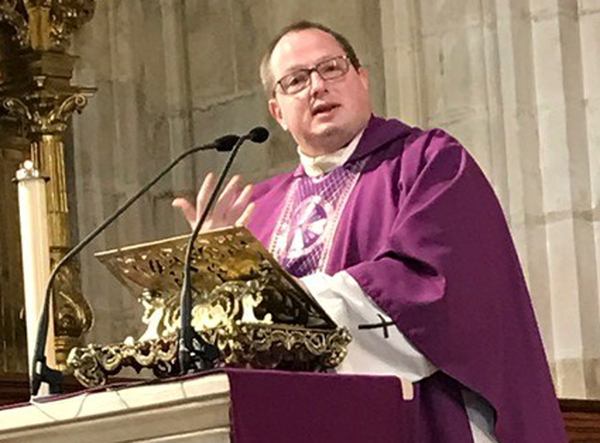 Father Don Roszkowski said he finds joy in those moments that God uses him, such as when he's preaching "and all of a suddenn you can just feel the Holy Spirit." (Provided photo)

When Father Donald Roszkowski needs inspiration, he looks to Luke 5:17-39, the story of the paralytic man who was lowered through a hole in the roof by four friends so he could see Jesus.

“All of us are broken in some way, somehow,” he said. “I can really feel my brokenness and the things that hurt, but there’s also this idea of the four friends. They went out of their way to help him, to lower him. I want friends like that, and I need to be a friend like that.”

Father Roszkowski said he knows he has benefited from the companionship of family, friends and priests since his early days as the youngest of John and Mary Roszkowski’s five sons in Northlake. He points to how moved he was when people reached out to his brother, John, when he was diagnosed with leukemia at 8 years old and eventually died.

“I wanted to dedicate the rest of my life to serving others, helping others,” he told The Catholic Post.

Father Roszkowski attended Holy Apostles College and Seminary in Cromwell, Connecticut, to study philosophy. He completed his studies for the priesthood at Mount St. Mary Seminary in Emmitsburg, Maryland, where he earned his master of divinity degree.

He was administrator at St. Ann in Peoria from 2016 until being named assistant chaplain at OSF HealthCare Saint Francis Medical Center, Peoria, in 2020. Father Roszkowski will add pastoral care to The Sisters of the Third Order of St. Francis in East Peoria when he becomes their chaplain on June 15.

In addition, his ministry has included work as assistant chaplain at St. John’s Catholic Newman Center in Champaign, and as associate director of vocations for the Diocese of Peoria.

“He was such a gentle man,” Father Roszkowski said. “I remember him playing with us and making silly faces. But when my brother was going through his illness he took so much time just to listen to me, to hear me. When I told him I was going to the seminary he was just so delighted. I got to preach his funeral Mass.”

More recent influences are Father Dave Pivonka, TOR, president of Franciscan University of Steubenville — “He moves my heart” — and Auxiliary Bishop Robert Barron of Los Angeles — “He moves my intellect.”

“A number of places I’ve been I’ve done what I call ‘Vianney Days,’ where I spend 12 hours in the confessional, from 9 a.m. to 9 p.m. I feel very blessed and so excited about how well-received that was and the tremendous conversions because I made it available. I can’t say I’m a John Vianney in the confessional, but I try,” Father Roszkowski said.

“Another great joy was when I had a school. I would love going over to be with the kids, especially those days when you’re feeling stressed or maybe a little down,” Father Roszkowski said. “There’s nothing like the kids to lift your spirit. There’s nothing quicker, faster or more lovely than a child smiling at you and wanting to be with you.”

He added that it brings joy to his heart when he hears what his brother priests are able to accomplish.

One of many is when he took his parents to Pope John Paul II’s private chapel at the Vatican for Mass and exchanged zucchettos with him. The pope called him a “baby priest” because Father Roszkowski had just been ordained and thanked John and Mary Roszkowski for giving their son to the church.

He has also celebrated Mass at St. John Vianney’s tomb in Ars, France; at the exact spot where St. Francis died in Assisi, Italy; and at Fatima, Portugal, and Lourdes, France.

“While those are all very extraordinarily profound moments, sometimes saying Mass at somebody’s house with the family around the table, kneeling and receiving, it’s just as profound as the other experiences,” Father Roszkowski said.

“Blossom where you’re planted,” he said. “No matter what assignment you’re at, dive in and live that ministry.”

Father Roszkowski said you often hear “God loves you,” but he feels called by God to help people understand and accept that this is true.

And community is not a word he uses lightly.

“Community is so important. I’m not walking this journey alone,” he said. “I’ve got my brother priests, I’ve got my family, and I’ve got friends that I need to walk with.”

Luke 5:17-39, the story of the paralytic who is lowered by four friends through the roof of a house where Jesus is.