Fr. Nelson: Goal must be helping others grow in faith, encounter the Lord 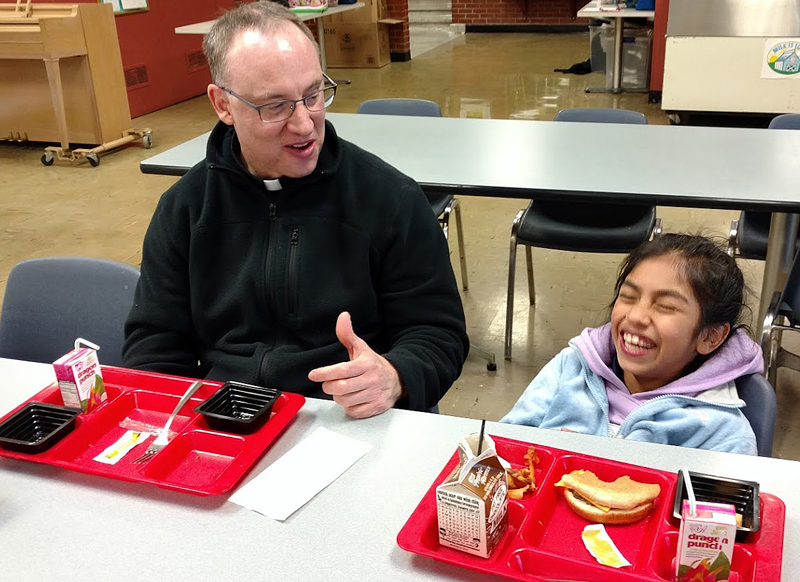 Father Greg Nelson, pastor of St. Mary Parish and School in Bloomington, shows that school lunches can be fun with the right companion. Provided photo

BLOOMINGTON — Father Greg Nelson was interested in many types of work, but realized he was only going to be happy if he served God as a priest.

The son of Carl E. and Cheryl G. Nelson, he was born in Peoria on Oct. 25, 1967. Father Nelson earned a bachelor’s degree in marketing from DePaul University in Chicago and stayed in the Windy City to work as a research analyst. Heeding the Lord’s call, he went to St. Charles Borromeo Seminary in Wynnewood, Pennsylvania, where he earned a master of divinity degree.

After ordination, he served as parochial vicar at Holy Trinity, Bloomington, and then as pastor at St. Philomena, Monticello, and St. Michael Bement for four years. He was appointed to lead St. Paul in Danville in 2005 and was named vicar of the Danville Vicariate in 2013.

Father Nelson has been the pastor at St. Mary in Bloomington since 2016. He plans to celebrate one of the Sunday Masses there this month as a Mass of Thanksgiving.

I realized that, regardless of the many other life avenues I was attracted to, a vocation as a priest would make me the happiest. I also realized I was being called after devoting more time to prayer and daily Mass, and serving as a sponsor in my parish RCIA program in Chicago.

My biggest influence has been the good example of my parents’ and extended family’s faith, as well as the witness of several faithful pastors and chaplains I encountered while growing up.

Preaching has always been a labor of love, as well as friendships with parishioners’ families and my brother priests, especially in my support group, Jesus Caritas.

I have learned that the greatest accomplishments in the priesthood are always connected with helping others grow in their faith and encounter the Lord, and that everything I am and do somehow has to be directed toward that goal.

I will always treasure my trip to Rome and Assisi, and having the privilege of saying Mass right next to the tomb of St. Peter. It was also a thrill to see the church our great-uncle built in Croatia. Being on a diocesan retreat with Lorenzo Albacete opened me to a way of looking at the faith that in many ways revitalized my priesthood from that point on.

I have learned that the greatest accomplishments in the priesthood are always connected with helping others grow in their faith and encounter the Lord, and that everything I am and do somehow has to be directed toward that goal. I have also learned that kindness will always speak to others much more than any other way of handling a situation.

Luke 24:13-35 (Walk to Emmaus). It says everything about Christ’s presence in the Mass, and that he is accompanying us in so many ways throughout our lives, seen or unseen.