Msgr. Gray: Always have the courage to preach Gospel truth, no matter what 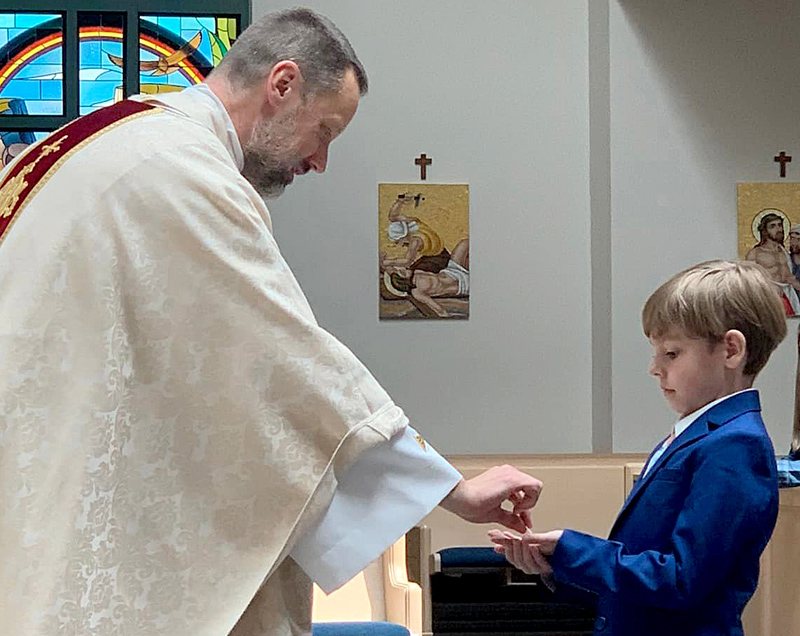 Bringing the sacraments to people -- especially those who are dying -- have been rewarding moments for Msgr. Jason Gray, pastor of St. Thomas the Apostle Parish in Peoria Heights. (Provided photo)

PEORIA HEIGHTS — It was attending Emmaus Days, a vocations awareness program sponsored by the Diocese of Peoria, that drew Msgr. Jason Gray to the priesthood.

“This retreat was important in helping me realize that praying, ‘Thy will be done’ in the Our Father really means that I should want to do God’s will over my own,” he said.

The most important thing for a priest is the opportunity to bring the Gospel to those in need. Hearing confessions and bringing the sacraments to the dying are always rewarding moments. . . .

His path to the priesthood started in Silvis on July 8, 1971. He earned bachelor’s degrees in philosophy and mathematics from St. Mary’s College and Immaculate Heart of Mary Seminary in Winona, Minnesota, and went on to study for a licentiate in sacred theology at the Pontifical North American College in Rome.

He was ordained on July 12, 1997, by Bishop John J. Myers at St. Mary’s Cathedral in Peoria, along with Father Antonio Dittmer.

Msgr. Gray also attended The Catholic University of America and earned a licentiate in canon law in 2006.

He has served as parochial vicar at St. Columba in Ottawa, and administrator and pastor at St. Vincent de Paul in Peoria. On the diocesan level, he has been vice chancellor, administrative assistant to Bishop John J. Myers, and judicial vicar, adjutant judicial vicar, and judge in the Marriage Tribunal.

He was named a Chaplain to His Holiness with the title of monsignor in 2009.

In addition, Msgr. Gray was released to work in the Congregation of the Causes of Saints in Rome for three years. While there, he studied for a doctorate in canon law, which he received in 2015.

He currently serves as pastor of St. Thomas the Apostle Parish in Peoria Heights, as well as episcopal vicar for consecrated life and judicial vicar of the Diocese of Peoria.

In celebration of his 25th anniversary, a reception will be held after each Mass the weekend of July 9-10 at St. Thomas the Apostle Church. The public is welcome.

The spirituality of St. Thérèse of Lisieux has been very inspiring to me, especially the example of the simplicity of her little way and her humility.

The most important thing for a priest is the opportunity to bring the Gospel to those in need. Hearing confessions and bringing the sacraments to the dying are always rewarding moments for me as a priest.

I enjoyed working on a license in Sacred Scripture in seminary, and then after ordination going back for a license in canon law. This study of canon law opened the door to participate in the canonical study of the miracle attributed to Archbishop Sheen and later to working in the Congregation of the Causes of Saints.

First: We must always have the courage to preach the truth of the Gospel, especially when it is inconvenient.

Second: At one time, I assumed that the sacrifice of celibacy makes the priesthood a more difficult vocation than marriage. After preparing couples for marriage and seeing the sacrifices necessary on the part of spouses who submit their wills to each other, I thought the relative freedom that a priest enjoys makes the priesthood as a less difficult vocation than marriage. Over time, I see that every vocation is a call to give of ourselves, to spend ourselves in love whether for one’s parishioners or for one’s spouse and family.