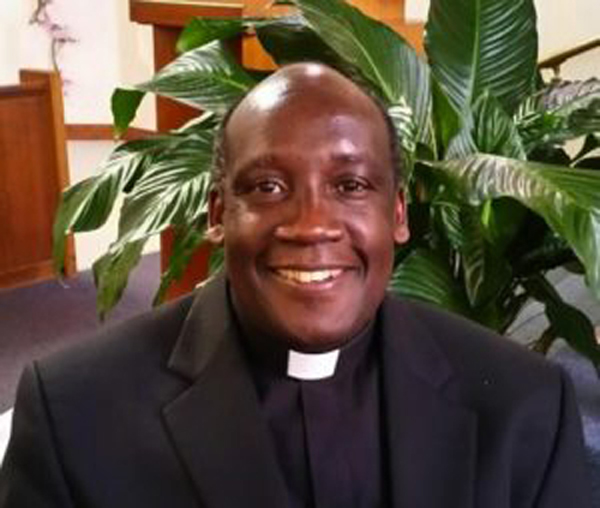 LACON — When he was 8, Father John Bosco Mujuni became an altar server. While he was at Mass one day, his father pointed to the priests and said, “I would like you to be like these priests.”

“The wish of my father and my active involvement as an altar boy and being involved in Catholic associations for the youth inspired me to apply and join a high school seminary,” Father John Bosco recalled. “I kept on discerning a vocation to priesthood, later on joined the college seminary, and finally made a decision to be a priest.”

Born Jan. 6, 1968, in Ishaka-Bushenyi Municipality in Uganda, Father John Bosco attended St. Francis Xavier-Kitabi Seminary in Bushenyi, the high school seminary located in his home parish. He went on to St. Thomas Aquinas-Katigondo National Major Seminary in Masaka, Uganda, where he earned a diploma in philosophical and religious studies, as well as a bachelor’s degree in philosophy from Makerere University.

Wherever I have been assigned in my almost 25 years of priesthood, the Christians have loved me, supported me, prayed for me and encouraged me tremendously.

He completed his studies for the priesthood at St. Mary’s National Major Seminary Ggaba in Kampala, Uganda, where he obtained a diploma in theological and pastoral studies, and a bachelor’s degree in divinity.

As he was completing his doctoral studies in 2016, he had a desire to serve in an American parish before returning home in order to get “a taste and experience of pastoral ministry among different people and in a different country.” One of the priests from Uganda who was serving in the Diocese of Peoria suggested he apply to Bishop Daniel R. Jenky, CSC.

Father John Bosco was accepted and has ministered as a parochial vicar at St. Patrick, Andalusia, and St. Ambrose, Milan, and has been administrator and pastor of Immaculate Conception, Lacon, and St. John XXIII, Henry, since 2017. In addition, he has been chaplain at St. Joseph’s Nursing Home, Lacon.

A celebration with the Lacon and Henry faith communities will likely be held in August, near his anniversary date of Aug. 17, and details are still being determined. His home parish in Uganda is planning a Mass of Thanksgiving in early 2023.

I trace my vocation to priesthood to my family. My father (now deceased) and my mother (still living and 91 years young!) were devout Catholics. As a family we had daily morning and evening prayers, and attended Sunday Mass regularly unless one was sick. After my First Holy Communion at the age of 8 years I joined the group of altar servers, and was involved in Catholic associations for the youth. One day when I was in church, my father pointed to the priests who were presiding at Mass on Sunday, and said to me, “I would like you to be like these priests.” My father died when I was 10 years old, so he did not live to see me join the seminary. The wish of my father and my active involvement as an altar boy and being involved in Catholic associations for the youth inspired me to apply and join a high school seminary which was about eight miles from my home. At the high school seminary I kept discerning a vocation to priesthood, later on joined the college seminary and finally made a decision to be a priest.

Secondly it is the people whom I serve as a priest. Wherever I have been assigned in my almost 25 years of priesthood, the Christians have loved me, supported me, prayed for me and encouraged me tremendously.

Thirdly some of my fellow priests who are friends or group mates and some that I have worked with have supported me a lot in my vocation. This has been through their sharing of their experience and wise counsel when faced with some challenges or hard decisions to make.

Every time I celebrate Mass and look at people whom I know and those I don’t know listening to me speaking and preaching and gazing at Jesus in the Eucharist as I hold Him in hands, humbles me and sometimes I question myself: “Who am I to be before these people!” This gives me the joy of priesthood and I realize that in my unworthiness, and sometimes in my being different physically, by race, by accent and so on, God unites us in the eucharistic celebration.

My memorable moments have always been triggered by the Scripture verse I selected and put on my priestly souvenir on the day of my ordination: “Remember that I have commanded you to be determined and confident! Don’t be afraid or discouraged for I, the Lord your God am with you wherever you go” (Joshua 1:9). Sometimes in remembering the uphill of being raised in a poor family, losing a father when I was still a child, facing the challenges of the cold winter for the first time, sometimes being far away from my family and old-time friends, brings some memories. However this text of Joshua 1:9, gives me good memories of my ordination day and comforts me and helps to reflect back and realize how God has been indeed with me wherever I have been.

My greatest lesson is that I have realized the need to be flexible and accept where God leads you and be happy with the assignment that you are given.

My greatest lesson is that I have realized the need to be flexible and accept where God leads you and be happy with the assignment that you are given. This is because in my first assignment as a priest, I never wished to be appointed in an academic institution to teach. I wanted to serve in a parish and rest from academics after 14 years of seminary formation. To my surprise the first appointment was to teach in a junior high school seminary.

Now I am doing pastoral ministry in two parishes, the first thing I desired, and I am happy with it. I am even finding it joyful how some skills acquired in education help me so much in parish leadership and ministry.