This is a scene from the movie "Godzilla vs. Kong." The Catholic News Service classification is A-III -- adults. (CNS/Warner Bros. Pictures and Legendary Pictures)

By Catholic News Service Visually spectacular but dramatically feeble creature feature from director Adam Wingard. In following up both 2019’s “Godzilla: King of the Monsters” and “Kong: Skull Island” from 2017, screenwriters Eric Pearson and Max Borenstein entangle the titular showdown in the varied strands of interaction among an ensemble cast with the result that […]

Easter 2021 resurrects hope, joy: “It’s so wonderful to see all of you here!” 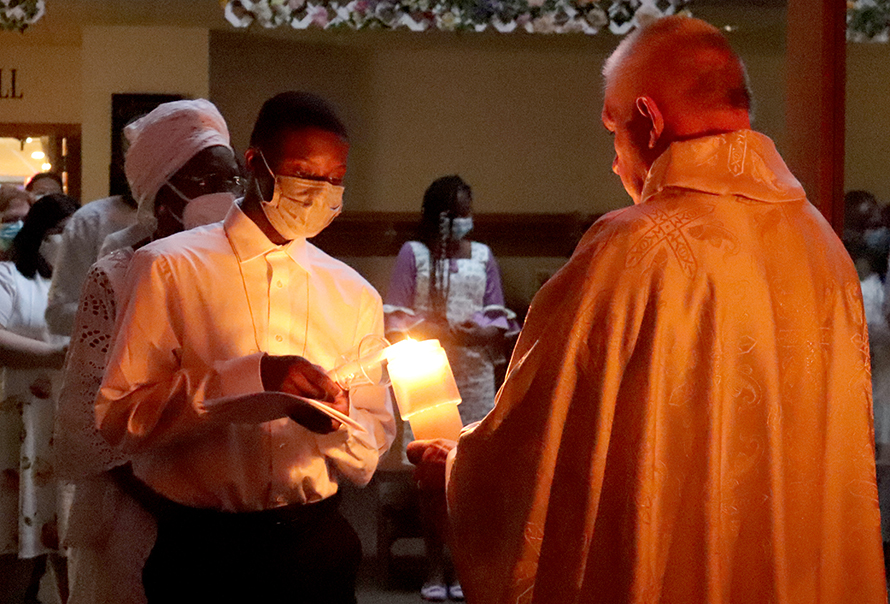 Marc Prosper Awuya lights his candle from the Paschal Candle held by Father Donald Levitt, pastor, at the beginning of the Easter Vigil at Christ the King in Moline. He would make a profession of faith, be confirmed and receive the Eucharist for the first time at the liturgy. (The Catholic Post/Jennifer Willems)

MOLINE — As he looked out at Christ the King Church here during last year’s Easter Vigil, Father Donald Levitt only saw the photos of parishioners that were taped to the pews. It was the beginning of the pandemic and public celebrations of the Mass were suspended. What a difference a year makes. “It is […]

After experiencing Divine Mercy, we must become instruments of it 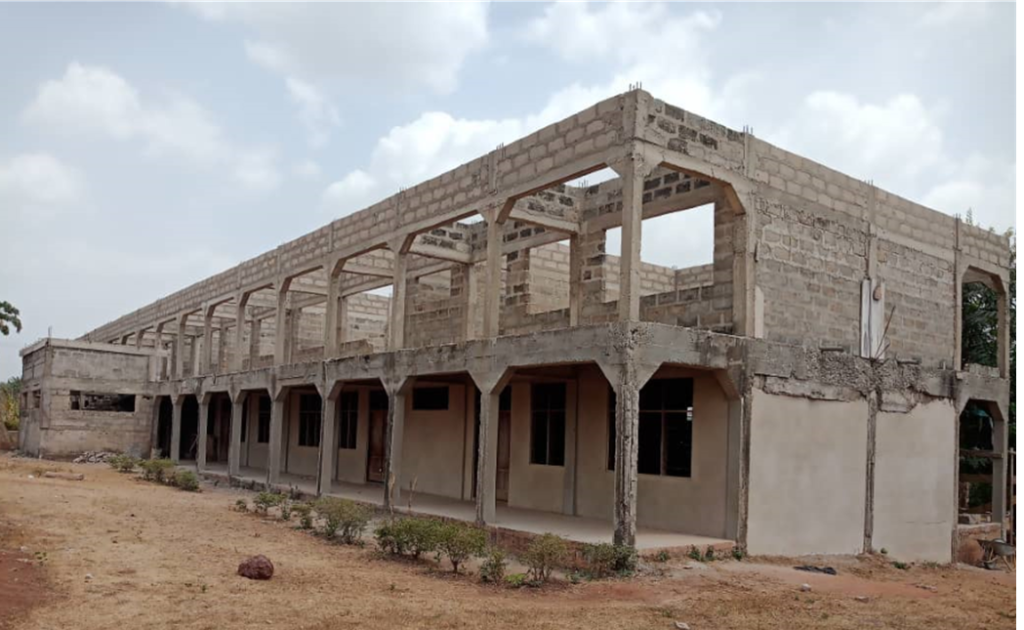 ROCK ISLAND — On a roadside near a remote village in the western African country of Ghana there is a Catholic school that is changing lives thanks in part to a spiritual bridge linking it to St. Pius X Parish here and a name that ties it to the Diocese of Peoria. It would be […]

Paul Moore: Now is always the time of St. Joseph and his silent support 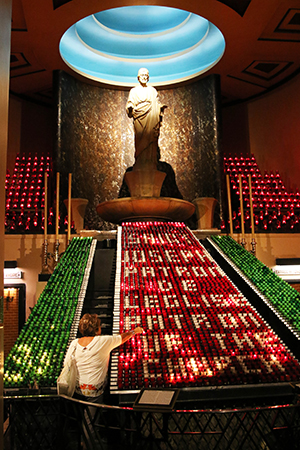 A woman lights a votive candle Oct. 2 at St. Joseph's Oratory in Montreal. Founded by St. André Bessette, a member of the Congregation of the Holy Cross who was canonized in 2010, St. Joseph's Oratory is the world's largest shrine dedicated to St. Joseph and Canada's largest Catholic church building. The candles spell, in French, “St. Joseph, Patron of the Church.” (CNS/Gregory A. Shemitz)

My ears pricked up at the sound of my name. “Did you hear that, Paul? “‘Now is the time of St. Joseph,’” said our parish director of faith formation, Ileen Grebner. I’d been half-listening while gazing out the window. Now a memory flashed of long-ago teachers calling me out of my reverie. Ileen had been […] 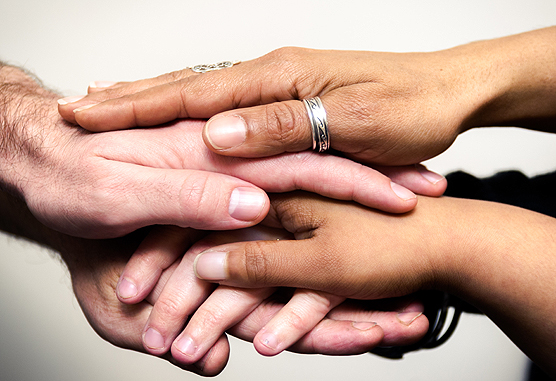 Those mourning the loss of a loved one are invited to take part in a weekly gathering via Zoom sponsored by Catholic Charities of the Diocese of Peoria starting on Wednesday evening, April 7. “Wounded Healers Grief Group” is the name of a new outreach to provide comfort and support, as well as to transform […] 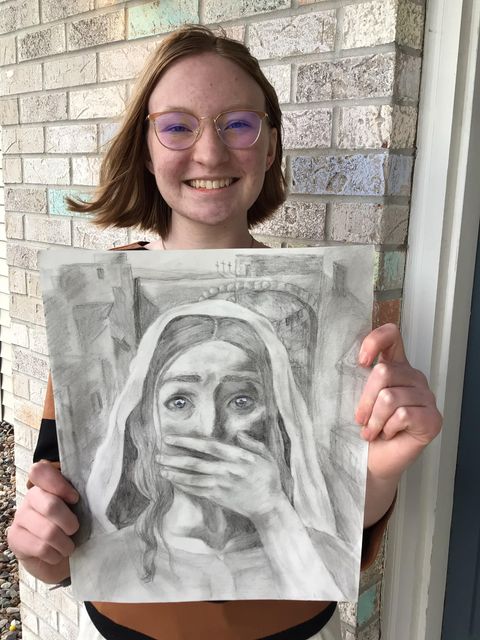 Katy Olsen, 15, of Epiphany Parish in Normal and a freshman at Chesterton Academy of the Sacred Heart in Peoria, holds her drawing of Mary Magdalene's reaction at discovering Jesus' empty tomb. (Provided photo)

NORMAL — While artists throughout the centuries have depicted Jesus’ empty tomb, 15-year-old Katy Olsen flipped the perspective. The result is a captivating study of the face of Mary Magdalene — the first on the scene the morning of the resurrection — at the moment of discovery. “The emotion I hoped to show most was […] 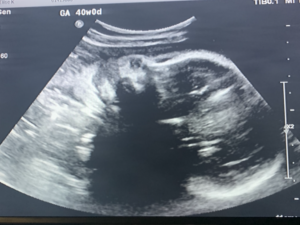 This ultrasound of Fulton Joseph Hood was published at fultonjoseph.com, a site that kept prayer supporters informed of his development.

Fulton Joseph Hood has gone home to God. At a meeting with their obstetrician on March 31, Fulton’s due date, Royce and Elise Hood were told that no heartbeat could be detected for their unborn son. An ultrasound on April 1 confirmed that his heart had stopped beating. Labor was induced and Fulton was delivered […]

Prayers for renewal of the church, priestly ministry voiced at Chrism Mass 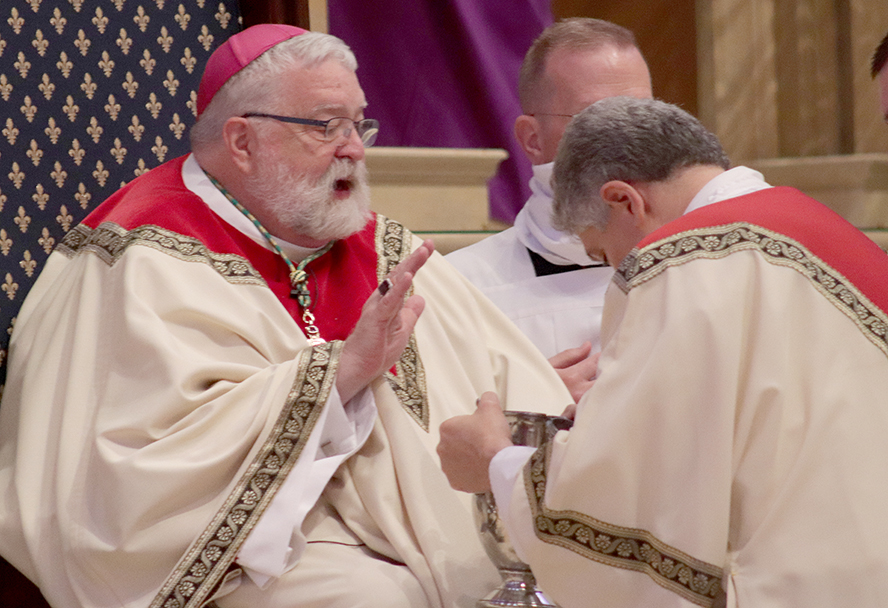 As Deacon Ed Mallow kneels before him holding the vessel with the Oil of the Sick, Bishop Daniel R. Jenky, CSC, blesses it at the Chrism Mass at St. Mary's Cathedral in Peoria. It is one of three oils that were blessed March 30 and will be used in sacramental anointing at parishes around the Diocese of Peoria in the coming year. (The Catholic Post/Jennifer Willems)

As the Chrism Mass returned to its rightful place during Holy Week, Bishop Daniel R. Jenky, CSC, said it was a “special blessing” to be able to gather with the priests and representatives of the religious and laity “to pray for the renewal of the life and all the works of our local church.” He […]