Charred pews, smoked-stained walls and holes in the flooring are seen following the April 28 fire at St. Mary Church in Lexington. (The Catholic Post/Tom Dermody)

LEXINGTON — An early morning fire on April 28 caused extensive smoke and flooring damage to St. Mary Church here and will likely close the church for several months of restoration. 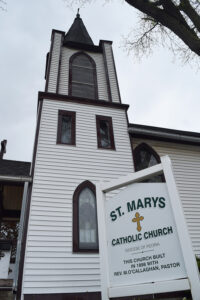 Lexington police reported other overnight vandalism to nearby buildings. “We believe they’re all connected,” said Chief David Belvery.  No suspects have been named. The state fire marshal was on the scene early Wednesday afternoon and Illinois State Police had joined the investigation.

Seven area fire departments eventually joined the Lexington Fire Department in response after the initial 9-1-1 call came in at 3:24 a.m. from a witness who saw smoke coming from the front of the church.

Father Sabel praised the firefighters’ efforts to protect the church while knocking down the blaze and clearing it of smoke. There is a large hole in the church’s center aisle and smoke damage throughout, but the stained glass windows remain intact and areas of the structure cut by the firefighters to release smoke were kept to a minimum.

“I have to send them a ‘thank you,’” said Father Sabel of the firefighters. “They did a wonderful job.” 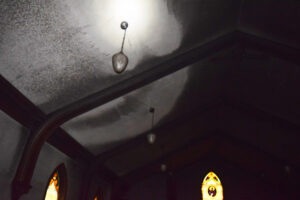 The smoke-stained ceiling of St. Mary Church in Lexington after the April 28 fire. (The Catholic Post/Tom Dermody)

Father Sabel said that during the months of expected restoration the Lexington parish’s weekend Masses of 4 p.m. on Saturday and 9 a.m. on Sunday will be moved to St. Joseph Church in Chenoa – about nine miles to the north — at those same times.

“Parishioners are very disappointed, but are looking forward to refurbishing the inside,” said Father Sabel, who will look to Bishop Daniel R. Jenky, CSC, and other diocesan officials for guidance as the extent of the damage is determined. No estimates had been released as of Wednesday evening but Melissa Block, claims/risk manager for the Catholic Mutual insurance group in the diocese, was at the site Wednesday.

St. Mary Church was built in 1898 during the pastorate of Father M. O’Callaghan and serves more than 100 households. Father Sabel is assisted by Father Father William Keebler, parochial vicar, and the Lexington parish is linked to the Chenoa faith community as well as St. Joseph in Flanagan, and Sts. Peter and Paul in Chatsworth.

Father Sabel said the Blessed Sacrament was safely removed from the church by Father Keebler and taken to St. Joseph Church in Chenoa.

EDITOR’S NOTE: This story will be updated as further details are known.