School year ends with words of praise and hope for principals, pastors 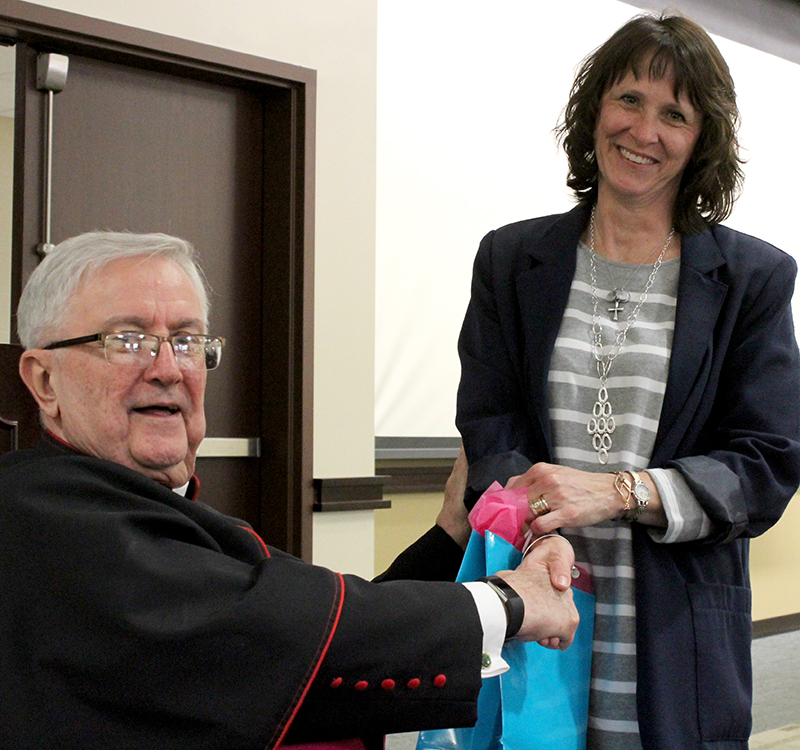 Msgr. Paul Showalter, vicar general, presents a token of appreciation to Judy Clark during the end of the school year luncheon hosted by the Office of Catholic Schools. Clark led Corpus Christi School in Bloomington after principal Gwenn Roche moved away midyear. (The Catholic Post/Jennifer Willems)

Looking out over the Catholic school administrators and priests from the Diocese of Peoria, Msgr. Paul Showalter had nothing but words of praise for their work of passing on the faith to the young people in their care.

“Each of you, as we gather together today, gives me hope,” Msgr. Showalter said during a Mass marking the end of the school year, which was held in the Our Lady of Perpetual Help Chapel at the Spalding Renewal Center in Peoria. “Speaking on behalf of the bishop and the diocese, you give me hope for what you have been doing and what you continue to do.”

Sponsored by the Office of Catholic Schools, the Mass and luncheon that followed were held May 9. As part of the luncheon program, the office recognized two priests and three principals who are retiring, and eight priests and four school administrators who are celebrating milestone anniversaries of service.

In addition, this year’s distinguished teacher, principal and pastor received applause and tokens of appreciation.

As the program began, however, John Graham and Associates presented a check for $1,500 to Immaculate Conception School in Monmouth for scholarships. Accepting the check was principal Randy Frakes and Msgr. Thomas Mack, pastor, and Father Tom Otto, parochial vicar. 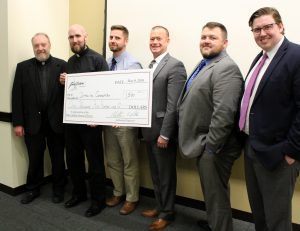 “We have been blessed to be able to work with the Diocese of Peoria for 12 years now as the retirement plan adviser for the diocese,” said Nathan White, financial consultant. “We wanted to thank you for the opportunity to work with you all these years and to have fun with this.”

The company offered a $500 scholarship for one school, with the amount increasing based on the number of people who followed its Facebook page, investwithjga. The scholarship would become $1,000 if 200 people “followed” the page by May 8 and increase to $1,500 if the page was followed by 300 people.

It didn’t take long to hit the top tier.

The name of the winning school was drawn by Msgr. Showalter. He also presented the gifts, provided by the Office of Catholic Schools, to the priests and principals who were honored during the rest of the program.

Dr. Sharon Weiss, superintendent of Catholic schools for the Diocese of Peoria, started with those who are retiring.

“These incredible pastors and principals have given above and beyond for themselves and others and, of course, the church and Jesus Christ,” she said.

Those celebrating milestone anniversaries are: