Msgr. Pizzamiglio to senior status after 52 years of priestly service, 28 in Galesburg

GALESBURG — As Msgr. Ernie Pizzamiglio prepares to move to senior status at age 84 and after 52 years of priestly service, he repeatedly sums up his feelings with one word:

That’s not surprising for someone who begins each day with the prayer: “Thank you, God, for this new day. May I glorify you in every way.” But there is no questioning the sincerity, depth, and breadth of his appreciation for God’s grace — and the support of his parishioners. 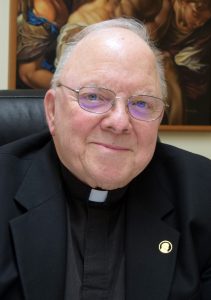 “I have deep gratitude to God for having called me to the priesthood — to allow me to bring the Lord to everyone and be his instrument.” — Msgr. Ernest Pizzamiglio

“I have deep gratitude to God for having called me to the priesthood, to allow me to bring the Lord to everyone and be his instrument,” Msgr. Pizzamiglio said in an interview last week from his office at Immaculate Heart of Mary Parish here, where he has served as pastor for 28 years.

“The priesthood is the greatest gift that any human being can receive from God,” he insists. Recalling how his call to the priesthood began on an Air Force base in Texas when he had a vision of himself holding up a Host at consecration, Msgr. Pizzamiglio’s words confirm that six decades later he has not lost any of the awe of that moment of the Mass.

“To think there is Jesus Christ. I have God right there,” he said, cupping his hands as if holding the consecrated Host. “It’s phenomenal. And then to distribute God to others!”

Msgr. Pizzamiglio also has deep gratitude for his parishioners through the years. And last Sunday, five weeks ahead of his scheduled retirement date of June 13, he had the opportunity to share that appreciation with members of Immaculate Heart of Mary Parish. He voiced his gratitude during Masses on May 13, and parishioners returned the thanks with a reception in the parish activity center later that Sunday afternoon.

In his homilies he “let the people know how much I appreciate all they’ve done for the parish and for myself and how great they were,” said Msgr. Pizzamiglio. “I love this parish. I’ll miss them. But I’ll be around town.”

In fact, next month he will move to an apartment in Seminary Estates, just a few blocks north of the church.

Sunday’s reception was organized by the parish’s women’s group, the Ladies of Mary. Msgr. Pizzamiglio characteristically thanked them for “all that they have always done and are doing.”

And it is fitting that for nearly three decades Msgr. Pizzamiglio has served at a parish where Mary is patron. He calls her “my girl” and “my sweetheart.”

“I consecrated myself to her Immaculate Heart when I was in the seminary,” he told The Catholic Post. “I renew that every day.”

Msgr. Pizzamiglio was born on the South Side of Chicago on Nov. 5, 1933, and was baptized in the Missouri Synod Lutheran Church. His family moved to Spring Valley when he was in third grade, and he was educated in public schools there.

He eventually stopped going to church, but that changed when his Catholic brother-in-law invited him to Mass at Immaculate Conception Parish.

He didn’t understand the Latin or really know what the priest was doing, but felt a powerful attraction.

“I didn’t know it at the time, but it was the Blessed Sacrament. It was our Lord,” Msgr. Pizzamiglio said. “He was drawing me into that. It was so strong I wanted to go back again.”

He continued to go to Mass after he joined the Air Force and started taking instructions in the Catholic faith. He was baptized conditionally and confirmed while serving as an aircraft mechanic during the Korean War.

After he was discharged from the military, he returned to central Illinois and was accepted as a seminarian for the Diocese of Peoria. He was sent to St. Bede College to learn Latin and study liberal arts, and then attended St. Paul Seminary in St. Paul, Minnesota, to study philosophy, and St. Procopius Seminary in Lisle to study theology.

Fifty years later, Msgr. Pizzamiglio would share his vocation story as homilist during the Diocese of Peoria’s Jubilarian Mass in 2016.

He described having a “terrible inferiority complex” as a child because of poor academics.

“When God called me to the priesthood as an adult, I seriously thought He had to scrape the bottom of the barrel to get me,” he told his brother priests. While he found seminary coursework challenging, he persevered through the grace of God and with support from Msgr. George Carton, then vocations director for the Diocese of Peoria, and Bishop Franz.

He told the priests that “if God calls us to anything, then no one — nor anything — will ever prevent it from happening.”

And what happened over the course of Msgr. Pizzamiglio’s priesthood is a lifetime of joyful service to parishes and the Diocese of Peoria.

After ordination, he served for five years as parochial vicar of Holy Family Parish in Peoria — “My first love,” he says. There would be more loves, including Holy Cross in Champaign and Visitation in Kewanee before being named administrator at St. John in Galva.

His pastorates took him to St. Patrick in Elkhart, St. Thomas in Mount Pulaski, and St. John in Middletown, in 1976; St. Mary in DePue in 1981; St. Edward in Chillicothe in 1985; and finally Immaculate Heart of Mary in Galesburg in 1990. While at the Galesburg parish, he has also shepherded the faith community at St. Aloysius in Wataga twice.

“I’ve loved every place I’ve been,” he says.

Msgr. Pizzamiglio served as vicar of the Kewanee Vicariate and, for the past three decades, as  vicar of the Galesburg Vicariate.

He was named a Chaplain to His Holiness with the title of monsignor in 2009.

Not bad for someone who once argued with God that he was not smart enough for priesthood.