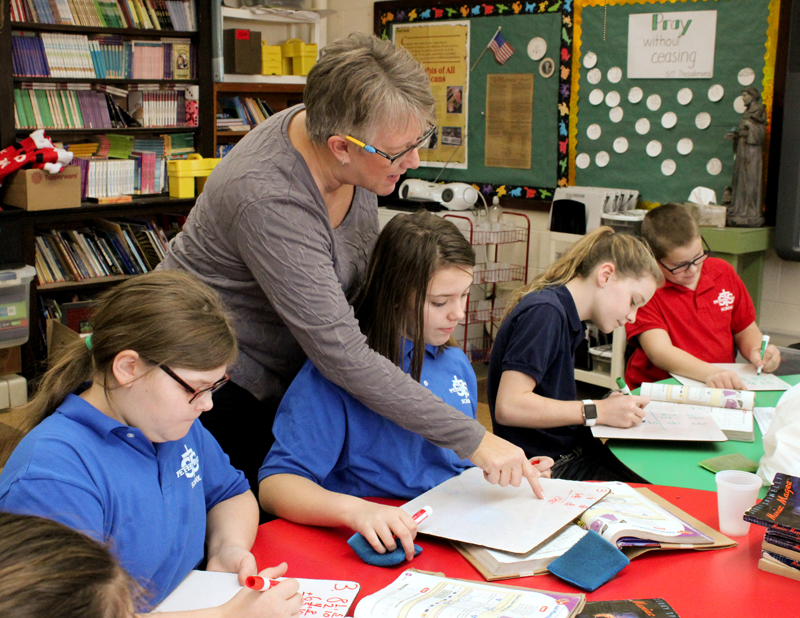 Connie Lake works on math equations with sixth-grader Clair Powelson in her combined fifth- and sixth-grade classroom at Sts. Peter and Paul School in Nauvoo. She said she hopes the students learn to believe in themselves and become committed leaders for Christ by the time they go on to junior high school. (The Catholic Post/Jennifer Willems)

Even as a child, the Nauvoo native taught her younger brother and two younger sisters at home, and assisted the special education teacher while attending Nauvoo-Colusa High School.

This year marks Lake’s 35th anniversary as a classroom teacher, with all of those years spent at her alma mater, Sts. Peter and Paul School in Nauvoo. There is one more reason to celebrate her longtime vocation, however.

Lake has been named the Office of Catholic Schools’ Distinguished Teacher for 2017-18, and will be recognized at a Mass and luncheon on May 9. At that time Bishop Daniel R. Jenky, CSC, and Dr. Sharon Weiss, superintendent of Catholic schools for the Diocese of Peoria, will also honor Msgr. Thomas Mack of Immaculate Conception in Monmouth as the Distinguished Pastor.

Distinguished Principal Maureen Bentley of St. Thomas the Apostle School in Peoria Heights was featured in the Dec. 3, 2017, issue of The Catholic Post.

Lisa Gray, principal of Sts. Peter and Paul School, said Lake is a piece of the school.

“She is so deserving and everybody in this community and this school recognizes that,” she said.

“Humbled” is the word Lake used to describe how she feels about the diocesan honor.

“I don’t know how I’ve been given a life full of blessings, that’s for sure,” she said.

A graduate of McMurray College in Jacksonville, Lake majored in special education and is certified to teach kindergarten through eighth grade. Over the years, the concept of special education has changed, she said.

There are students with special needs across the board now, Lake explained. That includes everything from children with autism, attention deficit hyperactivity disorder and learning disabilities, to poverty and difficult home lives, to gifted students.

Taking each child where he or she is and helping them to blossom is her goal. 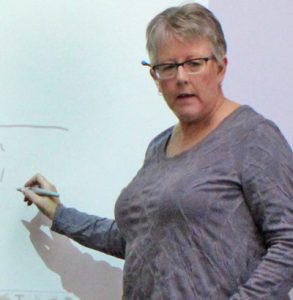 “Every day is so different,” said Connie Lake of teaching at Sts. Peter and Paul School in Nauvoo. Even after 35 years, “I still look forward to seeing those guys every day. I love watching them grow.” (The Catholic Post/Jennifer Willems

Lake has a combined class of fifth- and sixth-graders now, but taught a combined class of third- and fourth-graders for several years, and was principal at Sts. Peter and Paul for a time. When Msgr. Gregory Ketcham was the pastor, she worked with him to start a preschool and kindergarten.

As much as she enjoyed being able to serve the school, Lake admitted that she missed the classroom. When one of the teachers left, she said, “Please let me do this.”

“I love every day. Every day is so different,” Lake said. “I’m always so sad when people aren’t happy with their job.”

She remembers the wisdom shared by another pastor, Msgr. Paul Showalter, who told the teachers, “When being at Sts. Peter and Paul becomes a job and not a joy, then it’s time for you to go.”

“You have to embrace it. The kids feel it. Everybody feels it,” Lake said. “I still look forward to seeing those guys every day. I love watching them grow. I love when my alums come back and knock on my door and give me a big hug.”

While giving her students a firm foundation in academics is a given, Lake said one of the most important things she does is help them develop a good prayer life. That starts with morning prayer as a school community and continues when they return to the classroom.

Not only are the children encouraged to verbalize their prayer intentions, but they also post them on a prayer intention board. Lake reads to them from an “E-mail from God” and then plays a quiet song.

Sometimes they say, “That e-mail was for me,” and sometimes she tells them, “Well, folks, God was talking to me today.”

“Prayer is so important,” Lake said. “The kids miss that prayer time if they don’t have it.”

They also talk about what it means to be a leader for Christ and how to foster peace on earth. Her message is, “It’s got to start with you. You can make a difference.”

Lake said that by the time they leave Sts. Peter and Paul for junior high school, she hopes the students believe in themselves and have found their voice.

“We all have our weaknesses and our strengths and they go together. God made us that way,” she said. “But if you can give the kids the power to believe in themselves, then they can really do anything.”

Lake has been married to her husband, Steve, since 1981. They have a son, who has given them two grandchiildren, and a daughter, who is getting married.

The couple has also opened their home to seven exchange students from countries as diverse as Germany, China and Brazil.

No matter where life and experience take her, Connie Lake said she employs the same guidelines: “I just use what God gives me and throw it out there and have fun every day.”