Maureen Bentley, Diocese of Peoria’s 2017-18 Distinguished Principal, prefers ‘we,’ not ‘I’ 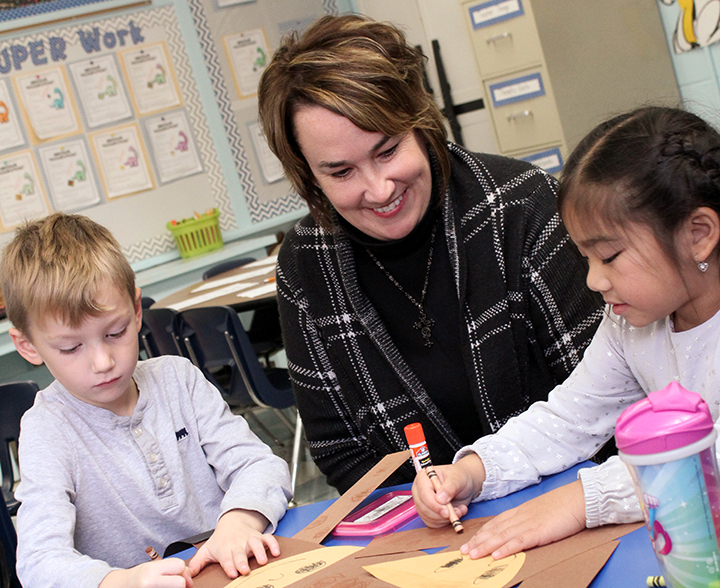 PEORIA HEIGHTS — Maureen Bentley doesn’t use the word “I” very often. In fact, when it comes to St. Thomas the Apostle School, she prefers to talk about what “we” have accomplished.

“We’ve always been a very rigorous school,” said Bentley, who has been principal at the Peoria Heights school since 2004. “We’ve proven ourselves time and time again. What I want to make sure we’re doing is not only staying academically rigorous, but being a well-rounded school. Our goal is to make sure that any student who walks through these doors finds their niche.”

For that commitment to drawing out the gifts and talents of everyone in the community so that St. Thomas the Apostle School continues to move forward, Bentley has been named the Office of Catholic Schools’ Distinguished Principal for 2017-18. She will be recognized at a Mass and luncheon on May 9, 2018.

Bishop Daniel Jenky, CSC, and Dr. Sharon Weiss, superintendent of Catholic schools, will also honor Msgr. Thomas Mack of Immaculate Conception in Monmouth as the Distinguished Pastor and Connie Lake of Sts. Peter and Paul in Nauvoo as the Distinguished Teacher at the luncheon.

She said she has learned from the veteran teachers on the St. Thomas staff, as well as assistant principal Trina Schmidt, who had served as principal of Holy Family in Peoria before she “semi-retired.” That didn’t last long. 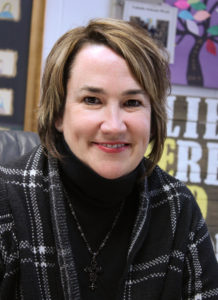 “I grabbed her,” Bentley said with a smile. “She’s a wealth of knowledge.”

Bentley also credited the secretarial staff of Pam Goett, now retired, and Cheryl Reese (“incredible”) for their wisdom and help, and CCD coordinator Angie Robenstein (“phenomenal”) for everything she does.

From Msgr. William Watson, the longtime pastor who hired her over ice cream at a local eatery, she gained confidence that “I can do this.” She said his calm demeanor and willingness to listen were great gifts to her.

She also appreciates Msgr. Jason Gray, pastor since 2015, for being “a huge advocate” for Catholic education.

“He has helped me in so many different ways,” Bentley said, noting that “He pops in the office all the time. It’s been good.”

Perhaps her biggest supporter is her husband of 20 years, Chad, athletic director and teacher of health and physical education at Limestone Walters in Peoria. She said he scaled back on his job to make it possible for her to do what she has to do as principal.

They are the parents of Dillan, 16, and Kaitlyn, 14, and wanted to make sure one parent was always available evenings, weekends and over summer vacation.

A native of Peoria, Bentley attended St. Bernard and Holy Family schools. She studied at Spalding Institute/Academy of Our Lady for two years before making the transition to Peoria Notre Dame High School with her classmates.

She knew in the third or fourth grade that she wanted to be a teacher.

“When I wanted to learn something, I would go into my bedroom, close the door and act as though I was the teacher. That’s how I would learn the information,” she said.

Bentley received her bachelor’s degree in elementary education from Miami University in Oxford, Ohio, and her master’s degree in educational administration from Illinois State University. She taught for one year at St. Philomena in Peoria and then at a public school for several years.

What brought her back to Catholic education were the events of Sept. 11, 2001.

“It was hard because you couldn’t talk about your faith,” Bentley said. “That’s part of why I love being here. You can openly share your faith and you can help one another lean on God.”

To make certain that Catholic identity remains first and foremost at St. Thomas, everyone recites a part of the school’s mission each day: “Teach truth, build character, and inspire service.”

“If the decisions we make don’t follow those, then we’re not making the right decisions,” she said.