Msgr. Paul Showalter, 77, vicar general of the Diocese of Peoria for 14 years and former pastor of parishes in Peoria, Rock Island, and Nauvoo, will move to senior status effective June 13.

He has been granted the honorary title of vicar general emeritus by Bishop Daniel R. Jenky, CSC, “as a sign of my gratitude for his many years of service to the diocese and especially to me personally.”

Profiles of the above three priests may be viewed by clicking on their names.

“It’s my decision and I’m very comfortable with it,” said Msgr. Showalter of his approaching retirement. “I’d rather step away when I’m feeling good and I can honestly say I’ve done a good job.”

Good “jobs” would be more accurate, for in his 52 years of priestly service Msgr. Showalter has been a high school chaplain, pastor, vicar, cathedral rector and, as vicar general, the diocese’s highest official after the bishop. Name a board or committee in the diocese and Msgr. Showalter has probably been part of it at one time or another.

In all his roles, but especially as a diocesan official, he has epitomized servant leadership.

“My goal has been, no matter who I talk to — priest or layman — to ask ‘How can I help? How can I better serve or minister to you?’” Msgr. Showalter told The Catholic Post last week in a wide-ranging interview from his chancery office in the Spalding Pastoral Center. A diocese, he noted, can sometimes seem like a large, faceless entity to those outside its offices. Msgr. Showalter has done his part to joyfully personalize it.

While emphasizing service, Msgr. Showalter’s leadership has also garnered many honors. He was named a prelate of honor with the title of monsignor by Pope John Paul II in 2000, and nine years later Pope Benedict XVI named him a protonotary apostolic, the highest rank of monsignor. He is a papal Knight of the Holy Sepulchre. 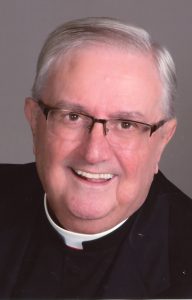 “My goal has been, no matter who I talk to — priest or layman — to ask ‘How can I help? How can I better serve or minister to you?’ — Msgr. Paul Showalter, P.A.

Among his lasting legacies will be leadership of the diocese’s Growing in Faith Together (GIFT) program, a multi-year pastoral planning process at the start of this decade that sought to strengthen the Diocese of Peoria through greater collaboration of its parishes.

While the process tackled difficult issues such as the effect of changing demographics on parishes, it was encouraging for Msgr. Showalter “to realize we had between 800 to 1,000 people around our diocese talking about the present and future of their parish. And they were doing this to help the bishop make decisions.”

Another point of justifiable pride for Msgr. Showalter has been his efforts to promote the worldwide mission of the church. He serves as the diocese’s director of the Propagation of the Faith, an international association coordinating assistance for Catholic missionary priests, brothers, and nuns in mission areas. Venerable Archbishop Fulton J. Sheen, the diocese’s famous native son, was once its national director.

“I grew up with that mission awareness. Our family had it,” said Msgr. Showalter, recalling his childhood in Rock Island. “Early on I thought I wanted to be a missionary.”

He has especially enjoyed working with the many foreign priests now serving in the diocese and hopes that, in retirement, he can continue to assist the diocese’s mission outreach role.

“The life of our parishes is being church. That’s what mission is about,” he said. “That’s what Bishop Sheen was about, the world missions.”

Msgr. Showalter pointed to his uncle, Father Norbert Showalter — a priest of the Archdiocese of Dubuque and a former Navy chaplain — as having a major influence on his decision to pursue the priesthood. It was something he began considering in his grade school days at Sacred Heart in Rock Island.

After a year at Alleman High School, he completed his high school education at St. Bede Academy in Peru. He then attended St. Bede College for two years, studied philosophy and theology at St. Meinrad School of Theology in St. Meinrad, Indiana, and was ordained to the priesthood on May 22, 1966, by Bishop John B. Franz.

“Everybody remembers how happy they were on their ordination day,” said Msgr. Showalter. “I was scared. I wasn’t completely sure if I was making the right decision.

“All the good things that have happened,” he continued, “have reaffirmed in my life that this is what God was calling me to be.”

His first assignments were as parochial vicar at Immaculate Conception Parish in Monmouth and chaplain at Central Catholic High School in Bloomington, with residence at Holy Trinity Parish in Bloomington and then at St. Patrick, Wapella.

In 1980, he was named pastor of Sts. Peter and Paul Parish in Nauvoo and Sacred Heart, Dallas City. He would serve in Nauvoo for 12 years, but his affection for and connection to the historic community on the banks of the Mississippi River remains. He purchased a two-bedroom house on the river’s banks in 1995, which he has used as a getaway retreat through the years. Eventually it will be his retirement home, though Msgr. Showalter says he will remain in Peoria for at least the next year.

During his time in Nauvoo he also became close to the Benedictine Sisters, a relationship he continues now that the community’s monastery is in Rock Island.

Msgr. Showalter is grateful that he eventually learned as pastor “that I didn’t have to take on the whole burden myself. I had all these people willing to help me, if I let them.”

Msgr. Showalter recalls his “shock” when, after a priest’s funeral in Geneseo in 2004, Bishop Jenky asked him to be his vicar general.

“I told him I have forgotten more canon law than I remember,” said Msgr. Showalter. But the bishop wanted him because of his knowledge of the diocese and its priests.

“We’ve got a great presbyterate,” he says. “I’m so proud to be part of the Diocese of Peoria.”

So he moved to Peoria in 2005, serving for a time as administrator of St. Vincent de Paul Parish. While remaining vicar general, he became pastor of St. Bernard Parish in Peoria — where he still resides — in 2006, later adding duties as rector of St. Mary’s Cathedral and pastor of St. Peter’s Parish. He has focused solely on vicar general duties since 2011, and has shared that role with Msgr. James Kruse since 2012.

Msgr. Showalter said he has enjoyed not only his working relationship with Bishop Jenky but also the deep friendship they have developed. “We have a unique relationship,” he said. “I have been blessed the bishop and I have hit it off.”

Msgr. Showalter talks candidly about his struggles with alcoholism. After 20 years of sobriety, he had a relapse last November and spent several months in a treatment program. He is grateful for the time of reflection and guidance.

“I was able to begin looking at things,” he said. “I found a renewed spirituality in priesthood,” and also the strength to face retirement and fears of growing older.

Leadership, even servant leadership, includes difficult choices at times, and Msgr. Showalter apologized for “decisions over the years that have hurt or been misunderstood.”

Bishop Jenky, however, spoke for Msgr. Showalter’s past parishioners and the priests of the diocese in expressing affection and gratitude for his vicar general.

“I am truly grateful for his service, assistance, and wise advice,” said the bishop.

Msgr. Showalter, who celebrated the 50th anniversary of his ordination in 2016, said he hopes to have a “creative retirement,” helping out where he can. Mail may be sent to him at St. Bernard Rectory, 509 E. Kansas St., Peoria, IL 61603.