SPRING VALLEY — Father Robert D. Spilman, 71, who has served in Spring Valley since 2004 and who guided the local Catholic community through the creation of a new parish dedicated to the Nativity of Our Lord five years ago, will transition to senior status on June 13.

Father Spilman, whose 22 years of priestly service followed a previous career in banking, is a Galesburg native and a graduate of Costa Catholic High School there. 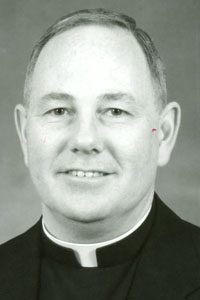 He served in the U.S. Air Force and was honorably discharged in 1970 with the rank of sergeant.

After earning an associate degree from Carl Sandburg Junior College in Galesburg he was employed in banking in Galesburg, East Peoria, and Peoria until 1991.

He then began preparation for the priesthood at Holy Apostles Seminary in Cromwell, Connecticut in 1992, completing studies at Mount St. Mary’s Seminary in Emmitsburg, Maryland.

After serving for two years as parochial vicar of St. Joseph Parish, Colfax, and St. Rose, Strawn, he was named pastor of St. Theresa Parish, Earlville, in 2001. Three years later came his move to Spring Valley, first as pastor of St. Anthony Parish and temporary administrator of St. Mary Parish, Peru. He would later add duties as pastor of Immaculate Conception (2008) and Sts. Peter and Paul (2009) parishes, also in Spring Valley, as well as St. Gertrude Parish in Seatonville.

Following the Growing in Faith Together diocese-wide parish planning process, Bishop Daniel R. Jenky, CSC, accepted the recommendation to merge the three Spring Valley parishes into a newly created one.

Father Spilman was named pastor, and celebrated the first Mass under the new patronage of the Nativity of Our Lord on July 6, 2013.

Acknowledging the challenges but looking forward with hope, Father Spilman told members of the new parish ”we are called to be men and women who love, who promote peace, and who care about our brothers and our sisters.”

“That’s what Christ came to do and that’s what we’re called to do,” he continued. “To bring peace and love into our world and to our community.”

He also noted that in a community with many ethnic influences, The Nativity of Our Lord encompasses all of them.

“It doesn’t make any difference if you’re Polish, Lithuanian, Irish, German — we celebrate the Nativity at Christmas, don’t we?” he said. “Now we take that wonderful feast of Dec. 25 and make it a feast every day of our lives.”

Father Spilman was critically injured in an automobile accident in the spring of 2016, but would return to the parish following several months of recovery.