Not really ‘retiring,’ Father Carl LoPresti will continue ministry among the sick

CHENOA — Father Carl LoPresti may be starting life as a senior priest of the Diocese of Peoria on June 13, but he doesn’t consider it to be retirement.

“My plans are to live in Fairbury and continue my ministry among the sick, the shut-ins, people in hospitals and nursing homes, and perhaps even expand it into helping my brother priests who are ailing,” he said during a telephone interview from the rectory at St. Joseph Parish in Chenoa, where he has been pastor since 1999. Father LoPresti, 74, also serves the parishes of St. Mary in Lexington and St. Joseph in Colfax. 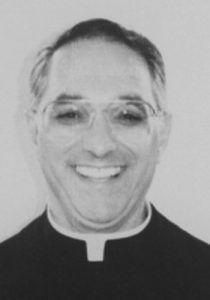 “I feel nothing but gratitude, tremendous gratitude, for the gift that has been given to me in the priesthood itself, especially for the privilege to serve and help.” — Father Carl LoPresti

It is a ministry he has been passionate about since his days at St. Charles Borromeo Seminary in Wynnewood, Pennsylvania. He credits a wise Quaker woman at Holy Redeemer Hospital in Philadelphia for taking him under her wing one day a week for three or four years and teaching him what to do.

“At the core of the work is bringing the mercy of God and the patience and compassion and understanding of God to people who are sick,” Father LoPresti said. “It’s that simple.”

“But my work has taken me all over the diocese, whether it be (OSF) Saint Francis in Peoria or even hospitals in Springfield. Wherever my people wound up, that’s where I went,” he said. “I’ve even been to Chicago.”

It has given him an opportunity to serve people in a different way than the first 23 years of his adult life, which was spent as a federal prosecutor and trial attorney for the U.S. Department of Justice in Dallas, Texas.

Born in Indiana, Pennsylvania, on April 8, 1944, Father LoPresti said he became interested in the priesthood at 14. He pursued a law degree at Washington University in St. Louis, but the seed of that vocation continued to grow as he got to know and spend time with priests.

Eventually he realized he needed to do something about the vocation he had been keeping in the background. His involvement in pro-life work brought him to the Diocese of Peoria to meet with Bishop John J. Myers, who had a reputation for being a pro-life bishop.

At the age of 48, Father LoPresti entered St. Charles Borromeo Seminary and “fell in love.”

“It was really a joy to learn and to study and to meditate and think about the realities of the faith,” he said. “I really enjoyed it.”

Ordained by Bishop Myers on May 24, 1997, at St. Mary’s Cathedral in Peoria, he was assigned to Immaculate Conception in Monmouth, St. Andrew in Oquawka, and St. Patrick in Raritan. After serving as parochial vicar for two years, Father LoPresti began his long tenure as pastor of the faith communities in Chenoa and Lexington, adding Colfax in 2001.

“I’ve made a lot of friends along the way,” he said. “I’m only going to be 10 or 11 miles away from my principal place of ministry for the last 18 years — far enough away so that I don’t interfere, yet close enough that I can still have contact with my parish family.”

Father LoPresti goes back two or three generations with some of the parishioners now and said, “They really have become my family.”

As he prepares for the transition that’s coming, Father LoPresti said he’s filled with “tremendous gratitude.”

“I feel nothing but gratitude, tremendous gratitude, for the gift that has been given to me in the priesthood itself, especially for the privilege to serve and help,” he said.