MENDOTA — While it is a given that students will achieve academic success at Holy Cross School, principal Anita Kobilsek wants so much more for them.

“This is my underlying philosophy: that the kids know, love and serve Jesus, that they know Jesus is truly present in the Eucharist — body, blood, soul and divinity — and to help them get to heaven,” Kobilsek told The Catholic Post. “That’s really my inner mission.”

That commitment to Catholic education, as well as her work to promote vocations awareness and her longtime involvement with Teens Encounter Christ, have been recognized by the Office of Catholic Schools and made Kobilsek the Distinguished Principal for the 2016-17 academic year. She will be honored, along with Distinguished Teachers Krista Hinkley of The High School of Saint Thomas More in Champaign and Sally Martin of St. Mary School in Kickapoo, and Father William Miller of Costa Catholic Academy, Distinguished Pastor, at a Mass and luncheon planned for May 10.

Being named the Distinguished Principal is very humbling, said Kobilsek, who preferred to talk about Holy Cross’ pioneering work to put technology into the hands of each student and her “awesome” teachers, who continually look for new and better ways to incorporate it into their lesson plans. She also credits the faculty and staff, school families and parishioners for stepping forward to take those ideas and make them happen.

“There are so many blessings here,” she said.

Kobilsek has had an opportunity to observe many blessings in her 32 years as a Catholic school teacher and principal. Except for her first year of teaching at Epiphany School in Normal (1985-86) and her first year as principal at LaSalle Catholic (2000-01), all of those years have been spent at Holy Cross in Mendota.

Kobilsek grew up in nearby Peterstown and attended Sts. Peter and Paul School through the sixth grade. When it closed, she went to Holy Cross for seventh and eighth grades. 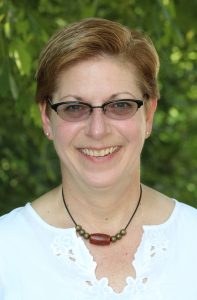 “This is my underlying philosophy,” said Anita Kobilsek, “that the kids know, love and serve Jesus, that they know Jesus is truly present in the Eucharist — body, blood, soul and divinity — and to help them get to heaven.” (The Catholic Post/Jennifer Willems)

A very small school, Sts. Peter and Paul had just three classrooms — one for first, second and third grades, one for fourth, fifth and sixth grades, and one for seventh and eighth grades. Watching people multitasking and working together to help students of all ages, as well as being able to do peer-to-peer work at a young age provided a foundation for a career in education.

“I love kids. I’ve always loved teaching,” Kobilsek said. “When I was a kid I would play school and made my brothers play school. It’s the joy of seeing people learn. That’s always been part of me.”

The Sisters of St. Francis at Sts. Peter and Paul and the Dominican Sisters of Springfield at Holy Cross also provided a strong influence and encouraged her to pursue teaching. One them, Sister Anne Stremlau, was not only her teacher and principal, but also her cousin. Musically inclined, the older woman saw talent in her young pupil and got her playing at Mass when she was 11.

Kobilsek still plays for Masses at Sts. Peter and Paul in Peterstown, which remains her parish, and at school Masses at Holy Cross.

Vocations awareness is another passion and Kobilsek and her husband, Frank, have been involved on the parish and diocesan level for many years. Her interest “ramped up” when her nephew, Father Jacob Rose, entered the seminary and to this day the students at Holy Cross adopt all of the seminarians of the Diocese of Peoria, supporting them with letters, prayers and the occasional care package.

“We call ourselves the ‘prayer warriors’ for the seminarians,” she said, noting that priests and women religious are frequent guests at the school.

In addition, the students pray the “Hear, Choose, Serve” Chaplet at each school Mass, pledging to hear Jesus, choose Jesus and serve Jesus throughout their lives. At the end, they ask God to “help me to want to be what you want me to be,” a vocation prayer.

Even though the students leave after eighth grade graduation, Kobilsek continues to be involved in their lives through Teens Encounter Christ. She is the assistant spiritual director at the Peterstown TEC Center and helps with weekends throughout the year.

In the end, Kobilsek said working in Catholic education isn’t about taking a job and choosing to stay.

“It really isn’t about this world,” she said. “It’s about preparing people for the next.”