Father William Miller, the Diocese of Peoria's Distinguished School Pastor this year, is shown with kindergartners during a recent visit to Costa Catholic Academy in Galesburg. (The Catholic Post/Jennifer Willems)

GALESBURG — One of the first things Rosminian Father Joseph Costa did when he arrived in Galesburg in the 1870s was to start a Catholic school. While much has changed in education — and the world — over the years, the current canonical pastor of Costa Catholic Academy said it is important to focus on what doesn’t change.

“We have this unique opportunity to go deeper in our Catholic tradition and to progress in terms of what is the latest and the best means of teaching,” said Father William Miller, who also serves as pastor of St. Patrick and Corpus Christi in Galesburg and Sacred Heart in Abingdon.

“It’s interesting that there’s this kind of going back to tradition and going forward in terms of academics and the whole way we teach, of being open to what are the best means,” he told The Catholic Post during a recent interview in the school’s chapel. “How can we bring out the best in our children, give them the best education? An essential part of that is Catholic identity.”

For his ability to put a foot in both worlds and use the lessons to foster that Catholic identity, Father Miller has been named the Distinguished School Pastor by the Office of Catholic Schools. He will be honored along with Distinguished Principal Anita Kobilsek of Holy Cross School, Mendota, and Distinguished Teachers Sally Martin of St. Mary School, Kickapoo, and Krista Hinkley of The High School of Saint Thomas More, Champaign, at a Mass and luncheon on May 10.

EXCELLENT IN EVERY WAY

Father Miller, who has ministered in the Galesburg area since 2002, said the recognition by the Office of Catholic Schools came as a surprise.

“There are so many of my brother priests who I admire for their service to Catholic schools and their length of involvement,” he said. “So honestly it never occurred to me that this was something I would receive.” 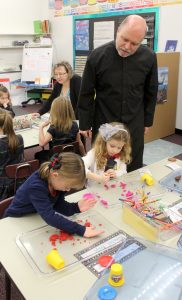 His incentive — and the mission of everyone at Costa Catholic — is to put the children first and keep trying to do what is best for them.

“The wonderful thing about our Catholic tradition is that it does promote excellence in every area,” Father Miller said. “To promote Catholic education is not a choice between academic excellence and faith. In fact, it is our faith that calls us to be excellent in every way, to use our gifts for the best, and to give our children a very well-rounded formation — soul, mind and body.”

An addition to the school that was completed and dedicated in 2015 unified the student body and has brought everyone together more frequently for Mass. Father Miller said it’s been an inspiration to see “the very little ones” and their capacity to enter into worship.

Once a month he takes a class to the nearby adoration chapel for Mass. There are no duties assigned, just an opportunity to be together with the Lord.

“You also get a sense of their knowledge of the prayers and I think it kind of encourages them to be more responsive,” Father Miller said. “That has been a great experience.”

While pastoral care for three parishes as well as the school and his work as vicar for respect life for the Diocese of Peoria doesn’t allow him to teach on a regular basis, he encourages the teachers to invite him into the classrooms when there is something special going on or students have questions. One of those opportunities was visiting each class to talk about the sacrament of reconciliation.

The funniest question he ever got: “Will we all be bald in heaven?”

“The only thing I could think was that because I was bald she thought maybe this is how we’re all going to be,” he said, laughing. “I said, ‘Absolutely not! I hope to get all of my hair back and I hope you’ll still recognize me.’”

PASSING ON THE FAITH

Born in Harvey and raised in Columbus, Ohio, Father Miller came to Peoria for the first time in 1977 as a novice for the Rosminians. He returned in 1991 to serve as rector and novice master at Rosmini House in West Peoria and has been in central Illinois ever since.

Father Miller would go on to serve nine years as provincial for the members of his community in the United States.

He was assigned to a “six-week stint” with the Galesburg and Abingdon faith communities in 2002 “and here we are.”

“But I’m very glad how it worked out,” he told The Post.

What has given him the most satisfaction during his time at Costa Catholic is being able to pass on the faith and witnessing the faith in others — especially in the children and young people.

“We hear so much bad stuff and we see so much brokenness in the world, which is certainly part of the picture,” Father Miller said. “But there are still wonderful families that are living sacrificial lives and Catholic education is part of that sacrificial life that they’re living for their children.”