St. Mary, Kickapoo, ‘the place for me,’ says one of diocese’s ‘Distinguished Teachers’ 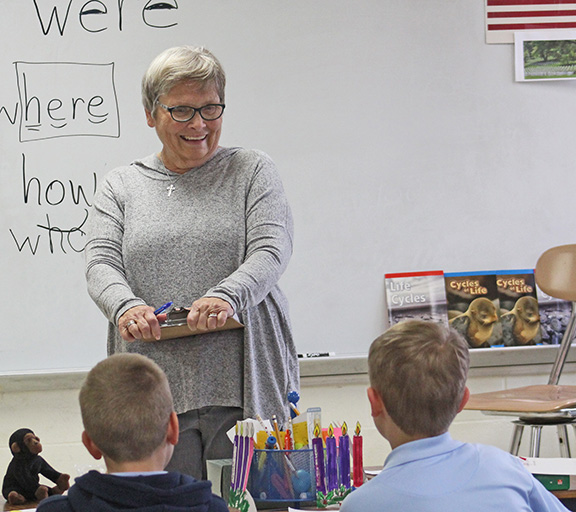 Sally Martin enjoys the playfulness of "my 10 little men" at St. Mary School in Kickapoo. "They're my energy," she said. (The Catholic Post/Jennifer Willems)

KICKAPOO — Walking into a classroom of 52 third-graders might seem like a daunting task, but for Sally Martin it was a defining moment in a career that has spanned five decades.

Another came this month when Martin, who teaches a combined class of third- and fourth-graders at St. Mary School, was named one of two Distinguished Teachers for the 2016-17 school year by the Office of Catholic Schools of the Diocese of Peoria.

She will be honored during a Mass and luncheon on May 10, 2017, along with Krista Hinkley of The High School of Saint Thomas More in Champaign, the other Distinguished Teacher; Anita Kobilsek of Holy Cross School in Mendota, Distinguished Principal; and Father William Miller, IC, of Costa Catholic Academy in Galesburg, Distinguished Pastor.

“This is so far beyond anything I would have imagined,” Martin told The Catholic Post. “This is nothing I ever anticipated.”

In fact, when Rick Pantages, principal, tried to tell her the good news it didn’t sink in right away.

“Rick was more excited than I was — I had so many other things on my mind,” she said, laughing at the memory.

“Every student gets up and does book reports and oral reports and speaks to the class. That just amazes me,” Pantages said. “Everybody’s participating. It’s just a really neat classroom. I enjoy coming in here.”

So does Martin, who has already retired once from teaching.

“Everybody says to me, ‘When are you going to retire?’,” she said. Her son advised her to respond, “I did retire and I’m doing now exactly what I want to do.”

“That’s true. I’m doing exactly what I want to do,” Martin said. “I guess we can call this my retirement.”

After graduating from Central High School in Peoria, Martin went to Marian University in Indianapolis for two years. She didn’t know what she wanted to do with her life, so she left.

Provisional teaching certificate in hand, she saw there was an opening at St. Philomena School in Peoria and applied. She ended up with that class of 52 third-graders — and discovered a lifelong love of teaching.

“I just kind of fell in love with those kids,” Martin recalled. “And I found out I could do a classroom. I could handle it.”

Martin went back to school and turned that provisional teaching certificate into a bachelor’s degree at Bradley University. A master’s degree from Illinois State University would follow when she was 60.

While she didn’t attend the ceremony when she graduated from Bradley, she did for her master’s degree and was cheered on by her son and five daughters. She now has 19 grandchildren and three great-grandchildren, with one more on the way this month.

Throughout her career, Martin has tried to help students understand the importance of respect for others and seeing that everyone is talented in some way.

Along the way, Martin taught in Sunnyland and Winnetka, and served at Pleasant Valley Elementary School in Peoria for 31 years. She retired, but kept driving by the Kickapoo Catholic school with her husband, Phil, and decided to do some substitute teaching here.

After a year she went home and told him, “I think this is it. This is the place for me.” That was nine years ago.

Throughout her career, Martin has tried to help students understand the importance of respect for others and seeing that everyone is talented in some way. She also has come to realize that no matter what she does, children will learn.

“I’ve always felt like if I didn’t get in their way, and provided a good environment, they would learn,” Martin explained. “You just make sure you’ve got an environment that makes the learning happen in a positive way.”

The Office of Catholic Schools of the Diocese of Peoria is celebrating the work of three other “distinguished” educators during the 2016-17 school year. They are:

Distinguished Pastor: Father William Miller, IC, of Costa Catholic Academy, Galesburg. He is the spiritual leader of Corpus Christi and St. Patrick in Galesburg and Sacred Heart in Abingdon. This award honors pastors who have given “outstanding support to Catholic elementary education.”

Distinguished Principal: Anita Kobilsek of Holy Cross School, Mendota. She has been teacher and administrator in

Catholic schools for more than 30 years and was cited for providing “effective faith-filled leadership in ways that inspire teachers and others to achieve and contribute to the school environment.”

Distinguished Teacher: Krista Hinkley, The High School of Saint Thomas More, Champaign. In addition to serving as an English teacher, she is assistant athletic director, chair of the English Department, faculty mentor for the Student Council, and faculty sponsor for the senior class.

The award is given to a teacher who “strives for excellence in teaching, contributes significantly to the learning community, and lives out a clear philosophy of Catholic education.” This is the first time the Office of Catholic Schools has honored two teachers in one year.

Father Miller, Kobilsek and Hinkley will be featured in the Catholic Schools Week section of The Catholic Post, which will be published in the Jan. 29, 2017, issue. All four of the distinguished educators will be recognized formally by the Office of Catholic Schools during a Mass and luncheon planned for May 10, 2017.