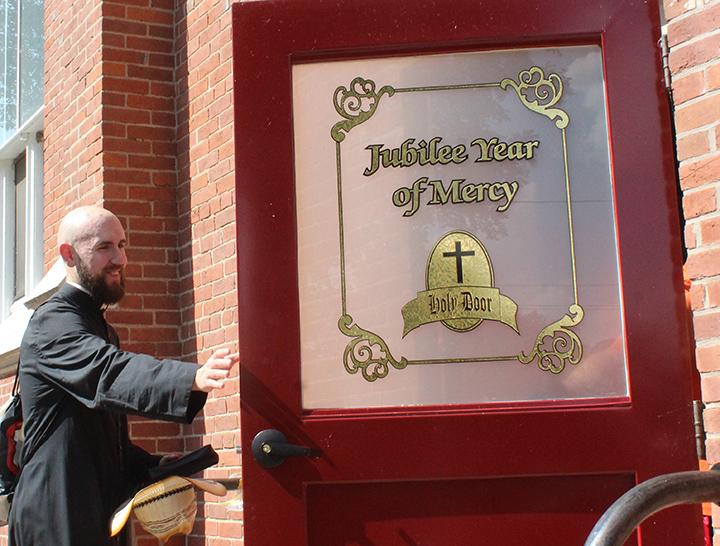 As the Jubilee Year of Mercy draws to a close, it is with grateful hearts that pastors, chaplains and pastoral ministers note that people of all ages accepted the invitation to experience God’s mercy for themselves and extend it to others.

“I’ve had the grace of being the pastor of two Holy Doors — the rector of St. Mary’s Cathedral and Sacred Heart — and I can say in both of those communities we have seen tremendous fruits, a real increase in the sacrament of reconciliation,” Msgr. Stanley Deptula told The Catholic Post.

“In fact, at Sacred Heart we’re in the middle of preparing to build a second confessional,” he said. “We have so many more confessions. And, of course, we pray that the Holy Spirit will continue that tremendous work of mercy even after the year ends, that a real fruit will be the general increase in people’s love of mercy.”

The Peoria churches were two of seven around the diocese that were designated as pilgrimage sites by Bishop Daniel R. Jenky, CSC, for the Year of Mercy. By entering the Holy Doors of Mercy at each church or chapel, the faithful could gain a plenary indulgence by seeking the sacrament of reconciliation, receiving the Eucharist, and praying for the intentions of the pope.

At St. Mary’s Cathedral, Bishop Jenky will symbolically hammer the Holy Doors shut at the 10:30 a.m. Mass on Nov. 20, the Solemnity of Christ the King, bringing the Year of Mercy to an end. Phil Lee, assistant director of the diocese’s Office of Divine Worship, said they will use prayers adapted from what the Vatican provided.

Msgr. Mark Merdian said they will ceremoniously close the Holy Door at St. Pius X at the 11 a.m. Mass on Nov. 20. It will be sealed with drapery and a cord and remain closed until the following Sunday, Nov. 27, the First Sunday of Advent and the beginning of a new church year.

“It really was a great honor to be named a Holy Door for the diocese,” Msgr. Merdian said. “People came from as far away as Galesburg and the western part of the diocese for little pilgrimages. We asked our parishioners to be welcoming.” 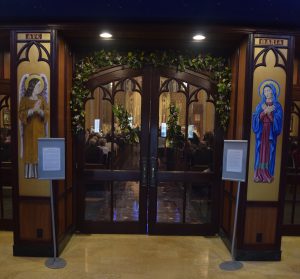 Bishop Jenky will symbolically hammer the Holy Doors at St. Mary’s Cathedral in Peoria shut at the 10:30 a.m. Mass on Sunday, Nov. 20. (The Catholic Post/Tom Dermody)

He noticed that people demonstrated a willingness to go out and be merciful in their daily dealings with others, as Pope Francis asked, and said, “I would say people have been more mindful of love, mercy, kindness and charity toward others.”

One act of mercy the parish committed to as a whole was adopting a Congolese refugee family in partnership with World Relief. The children are signed up for school and the father is taking pre-employment classes, Msgr. Merdian said.

Because the students at St. John’s Catholic Newman Center in Champaign and St. John Paul II Catholic Newman Center in Normal will be on break that week, the Holy Doors will be closed in a simple way. Nevertheless, those involved in campus ministry said the students and members of the community have been deeply touched by the presence of the Holy Doors at the chapels.

“There are around us everywhere people that are affected by illness and death, and immediately when someone says they have a grandfather who has passed away or someone has been in an accident, the students will say, ‘Have you gone through the Holy Door yet?’ or ‘We’ll go through the Holy Door for them,’” she told The Post. “They take great confidence and peace knowing that they’re offering this plenary indulgence” for others.

Sister Clara Maria added that they extended the hours at St. Robert Bellarmine Chapel to make it more accessible to people. There were also more opportunities for eucharistic adoration, confession and Masses.

“It just encourages a deeper pilgrimage of faith in our lives as we go to on to understand mercy, and why and what it is for us and how we can apply it in our everyday lives,” she said of the Year of Mercy.

While there will be no special ritual to close the Holy Doors at the Newman Center, the Bishop’s Commission on Women is hosting a celebration on Saturday, Nov. 19, starting with registration at 8:30 a.m. Father David Whiteside, the group’s spiritual director, will offer Mass at 9 a.m. and hear confessions afterward.

The morning includes a talk on mercy by Sister Clara Maria and will conclude with the Divine Mercy Chaplet.

There is no charge, but registration is requested. Send the number of those who will attend to Deena Pavinato, chairperson, at dpavinato@att.net.

St. John’s Catholic Newman Center has always had a strong tradition of people seeking out the sacrament of reconciliation and that remained true during the Year of Mercy, said Father Luke Spannagel, head chaplain.

What the year provided for the students was a better understanding of what a plenary indulgence is and remove some of the stigma attached to the term, he said. It also provided an opportunity for the community at large to visit the chapel and see the faithfulness of the students and be inspired by them.

“I regularly have people say things like, ‘Being here today gives me hope for the future of the church,’ or ‘Being here today gave me a glimpse of what heaven is going to be like,’ which is really uplifting,” according to Father Spannagel.

And it made the priests more aware of preaching about God’s love and mercy for us, he said.

Among the pilgrims who visited St. John’s Catholic Chapel was a group that walked from St. Mary’s Church in Champaign to the Newman Center, despite the rainy day, and stayed for confessions in Spanish.

Father Jacob Valle, parochial vicar for the LaSalle Catholic Community, said the Shrine of the Most Holy Rosary hosted pilgrimages by youth groups, adult groups, parishes and prayer groups from all over the diocese.

“There have been some beautiful conversion moments,” Msgr. Deptula said. “These are not just the devout, the people you might think would be coming, but people who are really hearing the Lord’s call for conversion that have been coming to the Holy Doors. It’s been beautiful.”