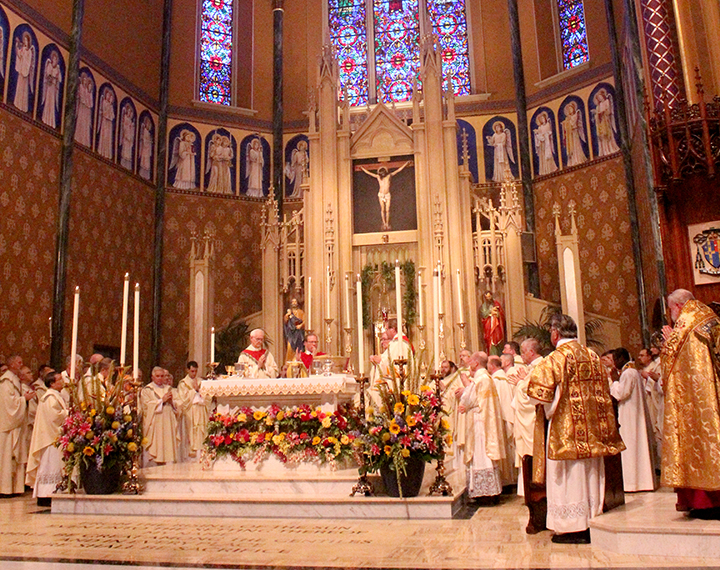 The newly restored sanctuary of St. Mary's Cathedral in Peoria is seen in this photo from the Founder's Day Mass on Aug. 25. (The Catholic Post/Jennifer Willems)

The founding bishop of the Diocese of Peoria and a restoration of the cathedral he built were celebrated in five days of events that linked the past, present, and future of the Catholic Church in central Illinois.

“There is an awful lot of happiness in this cathedral this afternoon,” said Bishop Daniel R. Jenky, CSC, in welcoming the assembly that filled St. Mary’s Cathedral for a Founder’s Day Mass on Thursday afternoon, Aug. 25.

The Mass was celebrated on the 100th anniversary of the death of Bishop John Lancaster Spalding, who guided the diocese through its first three decades and oversaw the construction of the cathedral in the late 1880s. The nearly two-hour liturgy capped centenary observances that included a Requiem Mass the preceding evening and the praying of the rosary that morning at the Bishop’s Mausoleum at St. Mary’s Cemetery in West Peoria. 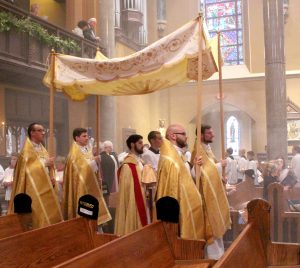 Father Michael Pica carries the Blessed Sacrament in a eucharistic procession throughout the newly restored cathedral. (The Catholic Post/Jennifer Willems)

But as he gave thanks for the “life and witness of our founding bishop,” Bishop Jenky also led prayers and expressions of gratitude for the just completed renewal of the cathedral.

“Good work and well done!” the bishop told all involved in the three-year process, including representatives of Daprato Rigali Studios — the Chicago-based company given the commission to restore the cathedral. The work began in 2014 with a series of repairs to the roof, gutters, and exterior stone. It then transitioned to the interior, with plaster work and new tile flooring and a redesign that dramatically changed the look with new colors, artwork and religious features.

“It is the Lord who built this house and we give thanks to God,” said Bishop Jenky, proclaiming forcefully anew that “This is God’s house!”

The opening procession of the nearly two-hour liturgy included about 90 priests, 70 candle-bearing altar servers from Catholic schools around the Diocese of Peoria, as well as deacons, seminarians, other liturgical ministers and a Knights of Columbus Honor Guard.

Bishop Jenky, who is recovering from cataract surgery, presided from the cathedral’s renovated cathedra, or bishop’s chair. The chair is composed of several original elements of a cathedra dating to the 1930s era and used by Bishop Joseph H. Schlarman. A tall, canopied panel behind the cathedra features Bishop Jenky’s crest.

Msgr. Stanley Deptula, cathedral rector and director of the diocesan Office of Divine Worship, was principal celebrant of the Mass.

Those attending the Founder’s Day Mass received a 28-page booklet inviting visitors to “Rediscover St. Mary’s” and offering a self-guided tour. The booklet explained elements of the cathedral old and new. Among the new features are:

A keepsake Mass booklet included a list of donors to the restoration project, including 14 individuals or groups that gave funds toward specific works. 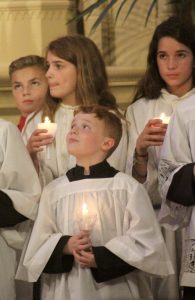 Bobby Morris, a fifth-grader at St. Vincent de Paul School in Peoria who was among about 70 candle-bearing altar servers taking part in the Founder’s Day Mass, admires the sanctuary ceiling of the newly restored St. Mary’s Cathedral. (The Catholic Post/Jennifer Willems)

In closing remarks, Bishop Jenky said donors to the restoration project sacrificed “like the generations that went before us” to make the cathedral a place to invite everyone to a deeper encounter with God. He noted the restoration was done without the need for a diocese-wide fundraising effort, thanks to the “careful financial planning” of diocesan leaders including Patricia Gibson, chancellor.

Bishop Jenky thanked all involved in the restoration as well as in planning the five-day “Founder’s Weekend” observances, which included tours of both St. Mary’s and the diocesan museums. The museums are now featuring an exhibit on Bishop Spalding.

Msgr. Deptula then led a round of applause for Bishop Jenky, noting the bishop’s love for the Diocese of Peoria and the cathedral.

Bishop Jenky invited the assembly to ask God “to renew our lives as this building was renewed.”

EDITOR’S NOTE: More photos from the Founder’s Day Mass have been posted to The Catholic Post’s site on Facebook.