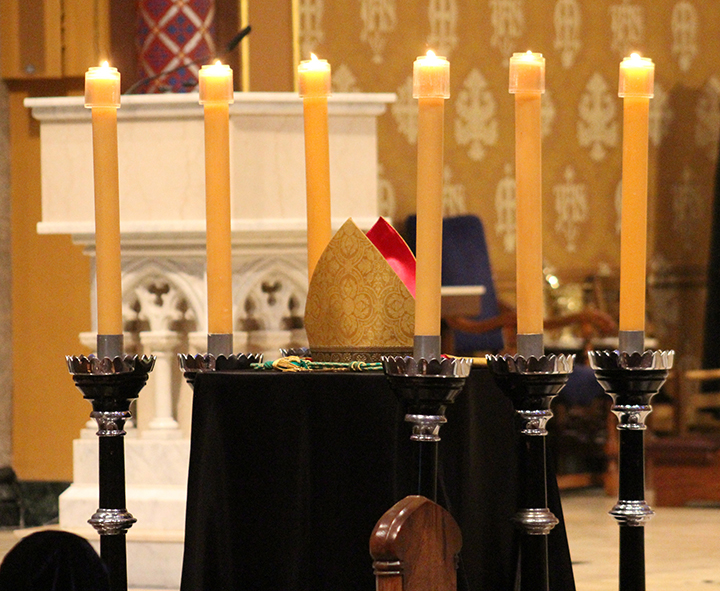 At the Requiem Mass on Aug. 24, a bishop's miter and pectoral cross were placed on a platform draped in black and surrounded by six tall candles in honor of Bishop John Lancaster Spalding, the Diocese of Peoria's founding bishop who died 100 years ago. (The Catholic Post/Jennifer Willems)

With ancient texts and chants, the people gathered in the newly restored St. Mary’s Cathedral in Peoria remembered the diocese’s first spiritual father, Bishop John Lancaster Spalding, at a Requiem Mass on Aug. 24. It was the first of several opportunities to pray and give thanks during Founder’s Weekend. 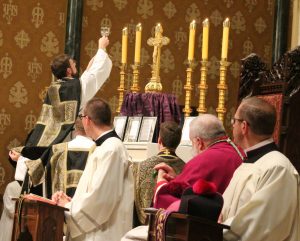 Father Alex Millar elevates the chalice during Requiem Mass celebrated in the extraordinary form at St. Mary’s Cathedral on Aug. 24, the eve of the 100th anniversary of the death of Bishop John Lancaster Spalding, the founding bishop of Peoria. (The Catholic Post/Jennifer Willems)

While the cathedral was stripped of all adornment, a platform draped in black and surrounded by six tall candles stood in the center aisle. A bishop’s miter and pectoral cross had been placed on the stand in honor of Bishop Spalding, who died on Aug. 25, 1916.

Father Alex Millar, parochial vicar of St. Mary’s Cathedral and the other Heart of Peoria churches, was the celebrant for the liturgy in the extraordinary form. The traditional Latin Mass is often called the “Tridentine Mass.”

As would have happened 100 years ago, Communion was distributed at the altar rails.

Bishop Daniel R. Jenky, CSC, the seventh successor to Bishop Spalding, attended in choro — seated at the cathedra and vested in his formal purple cassock and surplice.

During his homily, Msgr. Paul Showalter, vicar general of the Diocese of Peoria, remembered Bishop Spalding’s commitment to education for all, which resulted in the building of schools throughout central Illinois. In addition, he had championed religious freedom.

His fatherly love for his priests was well known, and Msgr. Showalter noted that one of them had written that they always went away from meetings with Bishop Spalding with a lighter heart. 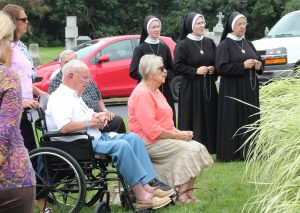 Among those praying the rosary at the Bishops’ Mausoleum at St. Mary’s Cemetery in West Peoria on Aug. 25 were John and Mary Slevin, members of St. Ann Parish in Peoria. John’s grandmother was the sister of Bishop John Lancaster Spalding, the first bishop of Peoria who died 100 years ago. (The Catholic Post/Jennifer Willems)

These were glad words for John Slevin, whose grandmother was the sister of the founding bishop. The family moved to Peoria to be closer to him and settled in St. Mark Parish.

Slevin met his wife, Mary, at St. Mark School and they were married 59 years ago. They are now members of St. Ann Parish in Peoria.

The Slevins also were present in St. Mary’s Cemetery in West Peoria on Aug. 25, to join Bishop Jenky in praying the rosary at the mausoleum where five former bishops are buried. Over the years, Bishop Spalding has been joined by Bishops Edmund M. Dunne, Joseph H. Schlarman, John B. Franz, and Edward W. O’Rourke.

Pontifical Deacon Roger Hunter of St. Jude Parish in Peoria led the group in praying the Sorrowful Mysteries of the rosary for the repose of the soul of Bishop Spalding.