Name a corporal or spiritual work of mercy and it has probably been covered by one of the 45 volunteers who were honored by the Peoria Diocesan Council of Catholic Women at its annual Volunteer Appreciation Luncheon on April 14.

“In this Year of Mercy, our diocesan parish volunteers stand out in their tireless service to our Lord,” said Agnes Christmas, DCCW president, before the certificates of appreciation were presented at the Spalding Pastoral Center in Peoria. “They certainly stand out in their numerous works of mercy.” 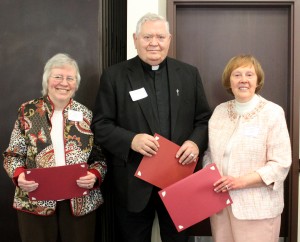 For their work to organize the Mary and Monica Helpers at St. Edward Parish in Chillicothe, Gail Kruse (left) and Diane Hahn received the Imperative Award at the DCCW’s Volunteer Appreciation Luncheon April 14. Shown with them is Msgr. Dale Wellman, DCCW spiritual adviser. (The Catholic Post/Jennifer Willems)

She said that includes “fixing and repairing just about everything throughout the parish,” as well as teaching religious education, leading Cursillo, cleaning the church and laundering altar linens, serving funeral dinners, helping with school and parish fundraisers, and serving as lectors and extraordinary ministers of holy Communion, among other things.

Click here for a story on honorees from Colona and Atkinson who are sisters.

The volunteers came from 28 parishes throughout central Illinois and for the first time included a man, Dennis Thompson of St. Louis Parish in Princeton, who was nominated for his work to enlarge the kitchen in the parish hall, and plan and construct the new parish greenhouse.

The DCCW also chose out Gail Kruse and Diane Hahn of St. Edward in Chillicothe to receive its Imperative Awards, while Joan Weber was recognized with the Diocesan Award. Her name has been forwarded to the National Council of Catholic Women to be considered for its Our Lady of Good Counsel Award.

Kruse and Hahn were honored for their efforts to establish the Mary and Monica Helpers, the newest Council of Catholic Women in the Diocese of Peoria. At the suggestion of Father Keith Walder, pastor, members pray for at least two minutes each day for people who have fallen away from practicing their faith in the hope that they will return.

“It doesn’t seem like much, but little things can add up,” said Hahn, who serves as president. She told The Catholic Post that 10 people praying for two minutes each day for a year will have given five days to prayer by the end of that time, for example.

The group takes its inspiration from Mary, the mother of Jesus, who always led people to her Son, and St. Monica, who prayed continuously for the conversion of her son, now known as St. Augustine. 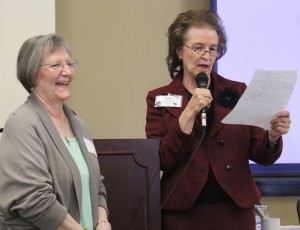 Agnes Christman, president of the Peoria Diocesan Counciil of Catholic Women, makes Joan Weber laugh as she shares the many reasons why the longtime volunteer was being honored with the DCCW’s Diocesan Award. (The Catholic Post/Jennifer Willems)

Members meet regularly for continuing education and spiritual formation, and are devoted to helping the pastor and the parish in whatever way they are needed. For more on the Mary and Monica Helpers, including the prayers they suggest for those who have fallen away from the Catholic faith, click here.

Joan Weber’s list of accomplishments includes helping to start the Christ Child Society of Central Illinois. She has been chair of the Bishop’s Commission on Women in the Church and in Society and continues to be involved with that group; president of the DCCW and longtime author and coordinator of Council Comments column for The Catholic Post; and director of the Chicago Province of the National Council of Catholic Women.

She is also an active member of St. Jude Parish in Peoria, where she is involved in the respect life committee and the Society of St. Vincent de Paul.

Christman praised Weber for being a mentor and “true role model” for women around the diocese and beyond.

A MILLION ACTS OF MERCY

Guests at the luncheon included Rose Martinet of the Diocese of Joliet, who is the current director of the Chicago Province. She encouraged members of the women’s organizations around the diocese to make certain they report their corporal and spiritual works of mercy to the NCCW, which hopes to tally 1 million acts of mercy for the Jubilee Year of Mercy.

Msgr. Dale Wellman, longtime spiritual adviser to the DCCW, prayed that the volunteers would be blessed for their goodness, dedication and charity.

“May you encourage others by your example to touch the lives of those who are in need,” he said. “It is in doing that that we carry on the work of the Lord and bring about his message of salvation to the world.”