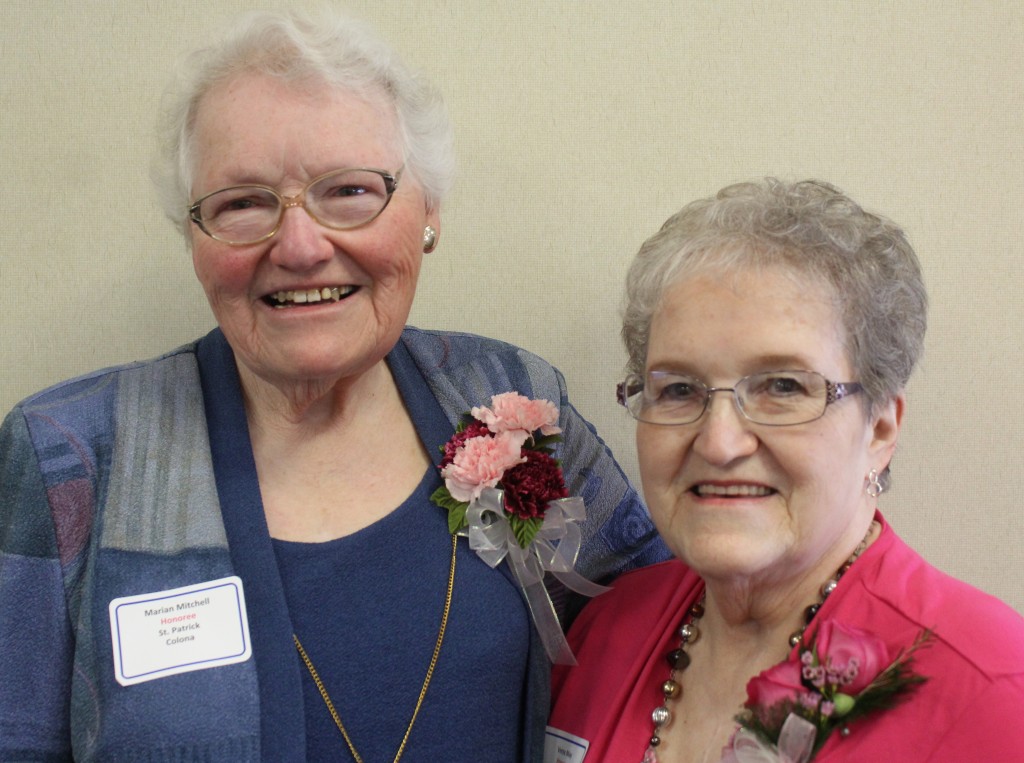 Marian Mitchell (left) of St. Patrick in Colona, and Verna May of St. Anthony in Atkinson are sisters who were among the volunteers honored by the Peoria Diocesan Council of Catholic Women this year. (The Catholic Post/Jennifer Willems)

EDITOR’S NOTE: Following is a snapshot of two of the 45 volunteers honored by the Peoria Diocesan Council of Catholic Women during its annual Volunteer Appreciation Mass and Luncheon on April 14.  Click here for a story on the event and a complete list of honorees.

Ever since she retired, Marian Mitchell of St. Patrick Parish in Colona can be hard to find. Her children don’t worry, though.

“If you can’t find Mom, call church,” they say.

“Anything that was open I did or anytime I saw something that I can do that nobody else is doing, I’ll do it — like going in and cleaning the kitchen,” she told The Catholic Post. “I found the secret is keeping busy.”

“If you don’t become involved with something going on, you don’t get acquainted. You don’t get to know who you’re sitting by every Sunday.” — Marian Mitchell

Mrs. Mitchell and her sister, Verna May of St. Anthony Parish in Atkinson, credited their late mother, Loretta Rockwell, for showing them the importance of sharing their time and talent with others.

The family lived in the Quad Cities and belonged to St. Anne Parish in East Moline. The sisters watched as their mother helped to raise money for the new church and other parish needs.

“Mom was always with the ladies — quilting, working, doing something for the bazaars,” Mrs. May said.

She accomplished much despite the fact that she continued to deal with the effects of childhood polio throughout her life. Mobility issues didn’t stop her from driving her daughters to the homes of Altar and Rosary Society members to collect the dues: $1.20.

At one time the sisters both belonged to the Colona parish and each served as president of the Altar and Rosary Society. Mrs. Mitchell said that in addition to helping others, she wanted to join so she could get to know people.

“If you don’t become involved with something going on, you don’t get acquainted,” she said. “You don’t get to know who you’re sitting by every Sunday.”

Working 40 hours a week and caring for her five children kept her busy and she didn’t want to lose that momentum after she retired.

“I enjoy doing for other people,” said Mrs. Mitchell, who is known for taking bouquets of flowers to people in area nursing homes, using a baby food jar for the vase.

“It was just perfect to put on a nightstand,” she said. “When I couldn’t take something I’d take a card.”

“I’m doing the Lord’s work. I feel good when I’ve done something. I’ve met so many good people. I think I’m doing what I’m supposed to be doing.” — Verna May

“I love doing it all,” said Mrs. May, who has helped out “wherever my knowledge and talent has taken me. Right now she is concentrating on the centennial celebration for St. Anthony Church.

“I’m doing the Lord’s work. I feel good when I’ve done something,” she said. “I’ve met so many good people. I think I’m doing what I’m supposed to be doing.”