Dennis and Beth Doolan of St. Patrick Parish in Washington were among 115 couples observing their 25th or 50th wedding anniversaries in 2019 to renew their marriage vows at St. Mary's Cathedral during the diocesan Anniversary Mass on Sept. 29. Behind them are Bill and Carolyn Kraft of St. Jude Parish, Peoria. Both are golden anniversary couples. (The Catholic Post/Tom Dermody)

It rained on John and Maureen Borowy’s wedding day 50 years ago. “My mom always said it was a blessing from heaven and my grandma said that, too,” said Maureen, as she and her husband stood on a wet sidewalk outside St. Mary’s Cathedral in Peoria moments after taking part in the Diocese of Peoria’s […] 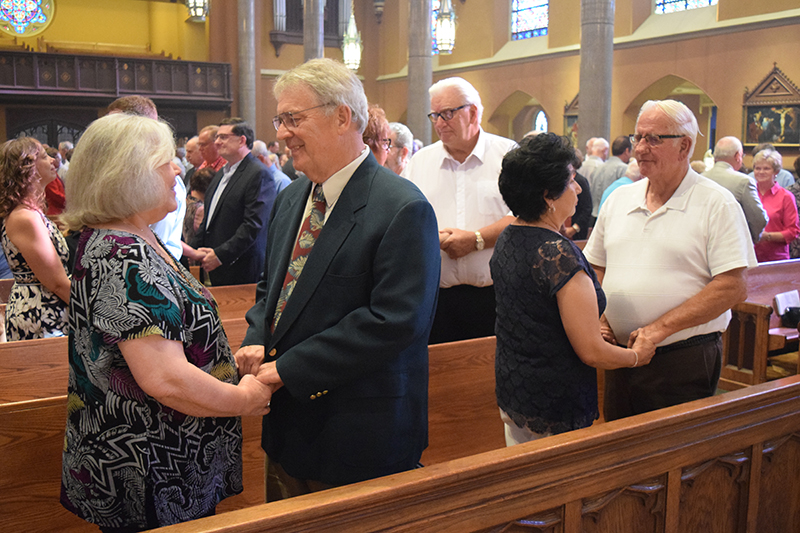 Among the couples from throughout the diocese renewing their marriage vows during the Anniversary Mass at St. Mary's Cathedral in Peoria on Sept. 24 were (left) Chuck and Mary Ann Voreis of Utica , members of St. Patrick Parish in LaSalle, and Donald and Carmen Hodge of St. Thomas the Apostle Parish, Peoria Heights. Both couples are observing their 50th wedding anniversary in 2017. (The Catholic Post/Tom Dermody)

Whether they met in kindergarten, at college, on a blind date, or in some other way, the anniversary couples celebrating milestone years of marriage Sept. 24 at St. Mary’s Cathedral acknowledged they’ve had help along the way. “I think we need to remember there is always three in a marriage: he and I and God,” […]