The stories of how married couples first met can sometimes be attributed to chance or coincidence, but Don Huber has another word for what brought him together with his wife of 50 years, Marty: “God-incidents.”

“I knew that first evening she was special,” said Don, recalling how he — then a graduate student at the University of Wisconsin in Madison — met Marty, just a freshman, at an agriculture fraternity social on campus. 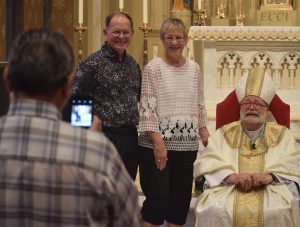 Fernando Rios takes a photo of friends Don and Marty Huber as they pose with Bishop Jenky after the Anniverary Mass. Both the Hubers and Rioses (Fernando attended with wife Wilma) are members of Christ the King Parish, Moline, and celebrated their golden wedding anniversaries in 2016. (The Catholic Post/Tom Dermody)

The Mass was celebrated by Bishop Daniel R. Jenky, CSC, who welcomed the couples — marking either their silver or golden anniversaries in 2016 — by saying they “image God’s love by their love for one another.”

In his homily, the bishop read from an exhortation on marriage that was formerly part of all wedding Masses. “We have never needed its wisdom more than we need it today,” said Bishop Jenky of the exhortation, which emphasized marriage as a holy institution established by God and called couples to “a life of self-sacrificing love” based on Christ’s example.

The bishop personally greeted each couple following the Mass, posing for photos in the sanctuary of the newly renovated cathedral. The couples then enjoyed a reception at the Spalding Pastoral Center, where they were presented certificates signed by Bishop Jenky.

At the reception, the couples informally shared the stories of their married lives with one another — telling of children, grandchildren, anniversary celebrations held or anticipated, and how they met.

Which brings us back to the “God-incidents” of the Hubers, who were seated with longtime friends Fernando and Wilma Rios, also members of Christ the King in Moline and also a golden anniversary couple. 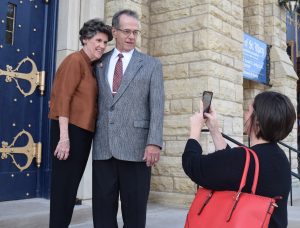 Golden anniversary couple Robert and Karen Smith of Holy Cross Parish in Champaign pose on the steps of St. Mary’s Cathedral for a photo taken by their daughter, Angela, following the Anniversary Mass. (The Catholic Post/Tom Dermody)

“By Christmas we were done,” said Marty of their early courtship. Faced with religious differences — Marty was not Catholic at the time — Don “threw me back into the mix,” she added with a smile. Don eventually began dating someone else.

Then came a chance meeting a few years later in a parking lot when Marty was on campus with her father. She introduced Don and asked “How’s what’s her name?” When Don said that relationship had ended, something new and lasting began.

Across the table, the Rioses had their own “God-incident” story. Fernando and Wilma were both born and raised in Bolivia. But they met at the home of Wilma’s uncle in Iowa City.

“I was supposed to be in Iowa City for three months and then go back home before Christmas,” said Wilma. But after meeting Fernando, a former professional soccer player in Bolivia working with John Deere in Moline, “I didn’t go home.”

“We met in October,” she said. “He asked me to be his wife in February, and we were married in June.”

The Hubers and the Rioses have shared family, faith, and friendship for decades not only through their parish but the Christian Family Movement and later Cursillo. The Hubers were on the national board of the Christian Family Movement, a national network of parish/neighborhood small groups of families whose Blackhawk Federation in the Quad Cities once embraced more than 200 people.  Meanwhile, all have made Cursillo weekends and  Fernando was part of the group that began Spanish Cursillo about a decade ago.

Asked their secrets to a lasting marriage, Don Huber said “making the right choice first of all” and then “knowing from the beginning that this is a forever commitment.”

“You have to trust each other, and you have to talk,” he told The Catholic Post. 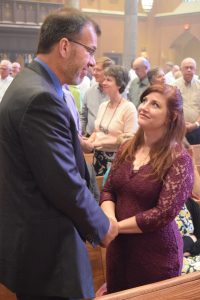 David and Stefanie Rupert of Peoria renew their wedding vows during the Anniversary Mass on Sept. 25 at St. Mary’s Cathedral in Peoria. The Ruperts are observing their silver anniversary in 2016. (The Catholic Post/Tom Dermody)

At a nearby table, similar advice was shared by golden anniversary couple Ralph and Lucy Wilshusen, members of Our Lady of Guadalupe Parish in Silvis.

“When we first got married, we decided that once a month, if anything was bothering us, we’d air it then,” said Ralph. “The other person wasn’t going to get mad or anything like that. It was just ‘This is bothering me’ and we tried to be up front with each other.”

“We pray together every night,” added Lucy. “We never go to bed angry with each other. And we laugh a lot . . . find the humor in things.”

By coincidence, or something beyond, the diocesan Anniversary Mass was celebrated just one day off the 50th anniversary of the Wilshusens’ wedding date — Sept. 24, 1966.

Their marriage was blessed during a Mass at the Silvis parish the previous night and they joined family and friends for dinner. In Peoria, after renewing their vows at the Anniversary Mass, they were joining one of Lucy’s nursing classmates for dinner.

“It’s been a wonderful weekend, beyond all of our expectations,” said Ralph.

A choir from Holy Family Parish in Peoria joined the cathedral schola to lead music for the anniversary Mass. Concelebrating the Mass with Bishop Jenky was Father Gregory Nelson, pastor of St. Mary Parish in Bloomington.