Dennis and Beth Doolan of St. Patrick Parish in Washington were among 115 couples observing their 25th or 50th wedding anniversaries in 2019 to renew their marriage vows at St. Mary's Cathedral during the diocesan Anniversary Mass on Sept. 29. Behind them are Bill and Carolyn Kraft of St. Jude Parish, Peoria. Both are golden anniversary couples. (The Catholic Post/Tom Dermody)

It rained on John and Maureen Borowy’s wedding day 50 years ago.

“My mom always said it was a blessing from heaven and my grandma said that, too,” said Maureen, as she and her husband stood on a wet sidewalk outside St. Mary’s Cathedral in Peoria moments after taking part in the Diocese of Peoria’s 25th and 50th Anniversary Mass there on Sept. 29. 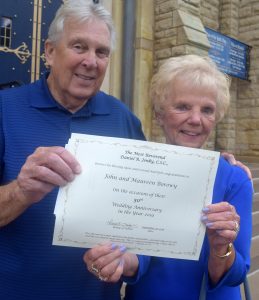 John and Maureen Borowy of Blessed Sacrament Parish in Morton show the signed certificate of blessing and congratulations from Bishop Jenky they received at the diocesan Anniversary Mass on Sept. 29 at St. Mary’s Cathedral in Peoria. The Borowys observed their golden anniversary on May 10. (The Catholic Post/Tom Dermody)

“And we feel we have been blessed,” added Maureen. Among the blessings enjoyed by the Borowys — members of Blessed Sacrament Parish in Morton who met while they both worked for Republic Steel in Chicago more than five decades ago — are their two children and four grandchildren.

So the Borowys were fine that rain was falling outside as they — led by Bishop Daniel R. Jenky, CSC — along with more than 100 other golden and silver anniversary couples from throughout the diocese, renewed their marriage vows inside the joy-filled cathedral.

The bishop greeted the couples who are observing 25th or 50th wedding anniversaries in 2019 by pointing out that they are a blessing.

“This whole diocese feels blessed by the married couples that celebrate their anniversaries today,” he said in welcoming remarks at the start of the annual Mass. “You are living sacraments of Christ’s love for His church. So you are a blessing not only to one another and to your families, but to your parishes, your priests, and your bishop.”

Invitations were sent by the Diocese of Peoria to nearly 500 anniversary couples made known to the diocese by their parishes. About 115 couples attended, and with their family and friends nearly filled the cathedral for the 3:30 p.m. Mass, which was coordinated by the diocesan Office of Evangelization and Faith Formation.

Each couple was presented a certificate signed by Bishop Jenky and bestowing his “blessing and heartfelt congratulations.”

Adding their voices to the cathedral’s organ and brass musical accompaniment was a choir from Holy Family Parish in Peoria. The choir also sang “Faith, Hope, and Love” as a Communion meditation.

In place of a homily, Bishop Jenky read a “Matrimonial Exhortation” that was formerly part of all Catholic weddings. The bishop said the text offered “a vision of what marriage in Christ is all about” and invited the anniversary couples, as they listened, to remember the promises they made at their own weddings. 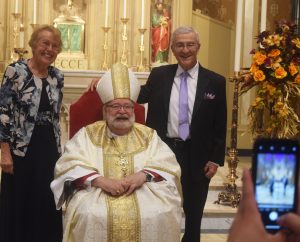 Dr. Charles and Mary LoGiudice of St. Malachy Parish in Geneseo pose with Bishop Jenky for a photograph following the diocesan Anniversary Mass on Sept. 29 at St. Mary’s Cathedral in Peoria. The LoGiudices were married 50 years ago on Aug. 23 at St. Malachy Church. (The Catholic Post/Tom Dermody)

Because God is its author, marriage is “of its very nature a holy institution, requiring of those who enter into it a complete and unreserved giving of self,” the exhortation reads. It notes that Jesus referred to the love of marriage to describe his own love for the Church, “and so he gave to Christians a new vision of what married life ought to be — a life of self-sacrificing love like his own.”

After reading the exhortation, Bishop Jenky invited the anniversary couples to stand and face one another as he led them in a renewal of their marriage vows that they sealed with a kiss.

“You have come together in this church to celebrate the day when the Lord first joined you in the sacrament of Holy Matrimony,” he told them. “It is with His help that you are able to keep mutual and lasting fidelity.”

After the Mass, Bishop Jenky returned to the sanctuary and greeted all of the couples, posing for dozens of photos.

Among them were Ron and Pat Parkins, members of Immaculate Conception Parish in Monmouth, who told The Catholic Post that it had rained on their wedding day, too. That was 50 years ago on Sept. 5 in Kahoka, Missouri, where the couple had previously met in high school. But in addition to rain, Ron had a flat tire on the way to church and had to change it in the pouring rain.

“But he made it on time and 50 years later we’re still together,” said Pat. Now the parents of four children and grandparents of 17, the Parkins know “we’ve been very blessed,” added Pat.

EDITOR’S NOTE: More photos from the 25th and 50th Anniversary Mass have been posted to The Catholic Post’s site on Facebook.