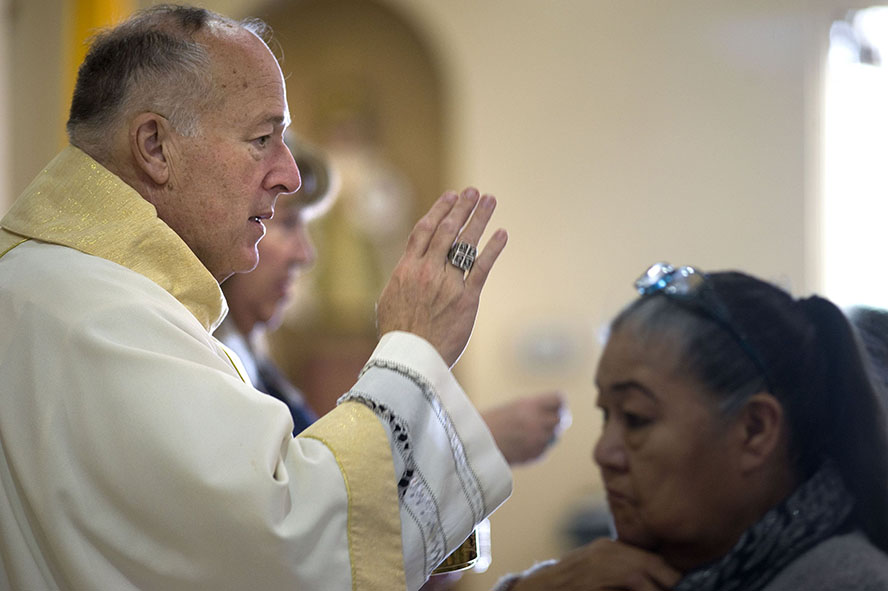 By Catholic News Service SAN DIEGO (CNS) — Cardinal-designate Robert W. McElroy told reporters May 31 that when he learned he is among the 21 new cardinals Pope Francis will create Aug. 27, “I said a big prayer.” “I said several prayers because I was stunned and so shocked by this,” said the 68-year-old prelate […] 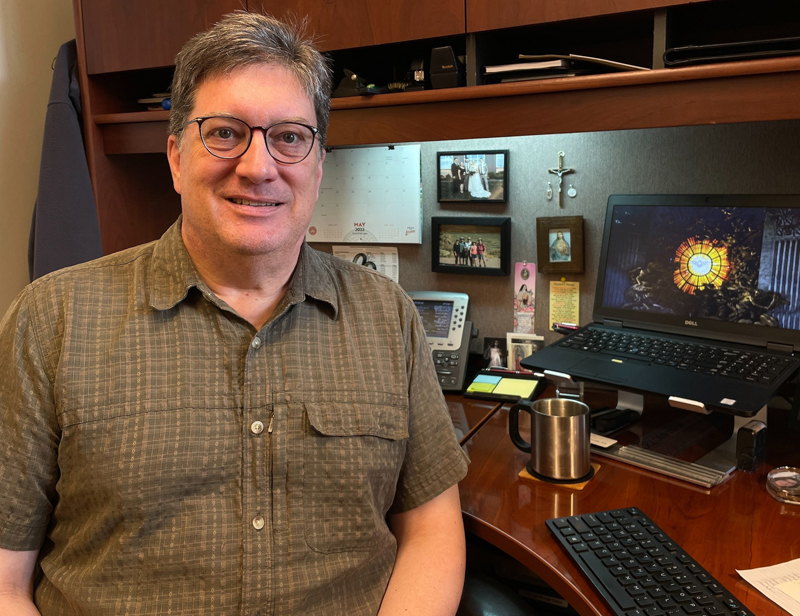 To help him integrate his faith into his work as professor and associate director of the School of Communication at Illinois State University, Dr. Peter Smudde has a crucifix and religious emblems in his workspace. He said they are also good discussion starters with the students. (Provided photo)

NORMAL — As students graduate from college, degrees in hand and hopes for a bright future in their heart, it is essential to take more than knowledge, skills and experience into the search for a job, said Dr. Peter Smudde, professor and associate director of the School of Communication at Illinois State University. “The time […]

Hopes, challenges ahead are voiced by speakers at Sanctity of Human Life Rally 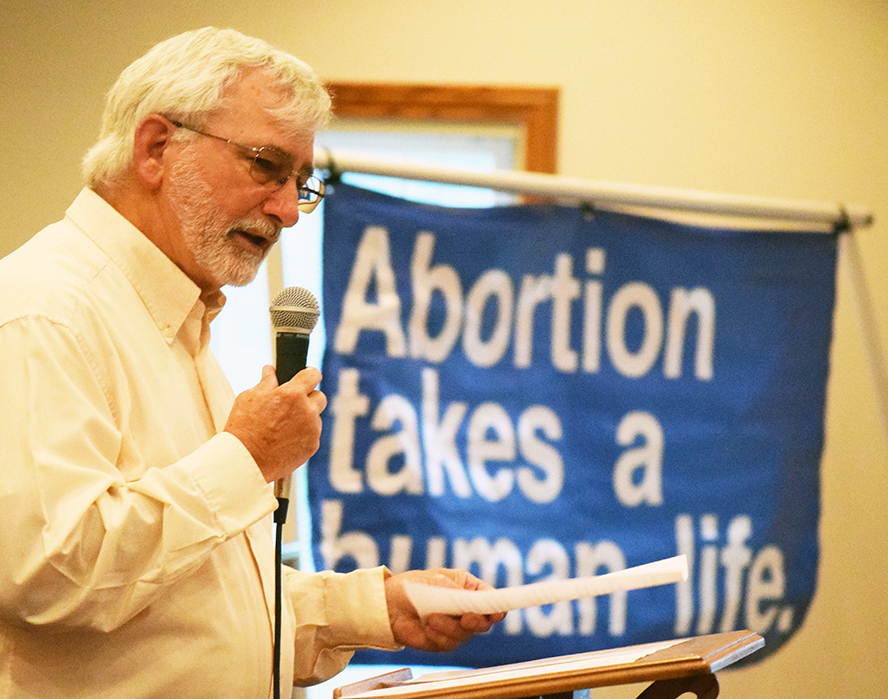 Ken Goins, president of Central Illinois Right to Life, speaks at the Sanctity of Human Life Rally on May 24 at Redeemer Presbyterian Church in Peoria. Members of the pro-life organization regularly hold the sign in the background on overpasses of Interstate 74 in downtown Peoria to share its message with those driving by. (The Catholic Post/Tom Dermody)

With anticipation high for an imminent U.S. Supreme Court ruling that could overturn the Roe v. Wade decision legalizing abortion, speakers at the Sanctity of Human Life Rally in Peoria on May 24 expressed high hopes but emphasized much pro-life work will remain no matter the outcome. “We can almost taste it,” said Monica Cline, […]

Meet the valedictorians, salutatorians of the Class of 2022 in Catholic schools 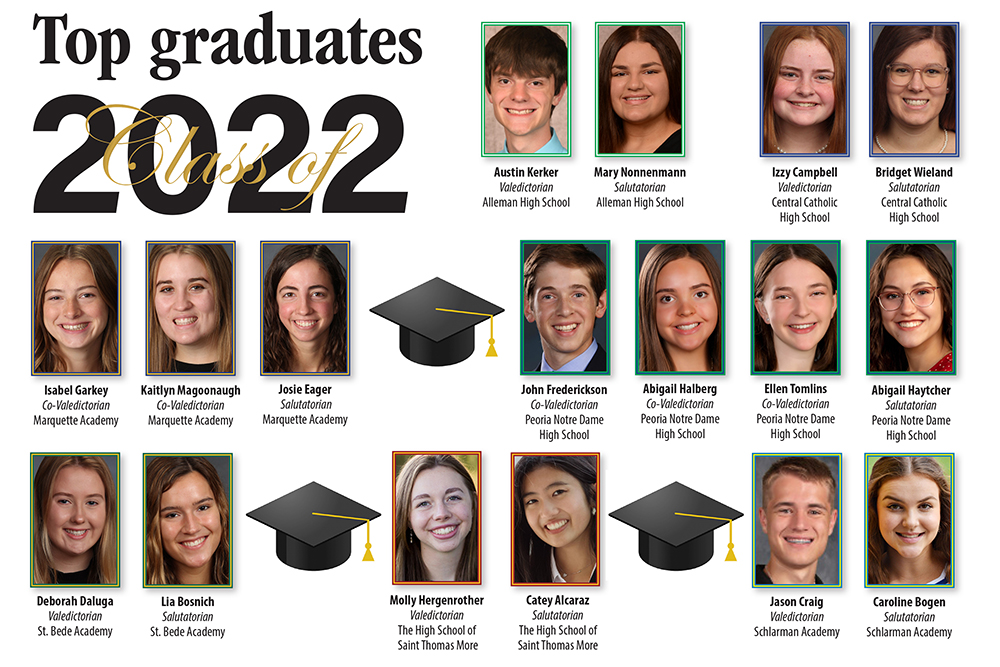 EDITOR’S NOTE: Below are photos and brief biographies of the valedictorians and salutatorians of the seven Catholic high schools and academies in the Diocese of Peoria. We congratulate them, all Class of 2022 graduates, their school staffs and families for their accomplishments and perseverance — especially through the years of pandemic. The top students were […]

Catholic Charities and its partners thanked for ‘being Christ for others’ 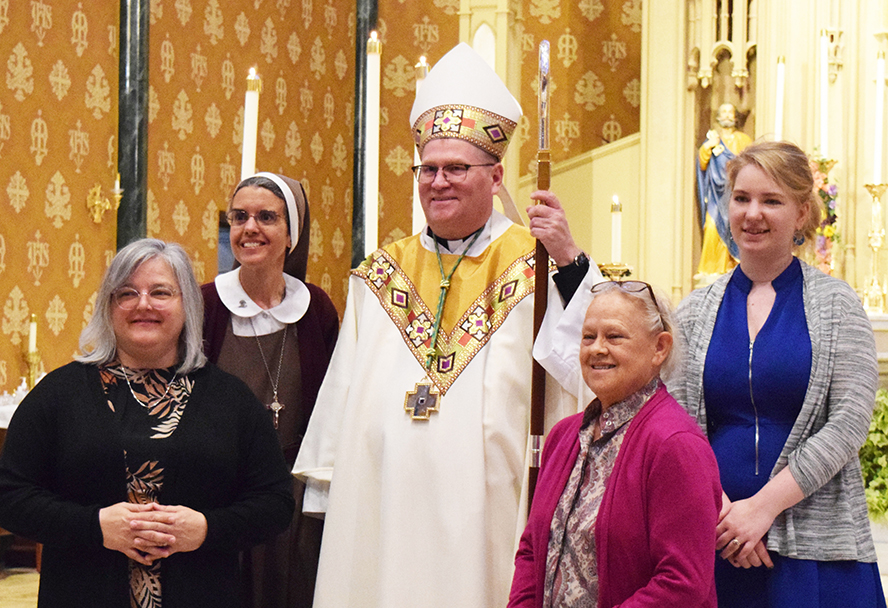 The Catholic Charities “family” in the Diocese of Peoria gathered for a day of prayer, thanksgiving, and fellowship on May 18. “It’s so overwhelming to see all of you present today,” said Sister Michelle Fernandez, SCTJM, executive director, prior to a luncheon at the Spalding Pastoral Center recognizing staff, volunteers, and others who partner with […] 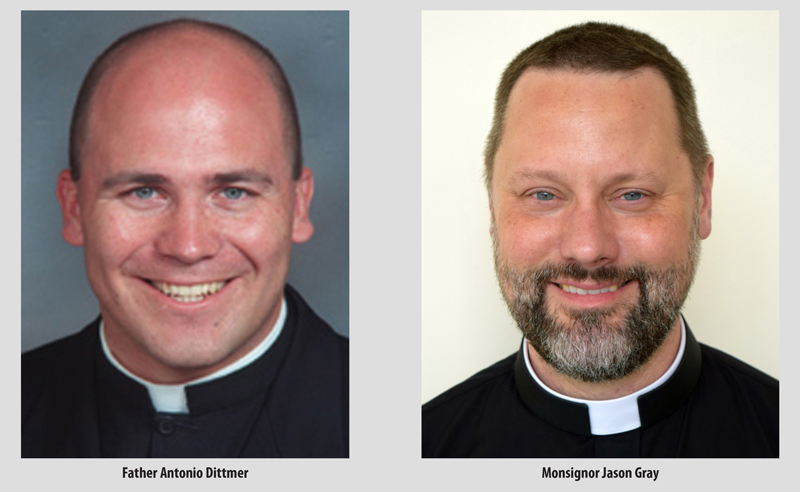 Ten priests serving in the Diocese of Peoria are marking their 25th anniversary of ordination this year. Among them are Father Antonio Dittmer and Msgr. Jason Gray, who were ordained on July 12, 1997, by Bishop John J. Myers at St. Mary’s Cathedral in Peoria. They had been studying at the Pontifical North American College […] 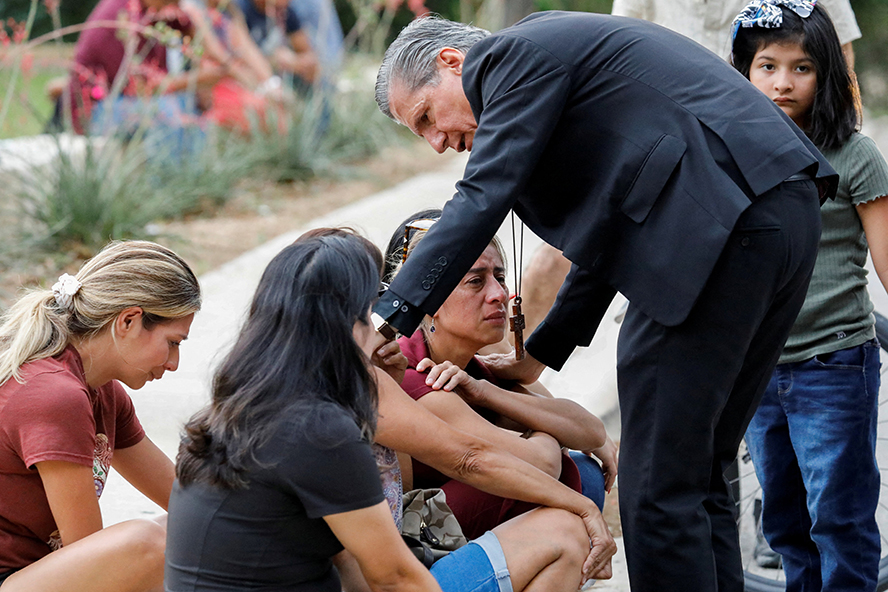 Archbishop Gustavo García-Siller of San Antonio comforts people in Uvalde, Texas, outside the SSGT Willie de Leon Civic Center, where students had been transported from Robb Elementary School after a shooting on May 24. (CNS/Marco Bello, Reuters)

By Carol Zimmermann / Catholic News Service WASHINGTON (CNS) — When news broke of the May 24 school shooting in Uvalde, Texas, San Antonio Archbishop Gustavo García-Siller was in a meeting with about 150 archdiocesan priests. The meeting was rescheduled and several priests left right away to be with people in the Texas town about 100 […]

Six silver jubilarians celebrating anniversary of ordination on May 24 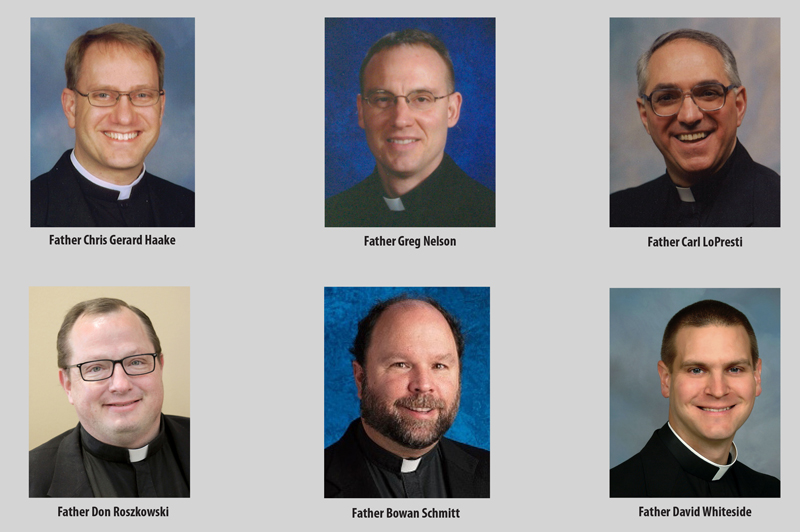 Ten priests serving in the Diocese of Peoria are marking their 25th anniversary of ordination this year. Six of them were ordained on May 24, 1997, by Bishop John J. Myers at St. Mary’s Cathedral in Peoria. They are Father Chris Gerard Haake, Father Carl LoPresti, Father Gregory Nelson, Father Donald Roszkowski, Father Bowan Schmitt […]

‘Joy in our hearts’ as four seminarians are ordained transitional deacons 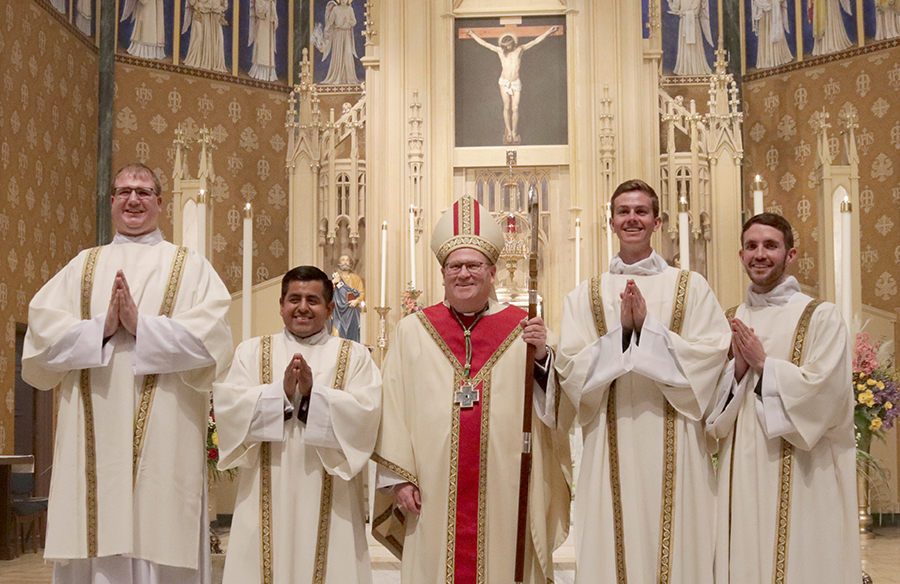 Bishop Louis Tylka stands with the four men he ordained to the transitional diaconate at St. Mary's Cathedral on May 21. They are (from left) Deacon Nathan Hopper, Deacon Ignacio Cárdenas Morán, Deacon Daniel Dionesotes and Deacon Patrick Wille. (The Catholic Post/Jennifer Willems)

The four seminarians of the Diocese of Peoria who became transitional deacons on May 21 were the first men ordained by Bishop Louis Tylka, and he passed along advice he was given at his own diaconate ordination in 1995 “when you weren’t even born.” “Serve like the Lord,” said Bishop Tylka. “Hand on what you […] 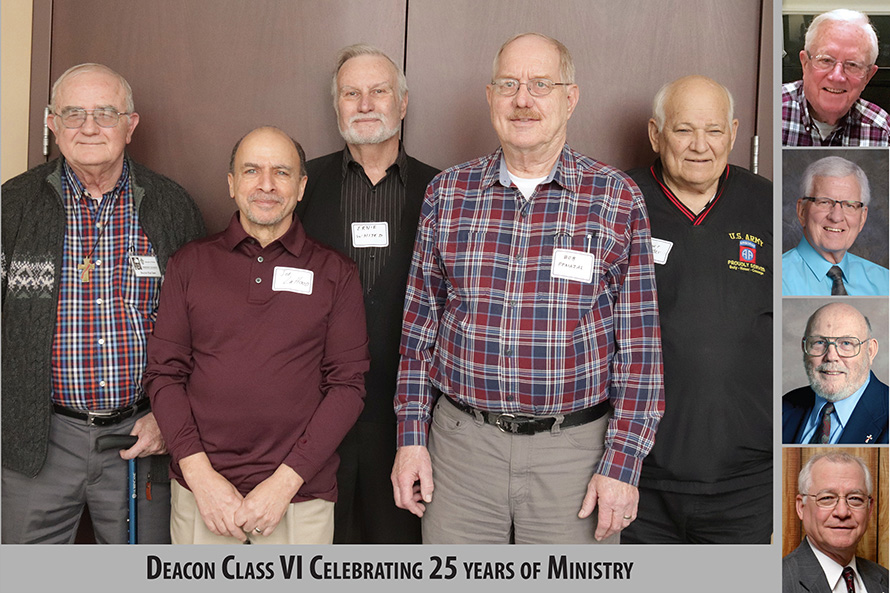 Five of the permanent deacons who are celebrating their 25th anniversary of ordination this year were present at the Deacon Convocation on March 5. They are (group photo from left) Deacon Russ Swim, Deacon Joe LaHood, Deacon Ernie Whited, Deacon Bob Pomazal and Deacon Roger Hunter. Unavailable when the group photo was taken are (top to bottom) Deacon Brendan Carolan, Deacon Dennis DeVooght, Deacon Lawrence Honzel and Deacon Nicholas Simon. (Group photo by The Catholic Post/Jennifer Willems)

EDITOR’S NOTE: This story is part of Jubilarians 2022, a 20-page section of The Catholic Post dated May 22, 2022, and honoring the priests, religious, and permanent deacons marking milestone years of ministry. — The Diocese of Peoria’s sixth class of permanent deacons gave 17 new ministers of the word, sacrament and charity to the […]