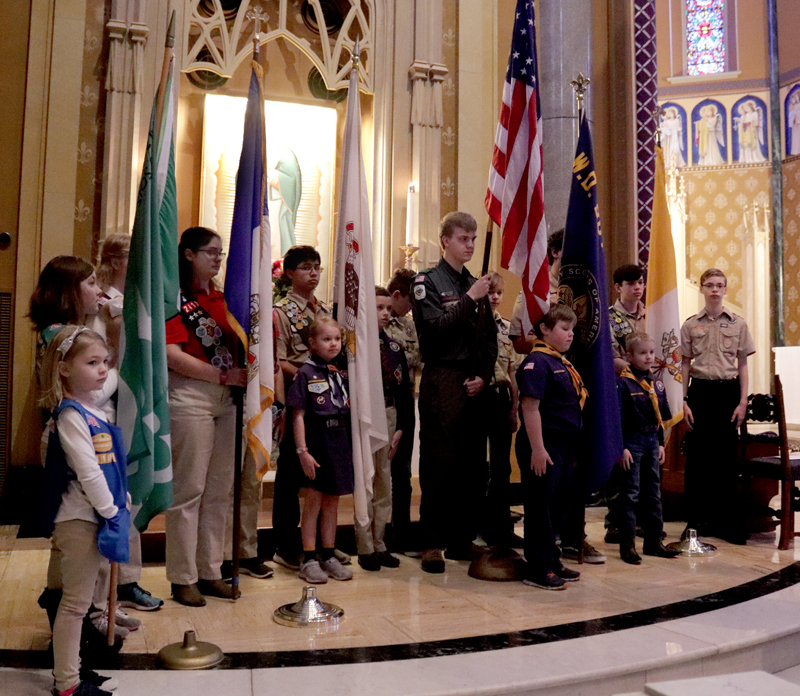 Boy Scouts, Girls Scouts and American Heritage Girls of all ages and ranks participated in the flag procession at the beginning of the Diocesan Scout Mass on Feb. 16, showing the impact Scouting has on the church and local communities. "I think it's the best program for kids," said Dr. Linda Atherton, who chairs the Diocese of Peoria's Catholic Committee on Scouting. (The Catholic Post/Jennifer Willems)

When the Boy Scouts of America filed for bankruptcy protection in federal court on February 18, many people were surprised and wondered if their local packs and troops would continue — or should continue.

The answer to both questions is yes, according to Dr. Linda Atherton of Champaign, who chairs the Diocese of Peoria’s Catholic Committee on Scouting.

“I agree with national Boy Scouts of America’s approach to say that this is a restructuring as opposed to ‘We’re closing our doors,’” she told The Catholic Post during a telephone interview Feb. 23. “It’s important to know that Scouting is going to continue and this was done to make sure that Scouting would continue to be strong.”

She also notes that the Boy Scouts have been leaders in child protection policies over the last 30 years and continue to be. “It’s a very safe place for young men and women to be.”

The abuse cases that have been cited by the national news media are from 30 years ago, she explained.

“There are very, very few cases happening now — although even one is too many,” said Atherton, who is a pediatrician. “The cases that are coming forward are from a different time.”

“I’ve watched these young men grow up over the years and what Scouting has done for them. . . . I’ve just watched it work over and over and over again.” — Linda Atherton

“So all Scout leaders are checked out through both systems,” she said.

Scout policies say that an adult may never be alone with a child and that another adult must always be present to supervise what’s going on, Atherton said, adding that everything is out in the open.

“There is no opportunity for someone to abuse a child,” she told The Post. “Someone has to break the rules for there to be a problem.”

Atherton said she sent a letter and statements from the Prairielands Council and the national organization to her parents, as have most of the troops she has heard from.

While the word “bankruptcy” sounds dire, she said the local councils are financially independent of the national Boy Scouts of America organization, with their own board of directors.

There are three councils in the Diocese of Peoria. In addition to the Prairielands Council, there are the W.D. Boyce Council, which covers Peoria and surrounding communities, and the Illowa Council for troops in the Quad Cities area.

Atherton has been involved in Scouting for 30 years, starting when her own sons got involved and needed a den leader. She has been a fan ever since.

“It is one of the few, truly values-based programs available for youth,” she said. “It has documented evidence that it changes adult outcomes.”

The Character and Merit Project study conducted by Tufts University shows that people who live by the Scout law are trustworthy and loyal, courteous and good citizens, and have a more positive attitude and higher rate of success in life, Atherton said.

Calling Catholic Scouting “youth ministry on a 24/7 basis,” she said, “If we get our kids to make ethical and moral decisions over the course of their lifetime . . . then we really are bringing up Catholic men and women of virtue. They’re not going to get that on the baseball field.”

That’s why involvement in religious emblem programs, which are designed by each denomination, are vital, said Atherton. The awards given out at the Diocesan Scout Mass, for example, where created by the U.S. Conference of Catholic Bishops and the National Catholic Committee on Scouting, which is part of Boy Scouts of America.

“They are age appropriate, catechetical and evangelical programs,” she explained. “The kids learn about their faith and how their faith lives out day to day.”

“Scouting made me a well-rounded person. It impacted my whole life.” — Mark Hilliard

The first one was the Ad Altare Dei (“To the Altar of God”), which was established in the Archdiocese of Los Angeles in 1926, according to Karen Zettler of Troop 40, based at St. Jude in Peoria. She and her husband, Peter, received the Bronze Pelican award at the Diocesan Scout Mass.

The Ad Altare Dei emblem was developed for altar servers who are also involved in Scouting and takes six months of consistent work to earn, Atherton said. There are service projects throughout the program.

It invites young men — as do all the religious awards — to take a close look at their faith and what it means to be a disciple of Jesus Christ, said Karen Zettler, who got involved in Scouting 12 years ago and has worked on the emblem programs with her sons. She is also a member of the Diocesan Catholic Committee on Scouting.

She can’t imagine Scouting without these programs since the Scout law states that “a Scout is reverent.”

“I think it’s the best program for kids,” Atherton said of Scouting. “I’ve watched these young men grow up over the years and what Scouting has done for them. . . . I’ve just watched it work over and over and over again.”

Mark Hilliard, the assistant Scoutmaster for Troop 52 at St. Mary of the Woods in Princeville, knows that to be true from personal experience. He became a Cub Scout 60 years ago and was the first recipient of the Ad Altare Dei emblem at Blessed Sacrament in Morton. He would go on to attain the rank of Eagle Scout.

“Scouting made me a well-rounded person,” he told The Post. “It impacted my whole life.”

To find out more about Catholic Scouting, visit peoria-dccs.org.