Trusting in the Blessed Mother and her promise to intercede on our behalf, dozens of people gathered in front of the Peoria County Courthouse April 13 to pray the rosary for the defeat of proposed abortion legislation in the Illinois General Assembly.

“We dedicate this rosary to give courage to pro-life legislators in the Illinois House and Senate, that they may fight hard against these abortion bills and continue to fight for the right to life for the unborn,” said Father John Verrier before leading the pro-life advocates in the Joyful Mysteries of the rosary. 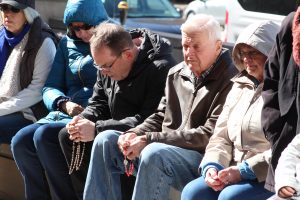 Paula and Paul Gottemoller and Dick and Arlene Heinz said it was important to be at the Peoria Pro-Life Rosary Rally on April 13. Paul said it might not be possible to turn every stone by themselves, “but if we move the stones around us and everybody moves the stones around them, we can move a mountain. That’s God’s plan.” (The Catholic Post/Jennifer Willems

“The rosary, prayed in a group like we have here, is the weapon to end abortion in our times,” he said. “Our Lady of Fatima asked us to pray the rosary every day and to do penance for the conversion of sinners, and she promised us that one day, in the end, her Immaculate Heart would triumph!”

The pastor of St. Joseph in Brimfield and St. James in Williamsfield, Father Verrier said their prayerful witness that morning was “forming a heel that will crush the head of Satan and put an end to abortion.”

The event was spearheaded by Pete Martin of St. Philomena Parish in Peoria. Helping to make it a reality were a small group of volunteers who formed the Peoria Pro-Life Rosary Rally Committee.

The group collected contact information so participants could be notified about future pro-life events. Petitions were also available for people to sign.

The prayer focused on House Bill 2467 and Senate Bill 1594, which would repeal the Illinois Parental Notice of Abortion Act, a law requiring that a parent or legal guardian to be informed when a minor seeks an abortion.

Rally participants also prayed for the defeat of HB 2495 and SB1942, which are being called the Reproductive Health Act. This would make abortion a fundamental right in the state of Illinois and is said to be more extreme than Roe v. Wade in its scope.

The Illinois General Assembly has been on a break for two weeks and the legislation is on hold, but things can change quickly, said Dan Bohan, vice president of Central Illinois Right to Life.

“So it’s a good idea to contact your representatives in the state government and let them know that you are against these acts,” he said.

“The commitment of the governor to make Illinois the premier abortion state and to draw people to Illinois to have their abortions” is what drove Martin to take action now.

“We need to be faithful to Jesus, to his mother, and to ask for her intercession and expect miracles,” he told The Catholic Post, adding, “We should not be surprised when they happen.”

Martin said he is seeking nothing less than “an end of abortion in our lifetime.”

“Prayer is the answer,” said his wife, Kathryn. “We’re here to lift one another up, to encourage one another to keep going. That’s important, that we keep going.”

“As soon as I saw the notice for the rosary rally I thought, ‘This is important. This is where we can do the most good, is through prayer,” she said, calling the rosary “our secret weapon.”

“I think it’s going to be a long road. We can’t give up,” Hermes said.