Six priests from various nations in Africa began service in parishes of the Diocese of Peoria in recent months. Most learned about our diocese through priest friends in their home dioceses or religious communities already serving here.

All are grateful for the welcome they have received.

“My first months spent in America have been full of discoveries, joy and surprise,” said Father Odilon Kofi Amenyaglo, 34, a priest of the Society of African Missions from Togo, West Africa, who since late November has assisted at five faith communities — in Seneca, Earlville, Grand Ridge, Marseilles and Ransom — already being served by priests from his community.

“I was happy and amazed to see how parishioners of the five churches welcomed me in their midst,” Father Odilon. “They are very friendly and really appreciate my stay. My prayer and hope is that my stay and pastoral work among the people of God in the Diocese of Peoria be a successful one.”

Msgr. James Kruse, vicar general of the Diocese of Peoria, said it was a coincidence of immigration regulations that the latest priests from Africa arrived at about the same time. He noted that, like the 11 priests from Africa already serving in the diocese, they bring a wide variety of pastoral experiences and education.

For example, Father Dagobert Kabendera — a priest from Tanzania now serving the LaSalle Catholic parishes — has a doctoral degree in educational administration and planning. Father Narcisio Bagumisiriza is a former vicar general of his home diocese of Kabale, Uganda. Father Remigius Ntahondi ministered to refugees fleeing genocide in Burundi, which neighbors his native Tanzania.

While the priests from Africa are helping here, they are also mindful of the needs of their home dioceses and hope to bring ideas and the support of new friends when they return. Father Narcisio — who is serving in Champaign, Ivesdale, and Tolono — notes that Catholicism was introduced in Uganda only relatively recently.

“We have lots of needs including the education of young people, support of orphans and widows, construction of chapels, etc.”

Here are brief profiles of the new priests from Africa: 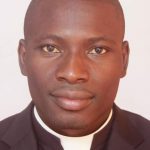 Interesting fact: After taking his first oath as a member of the Society of African Missions and prior to his theology studies, he spent a year in Egypt for missionary experience. “I learned Arabic in an Islamic dominated culture and I discovered true joy of serving God with marginalized people and Christian minority.”

Quotable: “I came to America during winter and you can’t imagine my joy of seeing snow for the first time. A parishioner even took me for a day skiing where I learned to ski. Dressed up in ski garment, I was walking like an astronaut.” 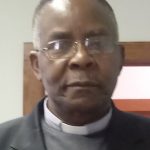 Interesting fact: This is Father Narcisio’s third extended period in the Diocese of Peoria. He is a former parochial vicar of St. Patrick, LaSalle, in the mid-1980s and spent a sabbatical year (2007) at Sacred Heart, Moline.

Quotable: “I enjoy working among the American Catholics of Peoria. Their lovely singing in liturgy, and orderly celebrations of Mass in beautiful church buildings kept in my memory and made me happy. I hope to serve, rest, meet people, and learn some skills in technology which is so highly advanced here, including computers and use of cellphones!” 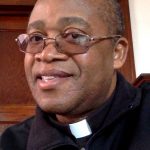 Among past assignments: Parish parochial vicar, vice rector and teacher at diocesan minor seminary; formator of seminarians at major seminary; headmaster at secondary school; professor and lecturer at Catholic University of Eastern Africa in Nairobi, Kenya.

Interesting fact: Father Dagobert earned a doctoral degree in educational administration and planning from the Catholic University of Eastern Africa.

Quotable: “I became interested in the Diocese of Peoria through my friend and classmate Father Johndamaseni Zilimu (pastor of Saint John Paul II Parish in Kewanee). I visited him from June to August of 2017 and I felt I could do missionary work in this diocese.” 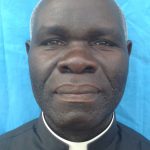 Quotable: “As a priest I hope to share my experience in this ministry by preaching the Gospel and at the same time to serve all those who are in need of spiritual goods.” 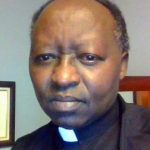 Among past assignments: missionary priest in Diocese of Muyinga, Burundi, until outbreak of genocide in 1994; director of diocesan catechetical center for Rulenge-Ngara; pastor; graduate studies in religious education and pastoral ministry at Boston College; parish service in Diocese of Burlington, Vermont.

Interesting fact: After returning from Burundi, Father Remigius continued to serve Burundian refugees in different camps in his home diocese.

Quotable: “I hope I will utilize my energy to serve the people of God in this diocese as far as the Almighty gives me more health.  At Holy Cross I have enjoyed the spirit of togetherness, love, sharing talents and self-giving in all aspects as a community and as a Church at large.” 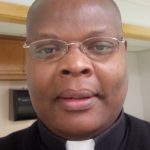 Among past assignments: Parish parochial vicar and pastor; studied at Duquesne University in Pennsylvania.

Interesting fact: Father John’s first month in the Diocese of Peoria last November was spent at parishes in Peru.

Quotable: “I’m more than happy to be in this part of the country and very much appreciate warm welcoming moments I have received from the brother priests and lay faithful that I have so far encountered during the past few months I spent in the diocese.”

Following is a list of priests from the African continent who preceded them and are continuing service here:

Father Byabato and Father Zilimu have been incardinated and are now priests of the Diocese of Peoria.